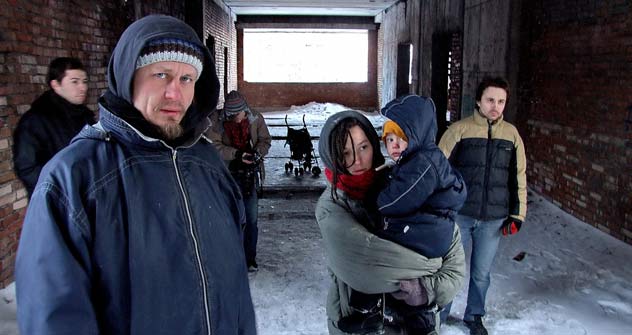 The work of the art group Voina (War), which includes a 213-foot phallus and overturned police cars, makes it clear the group has something to say. Now it has received a state prize for its efforts.

For the St. Petersburg police, the night of Jun. 14, 2010 turned out to be far from quiet. Nine young people—dressed entirely in black, wearing masks and armed with canisters of white paint—stormed the Liteiny Bridge in the very heart of the Northern capital. The bridge is raised every night and lowered only at dawn. The raising of the bridge takes exactly 40 seconds.

The stunt planned by the nine artists took only 23 seconds. As they fled into the night, they left behind on the raised bridge a 213-foot-tall painted phallus—staring straight into the windows of the St. Petersburg headquarters of the FSB.

Created in 2007, Voina has an estimated 60 members or more, but its driving force is a triumvirate: the philosopher Oleg Vorotnikov, his physicist wife Natalia Sokol and Leonid Nikolaev, also known as Lyonya Choknuty (Crazy Lyonya), who was most recently employed by a company that manufactures heating equipment. The phallus stunt earned him 48 hours in jail. His action was qualified as minor hooliganism and he was released.

Crazy Lyonya is not easily frightened. Soon after the phallus action, he was seen with an upside down blue bucket on his head taunting a Special Services car as it passed the Moscow Kremlin: This was a protest against the flashing blue lights on the roofs of government cars, which give them the right of way over all other drivers on Moscow roads.

“Voina is merely reflecting popular opinion,” said philologist Alexei Plutser-Sarno, who is also a member of Voina, although recently he has taken only a passive part in their actions. (after one of Voina’s stunts he crossed the border into Estonia, to be on the safe side).

Voina’s most effective stunt to date was directed against insufficient reforms inside the Ministry of Internal Affairs. Voina turned the public discussion into a performance, which took place on Palace Square in St. Petersburg.

At night the square is patrolled by police, while patrol cars are stationed on all adjacent streets. Vorotnikov and Sokol’s two-year-old son rolled a ball under one of those patrol cars, after which four activists turned the car over.

No one is saying just how many patrol cars were overturned by Voina that night but the importance of the act lies in quality, not quantity. The activist artists wanted to set an example and show how badly Russia’s police force needs radical and uncompromising reform.

This stunt, known as “The Palace Coup,” landed Voina in court. The police did what some people said they should have done long ago: they pressed charges of vandalism against Voina. Vorotnikov and Crazy Lyonya spent the next four months in prison. If British street art Banksy had not posted bail, they would be there still. They are currently awaiting the court’s decision.

A heated debate about art

According to heated debates on the Internet, not everyone in Russia shares Banksy’s opinion of Voina. But then, another group of artists proposed nominating Voina for the Innovation state prize for contemporary art. Andrei Erofeyev, the curator of the exhibition “Religion! Watch out!, who has also appeared in court to defend his artistic sensibilities, said: “Gigantic graffiti as a symbol of protest deserves a prize.”

The Voina activists boycotted the award ceremony since the prize was given by one of their archenemies — the Ministry of Culture. After the prize was awarded, bureaucrats from the ministry panicked and wrote an official letter to the effect that they had nothing to do with the decision to award the prize to Voina.

Many established artists have also become involved in the debate. Painter Ilya Glazunov, whose studio is located a stone’s throw from the Kremlin, said: “To paint a sexual organ on a bridge, what sort of art is that? That has absolutely nothing to do with art!”

Art historian Iosif Bakshtein disagrees: “Not all of Voina’s stunts are synonymous. Many are intended to create a scandal, which for Russia today is a rarity. Voina is sending society important impulses.”

Indeed this is Voina’s aim. “We want to stir people up,” said Oleg Vorotnikov. “And we don’t need a government, that’s an obsolete form of social system.” His wife was still more specific. “We want to overthrow Putin’s regime,” Sokol said. Despite these loud political declarations, both Vorotnikov and Sokol still consider themselves only artists.

Activists from the pro-Kremlin youth movement Young Russia think otherwise. Twenty-year-olds protested outside the Ministry of Culture against the awarding of the prize to Voina. In their opinion, Voina members are not artists but extremists. In the case of Voina, it seems especially hard to determine where art ends and politics begin.