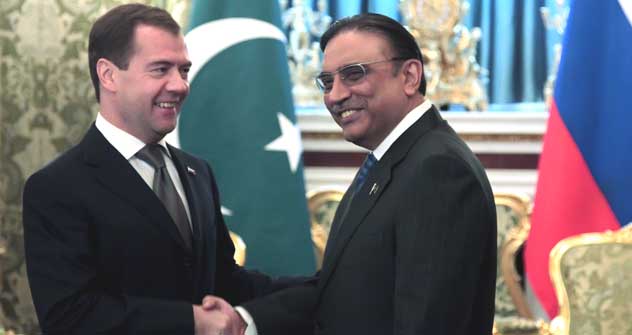 Dmitry Medvedev and Asif Ali Zardari during the meeting in the Kremlin, Moscow, Russia. May 12, 2011. Source: Itar Tass

A bunch of agreements was signed during the meeting of Russian and Pakistani presedents in the Kremlin.

Gazprom is ready to help develop resources in Pakistan, the Kremlin said in a statement after President Dmitry Medvedev met with his Pakistani counterpart Asif Ali Zardari in the Kremlin on May, 12.

Russia is also looking for a role in the construction of a gas pipeline from Turkmenistan to India, via Afghanistan and Pakistan, according to the statement.

Both sides confirmed sincere interest in joint work on the CASA 100 project of electric power transmission from Tajikistan to Afghanistan and Pakistan. Russia's Inter RAO, the state-run power utility, is also looking to build generators in Pakistan, the Kremlin said. Modernization by Russia of a steel plant in Karachi was also discussed.

The Pakistani president supported Russia's participation in the projects and called for their soonest implementation.

The leaders also pledged to work together to fight terrorism and prevent drug trafficking in Central and Southern Asia.

Zardari's visit is his first major foreign trip since Osama bin Laden was killed in Pakistan earlier this month.

In the wake of bin Laden's killing, his unpopular government faced criticism from the United States, where some politicians accused Pakistani authorities of helping the world's most wanted terrorist.

Medvedev and Zardari also discussed the turbulent situation in Afghanistan, and said they supported efforts aimed at reaching national reconciliation in that country.

The two leaders expressed "serious concerns" about the continuing terrorist threats and drug trafficking in the region.

China, Pakistan's most steadfast ally since its independence from Britain in 1947, has already helped Pakistan build one nuclear power facility in Chashma, in Punjab province.