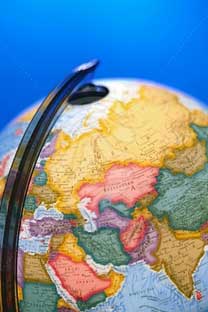 NATO, in defiance of Russia’s interests, is becoming a more active geopolitical player in the south of the CIS.

The North Atlantic Treaty Organization continues to strengthen its positions in Central Asia. The regional states actively cooperate with NATO’s programs, similar to those which Russia is initiating within the framework of the Collective Security Treaty Organization (CSTO). As stated by the Special Representative of the Secretary General of NATO for relations with the countries of the Caucasus and Central Asia, James Appathurai, Kyrgyzstan is once again involved in NATO’s Planning and Review Process (PARP), which will allow its troops to participate in peacekeeping operations.

The announcement about Kyrgyzstan and other member states’ of the CSTO involvement in peacekeeping operations was made two weeks ago by the organization’s Secretary General, Nikolay Bordyuzha. He had even declared readiness of the CSTO’s troops for military deployment. This sounds sensational, because in the almost 20-year history of the CSTO’s existence, the organization has not used its troops anywhere, other than in joint training exercises. The CSTO units were left on the sidelines even in 2005 and 2010, when Kyrgyzstan was going through an illegitimate regime change. The CSTO troops did not intervene in the ethnic conflict, which took place in the summer of 2010 in the country’s Osh Province, though help from Russia and the leadership of this organization was sought by Kyrgyzstan’s new leader, Roza Otunbayeva. Apparently, for this reason, having felt the familiar spuriousness of Bordyuzha’s organization, NATO refused, despite Moscow’s active attempts, and continues to refuse to get actively involved in the CSTO. Meanwhile, the alliance with great enthusiasm interacts with practically all of the CSTO member states. For instance, the NATO’s Planning and Review Process, in addition to Kyrgyzstan, involves Uzbekistan and Kazakhstan.

The piquancy of the situation is associated with the fact that the official Tashkent, while highlighting its peacekeeping intentions in NATO’s programs, flatly refuses to participate in similar ones within the CSTO. As it is known, when the statement of readiness of the CSTO member states’ collective peacekeeping forces to carry out tasks within the CSTO responsibility zone, as well as outside of the zone under the UN Security Council mandate, was adopted in Moscow in December of 2010, President of Uzbekistan, Islam Karimov, had objected to his country’s participation in such action. According to the Kyrgyz media reports, today, Uzbekistan has qualitatively and quantitatively increased military presence on the border with Kyrgyzstan. The border troops commander of the National Security Service of Kyrgyzstan, Zakir Tilenov, claims that more than 80 conflicts had taken place in 2009-2011 on the border between his country and Uzbekistan.

Of course, it’s unlikely that Uzbekistan will play the role of an aggressor and occupy Kyrgyzstan’s land to the south, populated with ethnic Uzbeks. James Appathurai, while speaking about the involvement of Uzbekistan, and other Central Asian states, in the PARP program, stressed that they are “obliged to observe the international law, the UN Charter, all arms control agreements, preserve the existing borders and handle disputes diplomatically, rather than militarily”. Tashkent, having basically stopped active military cooperation with Moscow within the framework of the CSTO, will hardly quarrel with NATO.

Uncontrolled inter-ethnic clashes, similar to those that took place in the summer of 2010 in the south of Kyrgyzstan, as well as the export of instability from Afghanistan to the countries of the CIS, are highly possible. And here, NATO, as well as its key member – the United States – has clearly-defined goals and tasks. At a recent meeting between Roza Otunbayeva and James Appathurai in Bishkek, agreements were reached on provision of assistance to Kyrgyzstan in strengthening its border security and the capabilities of the republic’s border guards. Meanwhile, James Appathurai had expressed NATO’s readiness to participate in major repairs of the storage facilities for missiles and artillery of Kyrgyzstan’s Ministry of Defense, making an emphasis on the country’s southern region. Roza Otunbayeva, who had traveled to Washington in March of this year, had agreed to Pentagon’s proposal to open a US military training center in the Tajikistan-and-Uzbekistan-bordering Kyzyl-Kiya and the Batken provinces. Russia is currently slow to make a decision about opening a similar training center or a new military base in Kyrgyzstan. Funds for these developments have not been provisioned in the Russian budget for the next three years.

Uzbekistan objects to the construction of Russian military bases in the south of Kyrgyzstan; however, Tashkent has not issued any statements in regard to the US and NATO’s desire to establish similar military facilities in Kyrgyzstan. In Central Asia, clashes are possible in Kyrgyzstan as well as in Tajikistan. And it’s very likely that Uzbekistan will be linked to these conflicts. Whether or not the CSTO leadership will make a decision to stop such conflicts if Uzbekistan objects – is a big question.

“NATO’s positions in Central Asia are becoming stronger. Russia, and especially the CSTO leadership, does not have a clearly-defined policy in this case, or any concise economic and military goals. And the NATO alliance, meanwhile, does. Its ambitions to participate in the resolution of conflicts in Central Asia and other regions of the CIS could results in what we are currently witnessing in Libya – a forced invasion, bombings, etc. The Russian leadership is currently discussing and outlining a system of measures on how to rescue our citizens in these types of situations. Though, one would think, Moscow could use its geopolitical weight here, then the issue regarding the protection of our citizens would disappear on its own. It would be more appropriate to organize and clearly advocate a system of national goals and geopolitical objectives in form of military assistance, military-technical cooperation, creation of new military bases, implementation of long-term economic, humanitarian, or other joint programs in the given region,” President of the Academy for Geopolitical Studies, Doctor of Military Sciences, Konstantin Sivkov, told Nezavisimaya Gazeta. For a long time, he served as the head of the Center for Military-Strategic Studies of Russia’s General Staff and developed real measures to strengthen Russia’s positions in various countries of the world. In his opinion, if we cut the profits of the oil monopolies by 10-15%, then we will have plenty of funds to militarily, politically, and economically strengthen Russia’s positions in the vitally-important zones of the CIS and the world.