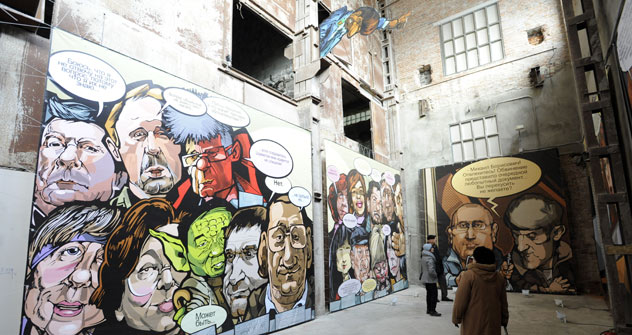 In recent years, redevelopment projects in Moscow have transformed former industrial sites into creative spaces where art and design are striving to make a worthy place for themselves in the country’s society and economy.

There are several galleries in Moscow that fit the European idea of transforming industrial buildings into space used for "art+" including ArtPlay, Art-Strelka and galleries that have repurposed the original names of their locations--Fabrica, Vinzavod and Flacon. Source: ITAR-TASS

Exiting Moscow’s Kurskaya metro station, walk across the busy square, stepping over stray dogs and around dilapidated kiosks selling cheap gadgets. Between two bare walls and at the end of the street is a worthy destination—Winzavod. This contemporary art center functions as a pleasant oasis in the heart of a gloomy industrial neighborhood on Moscow’s east side. Winzavod, featuring red brick, graffiti and trendy youth, is one of the artistic clusters born in the wake of the 2005 and 2009 Moscow BiennalesofContemporary Art and based on the Western model of transforming rundown factories into preeminent cultural sites. But contrary to their British or German counterparts, the Russian clusters didn’t spring up as a result of post-industrial redevelopment. In Western Europe, that trend was a reaction to the decline of traditional industries, the need to rehabilitate urban areas, and the growing role of intellectual and creative production in national and world economies.

“Russia hasn’t gotten there,” said Elena Zelentsova, director of the Creative Industries Agency in Moscow. “It isn’t fertile ground for the growth of a cultural economy and a creative industry in the Western sense of the word, not economically, nor socially, nor, most of all, mentally.” The country continues to suffer from its Soviet past and the difficult transition that followed. At the fall of the Soviet Union, some of the state’s cultural institutions were forcibly transferred into private hands, sometimes to new owners who did not have the means or the desire to restore and maintain them. Many theaters, museums, libraries and publishing houses didn’t survive this transformation, and the professionals in the cultural sector faced a harsh transition from salaried state employees to fierce market competition. In fact, as Zelentsova pointed out, Russia’s cultural sector remains caught in a system filled with institutions that remain unproductive and costly, even as they suffer from inadequate financing. Additionally, the Russian state still has not adopted an economic and cultural policy that would allow the term “creative industry” to be used in the country. Such a policy would put an emphasis on small and mid-size businesses that produce creative goods and services and are still struggling to grow.

Winzavod. Founded in 2007 in a former brewery and headed by Sofia Trotsenko, this contemporary art center is dedicated to the full spectrum of visual arts, and showcases them in six exposition halls, private galleries, showrooms, boutiques and café.

Artplay, the first of its kind, was founded in 2003 and is led by Sergei Dessiatov. Since 2009, the center has made its home in the former Manometer factory and brings together professionals in architecture, design, urban planning, engineering and interior design.

Garage. Founded and financed by Dasha Zhukova in 2008, this “center for contemporary culture” is one of Moscow’s largest exposition spaces and a popular place to see and be seen.

Proekt Fabrika shares its location with an active paper factory and is home to workshops and organizations representing every creative type: architecture, design, cinema, music, literature, marketing, dance and theater.

Flakon Design Factory: Starting in 2009, this former glass factory was transformed into a mixed space for business and creation. It is divided into event areas, offices, marketing and design agencies, recording studios and showrooms.

Strelka. This media, architecture and design institute takes up one of the buildings in the magnificent former Red October chocolate factory. Located in the heart of Moscow, the center is home to photography and art galleries, trendy restaurants, and editorial offices for a handful of magazines and online television channels.

All these problems, however, haven’t prevented the emergence of Russia’s hybrid, multi-functional and resolutely modern cultural and artistic centers. In Moscow, Winzavod, Artplay, Garage, Proekt Fabrika and Flakon have successfully set up shop in former factories, taking over hundreds of square meters of hangers and warehouses in order to become, in only a few years, the beating heart of the city’s cultural life and a blossoming creative industry. Huge exposition spaces play host equally well to prestigious retrospectives (Ilya Kabakov in 2008 at Winzavod) and commercial shows for emerging artists. This includes the annual Student Artfair at Artplay, which showcases student work and attracts the interest of gallery owners, art experts and the media. Bringing together creative professionals under the same roof, the aim of these clusters is to move Russia out of its “cultural provincialism” and integrate it into the international art and creation scene. These organizations are determined to promote and popularize contemporary art and design throughout Russian society, particularly in urban areas, by encouraging youth creativity.

Last year, the Strelka Institute for Media, Architecture and Design and its director Ilya Oskolkov-Tsentsiper launched a higher education program aimed at young professionals. “Before we are able to speak of an industry, it is necessary to train a solid layer of high-level professionals,” he explained, sitting at Strelka’s opulent café. “In the area of design and architecture, the Russian education system doesn’t allow for thinking globally, solving problems at a regional level or even in a city. That’s why we bring in world-renowned specialists such as Rem Koolhaas or Reinier De Graaf.”

But training capable and modern creators isn’t enough.  Russian society in its entirety must be informed in order to create a demand for these new products. “We must educate opinions and habits. Contemporary art doesn’t happen on its own. People are conservative,” said Alena Saprykina, creative director of the Artplay Design Center. Founded in 2003, it now occupies 75,000 square meters in the former Manometer factory and is home to some heavyweight design, architecture and urban planning agencies. Each of these clusters, from Garage to Winzavod, gives special treatment to interactive and educational projects with the goal of becoming genuinely popular centers of cultural production and open places for teaching and learning.

Even in the face of obstacles such as the 2008 economic crisis, Moscow’s art centers are proud of the development they’ve seen and helped produce. “We see a difference from two years ago, when we thought we were alone in needing this adventure, feeling that neither society nor the authorities were particularly interested,” said Oskolkov-Tsentsiper. “The authorities understand that we must evolve, modernize, but they don’t know to go about it, and that’s where we come in.” As evidence of this, Strelka’s think tank was chosen by the mayor of Moscow to help create and organize proposals for the redevelopment of Gorky Park, in the heart of the capital.

It will be a long road for Russia to gradually open itself to creative industries, but, said Elena Zelentsova, demand for creative culture usually outpaces supply, even in times of economic trouble.