Finding a new home in the kitchen 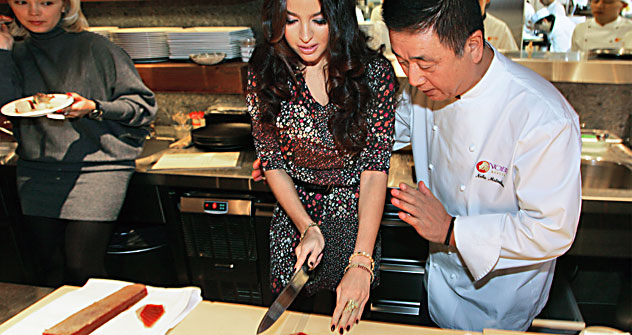 Taking lessons in gastronomy has become a popular trend among Russians, who were once known for choosing expensive restaurants based on price rather than taste.

Once a week, Yury Gusev, the co-owner of a large information technology company, puts his mobile phone down for three hours so he can enjoy himself in a restaurant. But he doesn’t put it down on the table, but rather, in the kitchen. Under the guidance of a chef, he learns the secrets of preparing béchamel sauce, cooking borscht and chopping carrots in 10 different ways.

“I’ve tried everything in my life, including the most extreme types of outdoor recreation,” Gusev said. “Over the last 10 years, my friends and I have traveled half the world and spent six figures on entertainment. But it turns out there is only one thing that truly fascinates me—cooking. I never thought that I would pay money to chop onions or peel potatoes. But one hour in the kitchen for me is like a week of vacation. I shut myself off from everything, distract myself from daily life and feel happy.”

People like Gusev are becoming more and more common in Russia. Wealthy Russians are increasingly taking up ladles and saucepans as they broaden their culinary horizons.

Back in the 1990s, dinner at an expensive restaurant or an abundance of exuberant gourmet food on the table was seen as a symbol of financial success and social status. Today, Russians are interested in culinary trends themselves.

“Some five years ago, wealthy Russians dining out were guided by one desire—to spend as much as possible,” said Pierre Gagnaire, a famous French chef who owns restaurants bearing his name in Paris, London, Tokyo, Moscow and other cities. “Today, judging from the clients at my Moscow restaurant Les menus par Pierre Gagnaire, Russians still haven’t learned how to understand food, but they are actively interested in the combination of food and wines as well as the recipes, design and origin of certain foods.”

Interest in such food has prompted restaurateurs to expand the variety of ways people can develop their tastes and learn more about what they eat. These efforts have included tastings of food from different parts of the world, tours by foreign chefs, workshops on cooking national dishes and culinary courses.

“When I opened my first Italian restaurant in Moscow 10 years ago, our clients weren’t familiar with basic Italian foods, such as Parmigiano-Reggiano, prosciutto or balsamic vinegar,” said restaurateur Gayane Breiova. “Therefore, we held workshops at the La Scaletta osteria and eventually launched Italian cuisine courses. A year ago, we started children’s culinary courses. We are completely booked on the weekends.”

Some restaurants working inside hotels have taken things a step further. Baltschug Restaurant, inside the five-star Baltschug Kempinski Hotel in Moscow, recently introduced a new service: Guests can now visit the Dorogomilovsky market, one of the best food markets in Moscow, accompanied by a chef.

“The restaurant’s chef, Elmar Basziszta, teaches our guests how to distinguish the qualities of the original product and compile a menu depending on the existing product variety,” said Nico Giovanoli, the director of the hotel’s public catering service. “They then prepare dinner from the groceries they bought after returning to the hotel.”

Preparing desserts with a pastry chef is another in-demand service among this restaurant’s regular clients. There are always people wanting to decorate and bake Tula gingerbread, a traditional Russian delicacy.

Another fashionable trend is centering teambuilding events around food preparation. “Lately, many companies have been interested in gastronomic restaurants, even though only recently sporting events such as paintball were primarily used for teambuilding,” said Vadim Palazhchenko, the chef at the deluxe Lotte Hotel Moscow. “People are interested in a format that brings the staff together and enables people to create new knowledge and experience while at the same time having dinner cooked by a famous chef at a fancy restaurant.”

The latest trend features a food market with premium groceries, a high level of service and a restaurant where people can cook the food they purchased and receive recommendations from a professional chef. One of the most interesting projects of this kind opened in Moscow in mid-December 2010. The seven-floor Tsvetnoy Central Market was set up in the style of London’s Liberty and Harvey Nichols department stores. Although all the facilities have not opened yet, eventually, the top three floors will house the Farmer Bazaar farmer’s market, restaurants, a café and a bar, managed by the restaurant operator Ginza Project. The market offers beef raised in the Moscow suburbs, milk from Ryazan, cottage cheese from Lipetsk, eggs from local villages, potatoes from Tambov, honey from Altai, tomatoes from Uzbekistan, geese from Kashir as well as vegetables, fruits, seafood, spices and artisanal delicacies from around the world.

“All the food can be prepared and sampled here in the restaurant. This is a free service,” said Boris Yaroslavtsev, the General Director of Farmer Bazaar. “We have ingredients for different culinary tastes and the clients receive help in the restaurant from chefs who cook the most popular national cuisines – Italian, French, Japanese and, of course, Russian – and have all the necessary equipment.”

Tsvetnoy Central Market’s management has the extremely ambitious goal of becoming the most appealing destination for Moscow shoppers. Considering that the prices here are very low, the store doesn’t have any direct competitors. Many market observers, however, believe the low prices are only an advertising gimmick and that the store will be unable to keep them at such a low level in the long-term.

The fact that major restaurants and other companies are expanding on existing supply while lowering the cost of their products and services indicates that positive trends are taking hold. This means that high-quality groceries and gastronomic art could soon become accessible to most Russians and not just affluent foodies.