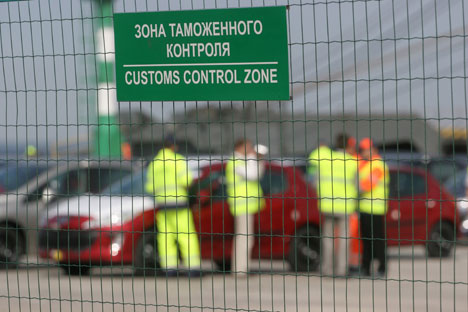 The EU wants to remove Russia from its list of countries that deserve special treatment, but agreement among the 26 countries involved could be difficult.

Russia is no longer an emerging market. That’s according to the cash-strapped European Union, which wants to get rid of the preferential trade terms implemented in the 1990s to support Russia’s transformation into a free-market economy.

The proposal is the most concrete example yet that the world economic order is changing as the leading emerging markets begin to mature.
The European Union's executive has announced plans to exclude middle-income countries such as Russia and Brazil from special rates according to the EU’s General System of Preferences (GSP). The decision to cut benefits is viewed as the most significant revamp of the trade system since the preferential scheme was first introduced in1971.

“Global economic balances have shifted tremendously,” EU Trade Commissioner Karel De Gucht told reporters. “If we grant tariff preferences in this competitive environment, those countries most in need must reap the most benefits.”

Currently 176 countries are entitled to the special tariffs that together account for 4 percent of total trade turnover. Under the proposals, the E.U. will cut about 80 countries from the list.

“Trade preferences do not make much sense anymore for relatively well-off countries such as Russia, Malaysia, Saudi Arabia or Qatar,” DeGucht said.

But the proposal might face challenges as it goes through negotiation with 26 other commissioners; at least 10 commissioners have already expressed their opposition to the proposal, which must be approved by the European Council and European Parliament.

Yet the proposal is the most explicit acknowledgement by the EU of Russia’s rising economic power on the Continent. The EU is by far Russia’s biggest trade partner and trade volumes have grown quickly over the last decade. The EU accounted for 49.5 percent of Russia’s trade turnover in 2010 after the total volume of business increased more than four-fold from $66.3 billion in 2000 to $298.8 billion in 2010, according to investment firm Renaissance Capital.

Despite the hype surrounding the BRICS countries, they do ver ylittle trade among themselves: Russia’s trade turnover with the Commonwealth of Independent States (CIS) was 13.7 percent of its total in 2010 ($82.4 billion); 12.6 percent was with Asia ($120 billion);9.6 percent with China ($58 billion); and just 3.8 percent with the United States ($22.7 billion).

A final list of countries that are to be excluded from the GSP has not yet been set, and the commission said it would like the new rules to be in place by January 1, 2014. The countries they eliminate will be offered the opportunity to secure alternative concessions by signing free-trade deals, EU officials said.

However, while Ukraine is lobbying hard for a free-trade agreementwith the EU, Russia is primarily focused on building its own free-trade economic union with Kazakhstan and Belarus. The Kremlin is showing renewed interest in joining the World Trade Organization (WTO) and hopes to accede to this global trade club by the end of this year.

Under the new EU scheme proposed by De Gucht, countries "not classified by the World Bank as high-income or upper-middle income countries during three consecutive years" can enjoy the GSP benefits.

Russia’s per capita income has increased nearly ten-fold over the last decade to $15,900 at the end of 2010, according to the CIA Factbook,making Russia a “developed middle-income country” according to themost recent United Nations Human Development Index report.
Western European companies have responded to the spike indisposable income by flocking to Russia and capitalizing on the fast-growing and increasingly wealthy consumer market.

Russia’s TV ad spending is expected to become the biggest in Europe and in the top ten globally as soon as 2013, according to media experts. Likewise Russia is so far on task to become the largest car market in Europe in the next five years.

The German-Russian trade turnover was up by just under a third in 2010 to $56 billion dollars – about as much as Russia’s entire foreign trade turnover a decade and half ago.

Even if the EU proposal is implemented, it will have only a moderate impact on Russia’s external trade. Russia’s exports are largely driven by natural resources, including oil, which rose 22 percent in the firs tquarter of this year to $112.8 billion; this was due to higher-than-expected oil prices and unrest in the Middle East and Northern Africa. However, as the economy starts to recover, the value of Russia’s imports, mostly manufactured products and retail goods, soared to$60.2 billion, twice their level a year earlier.