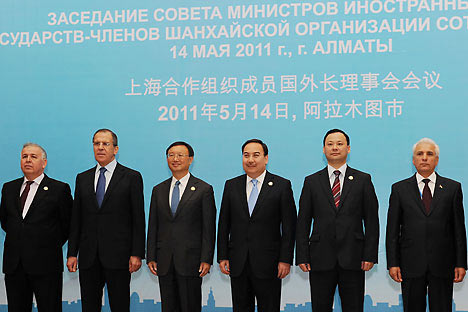 On May 14, in the Kazakh city of Alma Ata, the Foreign Ministers of the country members of the Shanghai Cooperation Organization (SCO) discussed the prospects of admitting new members to the organization as well as the agenda of the coming SCO summit.
SCO includes Russia, Kazakhstan, China, Kyrgyzstan, Uzbekistan, Tajikistan. Pakistan, Iran, India and Mongolia are participating in it as observers, while Belarus and Sri-Lanka have received the status on partners in dialogue.

Until recently the Shanghai Cooperation Organization (SCO) did not have any criteria for the admission of new members. But last year, when it came to Iran’s entry, it was decided that no state against which the UN Security Council imposed sanctions, could be a member of the organization. The SCO made it clear to Teheran that it cannot count on the membership in the organization before it resolves the problems linked with its nuclear program. Teheran seemed to understand the hint. On the eve of the current meeting in Alma-Ata Iran stated that it was ready to resume the dialogue on its nuclear problem and even hold a new round of talks. So far Teheran has failed to convince the global community that its intentions are serious. Anyway, if the UN sanctions against Iran are suspended or removed there won’t be any obstacles to consider its request for entering the SCO, Russia’s Foreign Minister Sergey Lavrov said.

"The expansion of the Shanghai Cooperation Organization (SCO) is relevant and reflects the interest of many countries to this institution. There are countries, which would like to become members of SCO. There are also countries, which want to join the organization both as observers and partners in dialogue.  All these requests are being considered. On June 15, in Astana the presidents of SCO countries will discuss the document which sets the criteria for the admission of new members to the organization. At this current session Foreign Ministers will consider it and recommend it to the heads of the states for approval."

India and Pakistan are regarded as the favorites for joining the SCO. The South drug-trafficking route lies through these countries and their membership in SCO would help to strengthen the fight against the drug threat.

At the SCO summit in summer the leaders of the countries members are to approve the Anti-Drug strategy till 2016. They will also sign a memorandum which sets the commitments for the countries, which apply for the SCO entry. This document will finalize the formation of SCO legislative base.

The Foreign Ministers of SCO countries are also preparing “the Astana declaration of SCO’s 10th anniversary”. This document evaluates the efficiency of the organization’s efforts over the first 10 years and reflects its approach to the pressing international and regional issues.

Speaking at the ministerial session on May 13, the Kazakh president Nursultan Nazarbayev has expressed confidence that the 10th anniversary of SCO will be marked by the development of new plans, stronger economic, humanitarian and security cooperation.