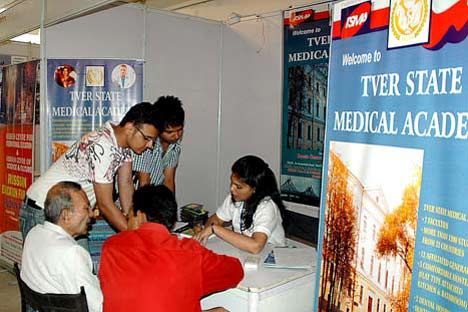 “The Russian Education Fair – 2011” was opened at the Russian Centre of Science and Culture (RSCS) in New Delhi on May 12. The delegation will also visit other major cities of the country.

Impressed with the tremendous response shown by Indian students, the head of the Russian Delegation, Prof. Mikhail N. Kalinkin, Rector of the Tver State Medical Academy and President of Association of Russian University Working in India, observed that the present Exhibition is significant in the sense that it is well timed, first and foremost, with Yuri Gagarin’s Flight into Outer Space. He continued by saying that the bilateral relation in this regard has a long history, carrying with it excellent reputation and good prospects. This year, over 800 Indian students are undergoing higher studies in Russian universities. Significantly enough, the government is supporting a number of leading universities to pursue research and open new faculties. Against this background, the aspiring Indian students can make use of the opportunities to pursue higher educational studies fulfilling their ambitions. Almost 80 per cent of students opt for medical studies, but adequate encouragement and incentives are provided to students to go ahead with engineering courses and technical education.

The government is considering the provision for funds to technical education in various Russian higher institutions. This is largely a wonderful opportunity offered to Indian students to pursue higher studies in Russian universities with relatively less cost in comparison to western universities, Prof. Kalinkin noted.

The fair will be organized in Chennai, Kolkata, Mumbai, Ahmedabad, Jaipur, Surat, Lucknow and Chandigarh as well. Free counseling and spot admission will also be provided for aspiring students to enable them to get admission to the recognized medical, engineering or other universities in Russia. Few scholarship seats are also available. As for as the standard of higher education in Russia it is considered to be one of the most advanced and high in the world, facilitated by faculties of the universities comprising highly qualified scientists and professors.

The cost of higher education in Russia is much cheaper than that in the countries such as the US, the UK, etc. Russian as well as English medium of instructions are available there. Russian education system is well-known, welcome and accepted throughout the world for its elaborate and unique features and duly recognized by the UN authorities as well as the Medical Councils of the lading world countries. Russian Medical Universities are some of the best ones. UNESCO and the WHO have always rated the Russian medical universities at a high level. Out of the first best-rated medical universities in the worlds, about 30 are from Russia.