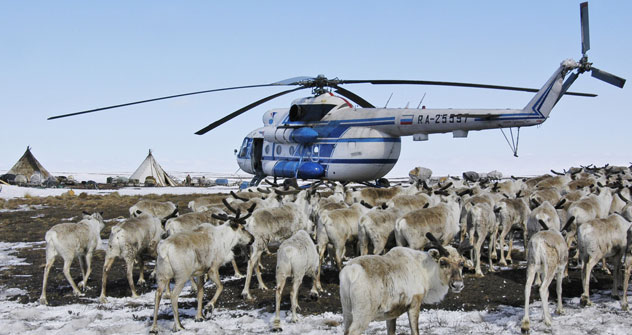 Nenets families lead a nomadic existence, following reindeer around the Yamal tundra, just as their ancestors have done for centuries. The state has pledged to protect the culture of the Yamal people at any cost, and this involves providing the Yamal people with some modern conveniences – like air ambulances to bring doctors to the remote area or rush the injured to distant hospitals.

A helicopter soars over the smooth, empty tundra. From time to time, the old, Soviet-era engine rattles like a bucket of nails. Dr. Ivanov takes a navigating device out of his pocket, then a map. He has to figure out the location of the nomad camp where he has been called to examine a young child who has caught cold. On the ground, two large dots and numerous small ones appear out of the blue. As the helicopter gets closer, the dots turn into tents, reindeer and sleighs. It is as if a picture of a Native American settlement has been bought to life.

The craft neatly touches down on the snow. It lands on a bare patch, where the snow has not piled up as much as it has elsewhere. Like all ambulance drivers, the helicopter pilots are truly amazing.

The worldly possessions of the families here consist of a herd of 300 reindeer, a small refrigerator for storing reindeer meat—literally a storage chest on skis—and a cart for firewood.  When this is loaded with fuel for campfires, the Nenets have to take it with them wherever they go: For miles in all directions there is nothing but snow—not a single tree, not so much as a bush.

Irina, the air ambulance paramedic, greets the hosts, throws back the tent curtains, and squeezes herself in sideways. The interior of the tent is just like the ones in photographs in anthropological journals: There is a collapsible floor made of wood, a metal stove with a long chimney, and in a bowl on the side, there is a traditional Yamal delicacy, stroganina (sliced fish). Quilts are laid out around the inner perimeter of the tent. Irina expertly examines the child and gives him an injection. She does this in almost complete darkness.

It is decided that the child will be taken to hospital because he has a fever. It is not serious, but it is better to err on the side of caution. His mother will go with him. She is wearing a thick yagushka, a Yamal fur coat. There are multi-colored shreds of ribbon sewn on to the back. They look like decorations, but they are actually there to ward off evil spirits—they usually attack from behind.

At last the helicopter takes off. The Nenets mother does not engage in conversation. She does not want to answer any questions. She hardly pays any attention to the child on the stretcher.

She may have a valid reason for distrusting the doctors. It is traditional for Yamal women to give birth to many children: the average is between five and seven. Usually, Yamal women do not go to hospital until the very last minute, and then after giving birth they hurry back to the tundra, where they have other children and a household waiting for them. Out of concern for the mother and her new baby, doctors have devised a strategy to discharge women from maternity unit to a regional hospital rather than discharge them completely. The doctors try to keep the women in the hospital until the baby is at least a month old.

It costs around 80,000 rubles ($2,900) to keep the helicopter in the air for one hour. In this case, it took nearly three hours to transport the Nenets child with suspected bronchitis to the hospital.

Maintaining the traditional way of life for minority populations in Northern Russia is costing the state a lot of money, and those living in other parts of the country resent the way the authorities seem to romanticize life in the tundra and create a culture of dependency among indigenous peoples.

Dr. Ivanov gives an example to illustrate this: “There was one time when we were called out to a settlement called Payuta to pick up a guide who could help us locate a tent where a woman was giving birth. We fly over, and before you know it there are four guides! And each one has a jerry can of sunflower oil, two boxes of tinned meat, and a sack of pasta. The helicopter pilot is ready to tell them to get off because it makes the helicopter too heavy, and they say: ‘You can’t do that, we are indigenous people, we are a minority population.’”

“In the end, we collect the mother-to-be, and we fly her over to the maternity unit at Salekhard. But she makes a fuss. She wants to go to Aksarka. She starts shouting at us, saying that she is going to complain to the chairman of the Legislative Assembly of YaNAO (Yamalo-Nenets Autonomous Okrug). We tell her that the air ambulance is not a taxi, and we advise her to write to UNESCO straight away. In the end, we take her to the maternity unit, but she refuses be hospitalized and walks off. Ten days later we get another call to go to the same place. The same thing happens. And then it happens again.”

“I’ll admit that what I am saying is somewhat subversive,” Dr. Ivanov said, “but this whole thing is not getting us anywhere. There is no future for this traditional way of life. I understand that Nenets people have their own particular mentality. But just imagine what would happen if we, the general public, also wore bast shoes, and grew beards like besoms. What kind of state would the country be in then? “

However, defenders of human rights feel differently.  The Finno-Ugric people, from whom all northern nationalities are descended, have a strong international lobby. If anything happens, inspectors are immediately sent in. They once came to the Komi Republic to monitor the situation and found discrimination and violations of human rights wherever they looked.

Maybe there really is an argument for changing the state’s policy on these indigenous nations. In recent years, the number of injuries sustained by native people at home and at work has decreased, as has the number of suicides.  Doctors think the reason for this is that there is less counterfeit vodka around. Now there are also more things to do besides getting drunk. For example, there is the Internet. Several settlements even have Wi-Fi.  New technology is replacing  alcohol-induced torpor, “Counter-Strike” is winning out over vodka. This is a new addition to the traditional customs of the Wild North. Is this the way of the future?