Politics or business? Why is Kremlin now eying Turkmenistan pipeline? 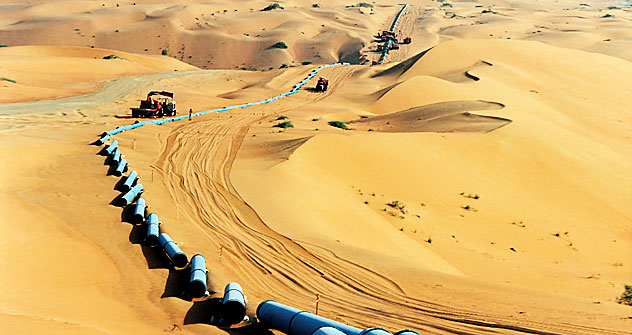 Not too long ago, Moscow fiercely opposed TAPI pipeline that sought to bring Turkmen gas via Afghanistan to Pakistan and India. But shifting geopolitics and changing business agenda is driving Russia back to TAPI.

The Soviet project for the Trans-Afghanistan Pipeline from Turkmenistan through Afghanistan and Pakistan to India (TAPI) was resuscitated by the US in the mid-1990s. Moscow has since steadfastly opposed TAPI, while supporting an alternative gas transit route from Iran through Pakistan to India. Russia’s stance towards TAPI has, however, changed since autumn last year and it is now ready to take part in the project. The $7.6 bn pipeline will have a throughput of 33 bn cubic metres a year. Out of this, India’s share will be 18.

Russian President Dmitry Medvedev has already discussed the project with leaders of all four participating countries. Early this year, he secured support from Afghan President Hamid Karzai. This has resulted in a joint Russian-Afghan intergovernmental commission, co-headed by Energy Minister Sergei Shmatko on the Russian side. India, Russia’s main partner in Asia, has nothing against Gazprom participating in the project, say highly-placed sources. The president of Pakistan, who was received in Moscow several days after Osama bin Laden was killed in his country, also supports the idea.

Only Turkmenistan is strongly opposed to Gazprom’s participation in TAPI. In October last year, when Medvedev visited Turkmenbashi, Russia submitted its proposals concerning potential roles for Gazprom in the Trans-Afghanistan Pipeline consortium. It could take part in development, become the project designer, and invest in the project’s equity, as well as produce natural gas at Turkmenistan’s inland deposits and sell it to other participating countries. Turkmenistan, which is striving to enter the European and Asian markets bypassing Russia, has blocked Moscow’s initiative.

Gazprom has reiterated its interest in the project but the TAPI founding parties have not invited it to join, says the gas giant’s spokesman Sergei Kupriyanov. The TAPI participant countries held a meeting in New Delhi in late April to discuss technical and financial issues. No Russian representatives were, however, invited. At the same time, the issue of Turkmenistan’s resource base is far from clear, notes Alexander Pasechnik, Head of Analysis of Russia’s National Energy Security Fund. They have made promises for too many new projects, including TAPI and the Nabucco pipeline to Europe. That is why the project’s participants are insisting on an audit of Turkmenistan’s gas reserves. Should they be dissatisfied with the results, Gazprom’s chances of joining the project will brighten.

Gazprom, on its part, does not like to bury its cash in the ground on explosive routes, while 830 km of the new pipeline will go through the Afghan territory and another 400 km through Pakistan. Plus, gas supplies to India via third parties are rather attractive for the Russian monopoly. “From our standpoint, TAPI and Mir are not mutually conflicting. In both projects, it is not so much the end market that is important to Gazprom as the possibility of diverting Iranian and Turkmen gas from Europe,” says a source at the company.

Pasechnik points out that it has been primarily politics that have forced Russia to reconsider its stance on TAPI. “Although, on paper, the relations between Moscow and Washington have thawed, we are still in an ideological stand-off,” he says. Moreover, security concerns are central to the Trans-Afghanistan Pipeline. This could entail preservation of NATO’s influence in the region. A couple of years ago, Jaap de Hoop Scheffer, then NATO Secretary General, said: “NATO is not in the business of protecting pipelines. But when there’s a crisis, or if a certain nation asks for assistance, NATO could, I think, be instrumental in protecting pipelines on land.” This is a good reason to forget about the American president’s campaign promise to pull out of Afghanistan in the foreseeable future. Russia, on the other hand, is promoting its Shanghai Cooperation Organisation, which stands for stability in the region, and is enticing the TAPI participants to join it. Both and Pakistan are observers at the SCO and are now understood to be keen on becoming full-fledged members.