A game for four hands 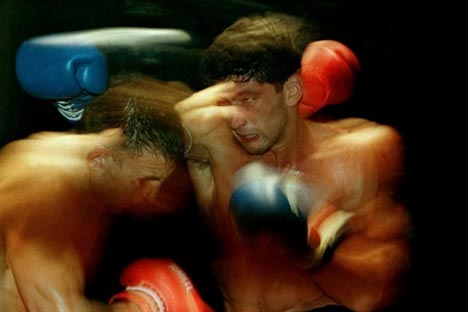 Sports photographers Andrei Golovanov and Sergei Kivrin talk about their profession and how it has changed with technology.

All photos by Andrei Golovanov and Sergei Kivrin

Andrei Golovanov and Sergei Kivrin have been working together for a quarter of a century. During this time, they have joined the ranks of Russia’s most famous sports photographers. They have more than 10 Olympic Games under their belt as well a numerous world championships and other competitions that they have documented using the language of photography.

“What sets our photographs apart is the fact that we pay a lot of attention to the background. It should not distract or interfere with the main action of the shot,” said Sergei Kivrin. “We had very good training; we were taught by the old Soviet masters who took photographs back in the Second World War. Now, sports photography is on the brink of extinction, as the emphasis is on speed, rather than content. This ultimately leads to photographers taking on the role of cameramen during tournaments. Many agencies already work like this. They have their own channel, it is linked to the cameras, a picture editor sits in an office and all the photographers’ shots come through to them, they then select the photographs and post them on the Internet. In this way the pictures reach the public much quicker, but it hardly benefits photography as an art.”

While Andrei Golovanov shares his co-author’s opinion when it comes to questions about their profession, work is perhaps the only area in which their views coincide. They even relate differently to the sports heroes who are the subject of their work. Golovanov empathizes with the athletes:

“At the Athens Olympics, I was ready to whistle and protest with the spectators, when Alexei Nemov was given his score,” Golovanov said.

Kivrin, however, tries to remain detached from what he sees in the camera lens:

“When you are taking photographs, you do not have the right to take sides. If you give in to emotions, then they will stay inside you and they won’t be transferred onto the image.”

Their ability to provide two points of view on a single event has given Kivrin and Golovanov a lively and varied portfolio. Perhaps it is their differences in character and viewpoint that has led to this photo-tandem’s popularity among viewers and colleagues as well as their many prizes.

“I first got into sports photography back in the Soviet Union. We never even dreamed about freedom at this time, and sport was the only part of life where you could tell the truth,” said Kivrin. “Apart from this, sports photography, in my view, is not all that different from other branches of photography. You just have to understand the subject of your photographs. For example, in volleyball: there is a serve, a return, a smash, or a player might kiss the ball, pat it, then throw it in the air, take a run up, raise his arms. These are all the objects of photographic scrutiny. There’s a lot of good material here. But it is essential to have good reactions. If you have been photographing still lifes throughout your career, then a football match is not going to be easy.”

Kivrin and Golovanov, both natives of Moscow, have been working together since 1985. They have taken photographs for numerous publications, including Prosport, The Los Angeles Times, Newsweek, Ogonek, Cosmopolitan and Burda, as well as for agencies such as The Associated Press, Reuters and AFP.

Despite, or perhaps because of, their experience in the field of sports photography, they fear for its future.

“Photography has ceased to be an art,” said Kivrin. “The combination of cameras and the Internet allow people to post pictures on Facebook and Twitter, and this is no more than transmitting a signal. A day later, no one will remember how the photograph looked. Armed with a camera, everyone has suddenly turned into a professional. But we, on the other hand, with our wealth of experience, are quite nervous as we go off to a shoot. We try to shoot something new, something original.”