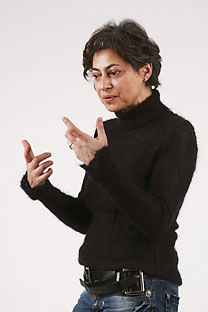 A journalist might expect problems getting a visa to China, for example, but to the United States?

Not long ago, I had an interesting conversation with a man who works at the U.S Consulate in Moscow.

I had been invited to participate in a conference to mark World Press Freedom Day. This year, the event was organized by an American foundation in conjunction with UNESCO, and was scheduled to take place in Washington at the beginning of May. The title of the conference was: 21st Century Media: New Frontiers, New Barriers.

After filling in the electronic form exactly as instructed on the website, I set off for the Consulate. I paid the $140 fee and waited for desk to open. I was first in line. The consular officer appeared on the other side of the window.  He looked at the invitation, my other papers and my passport, he checked it on the computer and took my fingerprints. Then he thought for a moment and said:

“So you’re a journalist?”

“And you’re going to America, and you might decide to write something?”

I really could not understand what he was getting at—was it a good thing that I might write something, or the reverse? Is there something wrong with the fact that a journalist might decide to write about what they see? So I asked:

“Yes, but you’re a journalist. And I can’t give you a one-year or a two-year visa. You will get a three-month single-entry visa.”

“Are you sure that you have correctly understood the reasons for my visit?”

“Well, if you decide to go to America on vacation then, of course, I will give you a multi-entry visa, and you can go on holiday in America as often as you like.”

This argument left me speechless. According to the man behind the glass, if a journalist is going to a conference, then he or she is a journalist. If, however, the journalist is going on vacation, then he or she is not a journalist. Therefore, before going off on holiday to somewhere in Colorado, I should officially acknowledge that I will only admire the landscapes, and if, for example, I am witness to a crime, or on the other hand, if someone does something amazing in front of me, I will pretend that I am not a journalist and that I will not be tempted to get my computer out and write about it. I asked for my passport back.

If I had been a veterinarian, an architect, or a teacher, I could have gone to America on a two-year multi-entry visa. But I chose to be a journalist. Therefore I cannot be given a one-year or two-year multi-entry visa. But they will let me in once in a limited time span. It ties in very well with one of the fundamental aims of the conference I wanted to attend: “To strive to uphold and expand the freedom of the press and the free flow of information in this digital age.”

I felt like someone with a horrible disease. The way the consular official looked at my motivations for traveling was so absurd that it took me a while to realize how humiliating this conversation had been and how much I had been damaged by it.

I went to America. And when I was there, I was presented with an award, which was actually called “Freedom of Press.” I gave speeches and lectures. I will never allow this bureaucrat to change my opinion of this country and the way I think about the American attitude towards journalists and the press. But in some ways he is right. Yes, I am a journalist and I hope that in any circumstances, in any country in the world, and while I have a brain that works, I will remain a journalist. And if my punishment for this is a visa that gives me fewer opportunities than people from other professions, then I will wait until these times pass, and then I will go.

I don’t know who made the decision to give journalists more limited visas in comparison with people from other professions. I don’t know whether these limitations apply to me personally, or whether they are also something that colleagues of mine have to deal with. This decision, this barrier, is something that is worth talking and writing about. When repressive governments impose barriers on my colleagues it is appalling, but it is to be expected. But when I had to face this from someone representing arguably the most free country in the world, this was something I could not come to terms with. And I refuse to play by these rules.

Incidentally, I would much rather have donated the $140 I paid for a visa toward supporting the electoral campaign of a U.S. presidential candidate that I think would show people from my profession the same degree of respect, whether the journalist was American, Russian or Chinese—someone who would act without regard for frontiers and barriers.