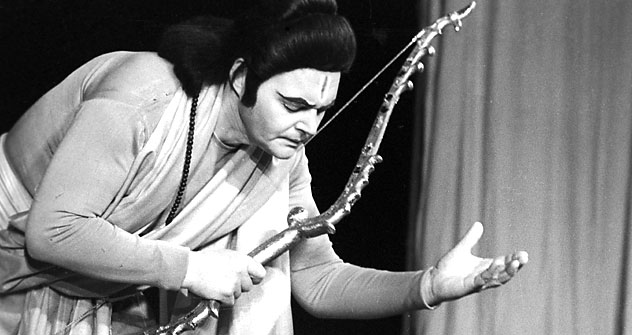 In this wide-ranging conversation, Pechnikov talks about his experiences of playing Rama and acclaim and adulation that followed, reminiscences of his visits to India and his life-long love affair with India.

Gennady Pechnikov is better known in theatre circles as the actor who played Hindu god Rama in the Russian stage adaptation of Ramayana, an immortal Indian epic, in the 1960s. Decades after the premiere of Ramayana in New Delhi, Pechnikov recalls with relish his meeting with Jawaharlal Nehru, India’s first prime minister.  “After the Ramayana premiere in India”, Pechnikov recalls warmly, “Jawaharlal Nehru came up to me, shook my hand and said: “You are our Rama.”’

“And this was the best compliment for me. Actually, Nehru was supposed to stay only for the first act but when his assistant tried to remind him about it, he brushed him off saying: “Please, for once in my life, let me do what I want.”

Looking back, Pechnikov firmly believes that playing Rama was more of karma than a role and he was predestined for this role. His home shows the deep impress Indian culture and religion has left on his mind and heart. There are statues of Rama and Sita, and Shiva on the shelves which create a very Indian ambience in the room. The most precious of them, according to Pechnikov, is the picture of Rama, Sita and Hanuman carved on the wood. “It was the gift of an Indian boy named Anand. He made it himself,” he reclls. There is also a photo of Nehru with Pechnikov and the cast of Ramayana hanging on the wall to the left from his table.

People's Artist of Russia G. Pechnikov is playing the role of Rama in the 20-th anniversary of "Ramayana" staged in the Central Children's Theater (Russian Academic Youth Theatre), May 1, 1980. Source: RIA Novosti

How did you begin working on Ramayana?

I co-directed Ramayana. It was Natalya Guseva, a reputed Indophile, who brought us the script. She thought that Ramayana must be staged at children’s theatre.

And what did it feel like when Valentin Kolesaev offered you to co-direct Ramayana and to play what many Indians worship as God? Did you feel elated, confused or probably a little bit nervous due to divine aura around that role?

My love affair with India began before the Second World War, much before I became an actor.  I read Jules Verne’s novel “Mysterious Island” when I was a young boy. There was such an amazing description there. I remember reading about those sailors who suffered a shipwreck and there was this man who helped them, this Indian prince who was a very handsome, intelligent, educated and kind man, who helped people. And the most important thing was that he participated in a rebellion, he fought for his country. There were also a lot of films and Russian painter Veretshagin’s paintings devoted to India. And it was all very impressive and inspiring, especially when you are young.

Indian poet and journalist Madanlal Madhu is a friend of yours. Did he give you any advice during your work on Ramayana?

Madan Lal Madhu is my very old and good friend. After the premiere of Ramayana, he wrote about it for the Indian media and he mentioned that in some ways we did an even better job than Indian directors, (laughs) which was good to hear. For example, remember the Ramayana scene when during the contest for the hand of beautiful Sita, only Rama can raise the bow. Indian performers playing Rama raised the bow very easily. And I suggested that my character puts much effort into picking up the bow because it shows its heaviness and emphasises Rama’s strength.

They were delighted. On the whole, I felt very encouraged by the reaction of Indians to this play because I was a little bit anxious how it would be received in India. I had a good relationship with the then Indian ambassador, K.P.S. Menon and his wife Saraswati Menon. So I asked the ambassador why Indians liked me and my performance of Rama. He is god, he is an ideal, and it is a great challenge and responsibility to perform this role. And, after all, I am a representative of a completely different culture. The ambassador laughed and explained to me: “Firstly, your figure, you are very stately, you have big eyes and round face, which makes you look the part. And, most importantly, you are very kind. Because Rama must be kind, he puts the interests of his people first.

I remember my first visit to this amazing country. It was Indira Gandhi who invited me, and it was a miracle that I was allowed to go there alone, without being accompanied by the government people. I was very stressed because I didn’t know what would be a proper gift for Indira Gandhi, and I wanted my gift for her to be special. Finally, it gave her the picture of me as Rama and also the best Russian sweets for her grandchildren.

What was her reaction?

She held the picture, took a long look at it and said: “Atchatcha!” in this very Indian way. (smiles) It was an honour for me that she spent 40 minutes talking to me whereas she had a very tight schedule and she gave every other guest only 15 minutes of her time.

I think maybe there was something Arian in me (laughs); that’s why I was so much interested in India. You know, I’ve heard that there is the continuity between India and Russia. For example, the name of the longest river in Russia is Ra which sounds similar to Rama. And Indian Vedas are similar to the Russian verb “vedat” which means “to know”. I felt close to India since my childhood. I always felt an affinity with Indian mysteriousness, wisdom, beauty and kindness.

Were there any places in India that you were particularly keen to visit?

When I came to India I said to the people receiving me that I am a guest here and I would go wherever they take me with great pleasure. But there was one place I insisted on seeing first. It is Raj Ghat, the cremation site of Mahatma Gandhi. I feel sad when I think about his assassination, he was such a dignified man. By the way, the Russian translation of Gandhi’s famous last words is not correct. In Russian, it sounded as “Hey Lord!” But it was “Hey Ram!” And that’s a great difference.

Can you tell me more about the process of working on the play?

We were immersed into Ramayana like in deep waters of the ocean. At that time I didn’t know much about Ramayana. We started to learn Indian history and epics in the process of preparing for the play. I think the difference between other religious books, such as the Bible, Koran, Torah, and Ramayana is that the main character Rama was all-too-human. Rama was a warrior, a prince. In fact, he was the leader every nation would dream of. And the Indian people created an ideal.

What do you find especially appealing in the Hindu philosophy?

The harmony. Rama is from the Sun dynasty and Sita is the daughter of the Earth. Sun, earth and heaven do not come into conflict; it is the harmony between very different powers that is so unique in Hinduism. So when Rama fights against Ravana, all the forces of nature help him. Animals represent divine incarnations, and I believe this shows the wisdom of the Indian people. Take Hanuman, for example. He is intelligent, very creative, and he impersonates spiritual forces. By the way, speaking of Hanuman… I was talking to the first Indian astronaut Rakesh Sharma. I asked him: Who is the first Indian astronaut? He said: “I am”. I said: “No, it’s not you”. And seeing the look of surprise on his face I announced: “It was Hanuman”. He laughed so much.