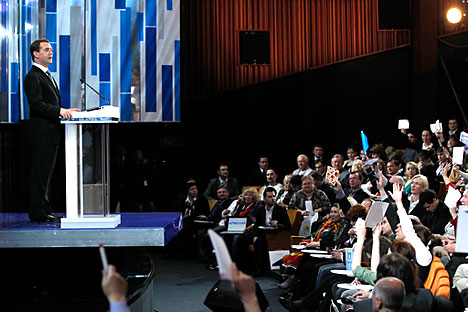 Despite expectations, President Dmitry Medvedev did not use Skolkovo as an economic platform for re-election.

In his first ever question-and-answer session on May 19, Russian President Dmitry Medvedev gave little real-time insight into how he hopes to push through his economic objectives during the remainder of his first term as president. But the president said that despite the Kremlin’s colossal efforts to modernize the country, nothing tangible has been achieved to date. President Medvedev told journalists that though his modernization program has got off to a slow start, he is drawing inspiration from the challenges. “This only pushes me and my colleagues in the government to work more actively to change life in our country,” Medvedev told more than 800 journalists at the Skolkovo School of Management outside Moscow.

Skolkovo, dubbed Russia's Silicon Valley, is at the heart of Medvedev's ambitious plans to diversify Russia's $1.5 trillion economy away from dependence on the export of natural resources by boosting the share of high-technology products. Relating his experiences during a recent visit to Singapore, Medvedev said it is still his dream to develop an iPad economy, where entrepreneurs can start and run business at the touch of a button. “This is the whole concept of our modernization efforts,” he said.

But while the country has overcome some economic challenges under his leadership, Medvedev said, more still remain to be tackled, especially in the social sphere. He said that about 13 percent of Russians still live below the poverty level, but hastened to add that in the not too distant past, 30 percent of Russians were poor. “We have not been able to diversify the economy as much as we’d love to. We could not reduce our commodity-dependence [and] we were unable to sufficiently improve the investment climate,” he said, listing possible flaws during his three-year tenure. He promised to elaborate on measures for improving the country’s investment climate at the upcoming Economic Forum in St Petersburg.

Like his mentor Prime Minister Vladimir Putin, Medvedev saw economic stability amid the tremors of the 2008 financial crisis as his major achievement in power. “During the global financial crisis and rising unemployment, we did not lose the tempo of development of the country,” Medvedev said. The president, who spent two hours and 20 minutes fielding reporters’ questions, said that unlike many other countries, Russia was able to preserve its key economic program without significant deterioration in the people’s standard of living. “We quickly recovered and started moving forward,” he said. Like Putin, Medvedev also dwelled on Russia's robust economic growth after a decade of decline. The president, who apparently found it difficult to distinguish between his and Putin’s vision for Russia, said he believed that Russia is in position to expedite actions on various developmental programs, while Putin believes that change must be gradual.

The president also commented on the failure of the BP-Rosneft deal, saying that both parties should have paid closer attention to the terms of a shareholder agreement governing BP's Russian venture that caused the strategic deal to fall apart. "Those who prepared the deal should have paid closer attention to the nuances of the shareholder agreement," Medvedev said. "It would have been necessary to conduct more careful due diligence inside the government," Medvedev added, in a discreet criticism of Deputy Prime Minister Igor Sechin, who, as Rosneft chairman, oversaw the deal. The deal between the two companies collapsed at a May 16 deadline after BP failed to win approval from its partners in TNK-BP, Russia's third-biggest oil producer, to proceed with the original alliance. The billionaire partners blocked the deal in court, arguing that TNK-BP had sole rights to pursue opportunities in Russia for BP.

Contrary to expectations, Medvedev did not use the press conference to push a pro-business agenda or appease foreign investors spooked by Russia's unpredictable legal environment. When asked about the fate of jailed oil tycoon Mikhail Khodorkovsky, Medvedev gave a curt answer that his release presents no danger whatsoever to society. He did say though that Russia will back a Swiss investigation into a money- laundering probe opened at the request of Hermitage Capital Management Ltd., the first criminal investigation outside Russia linked to the death of lawyer Sergei Magnitsky in a Moscow prison. "The investigation has made significant progress," Medvedev said, adding the circumstances and the actual causes of Magnitsky's death "will be known soon." Medvedev said Russia will back any investigative action within the bounds of the law and that "all persons involved in the crime, both in Russia and abroad, must be identified."