Saratov school teaches questioning authority along with reading and writing 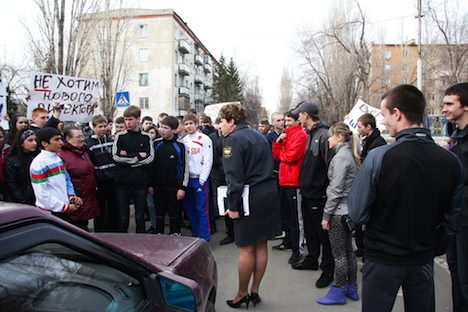 The students of School 93 in the Russian city of Saratov found themselves in the spotlight when they staged a rally and blocked traffic to protest the dismissal of their principal, Nikolai Shuster, forcing the regional education minister and governor to do some explaining.

Secondary school number 93 is surrounded by apartment blocks. One recent afternoon after classes ended, students and a few parents who managed to get off work gathered in the schoolyard. The children unfurled banners that read: “Bring back our director,” “We want Shuster,” “No Shuster, no future.” Nobody was in a hurry to go home.

Shuster, however, was not in attendance.

“They invited me, but I am afraid of provocations,” Shuster explained.

Shuster’s dismissal itself was shocking, but the way it was handled made the situation even worse. Normally, even the least desirable school principals are sacked during summer vacations, to avoid disrupting the teaching process. Shuster was fired on the eve of the Unified State Examinations, on a Friday evening, after the end of the work day.

“Some city officials came to the school; they had an executive order for my dismissal,” the former school director said. “Several hours earlier, the head of the Kirovsky District, Sergei Pilipenko, told me—wait for it—that I was being too aggressive in lobbying for the interests of my school and suggested that I resign of my own accord.”

Administration officials who asked not to be named said that Shuster had been asking for money to repair the school for its anniversary next September. More importantly, he had proposed merging two schools that stood next door to one another in order to create a major education center. After receiving no response from the local authorities, the director presented his initiatives to the Saratov Region education minister. The district administration found this insulting and decided to act.

In general, Nikolai Shuster does not appear to be a hard-driving manager. He has a gentle manner and soft, faltering speech. It is hard to imagine that he has been the head of a school for six years and one of the most popular teachers in town, much less a troublemaker.

“He saw students as individuals and not subordinates,” said one of the mothers, explaining why the students were so determined to have him reinstated as their principal. “If a child was not doing well in chemistry, Shuster did not conclude that the kid was dumb. It meant that chemistry was not his strong suit. He would think of something that would bring out the best in that pupil. That was his style. In his school, children can ask questions and demand answers.”

After the children blocked the traffic on Zhukovsky Street for half an hour, a police officer arrived on the scene.

“Introduce yourself and show your ID,” someone from the crowd demanded.

“Who are you to check my ID? Isn’t uniform enough?” the officer replied.

Instead of being subdued, the children are incensed. Somebody climbs a wall and takes a video of what is going on. The situation is slowly but surely getting out of hand.

“It was not my decision but the city mayor’s,” said the head of the district administration trying to make lame excuses. He suggested the group go inside and talk.

Somehow, he managed to end the protests by promising to look into the matter promptly and in accordance with the law.

Throughout the following week, the “children’s revolt” was the main talking point for the local media, politicians, human rights activists and education officials.

“We’ve been faced with a unique situation, when schoolchildren and their parents expressed their opinion,” regional education minister Garry Tatarkov said publicly. “We must draw the right conclusions from this, the chief one being that parents today are customers of education services and are no longer prepared to be onlookers in such situations. For my part, I would like to say that Shuster is a worthy manager who was in the right place. I, for one, see no reason for his dismissal.”

It seems that this small school in Saratov managed to teach its students not only chemistry, mathematics and Russian language, but also to question the authorities.