The amendment that came in from the Cold War 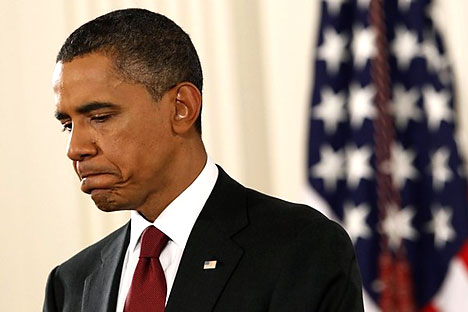 Jackson-Vanik remains on the books, but a new lawsuit argues that it does not apply to Russia at all.

U.S. President Barack Obama can feel pretty good these days: Osama bin Laden is dead; growing public opposition to GOP fiscal policies strengthens the president’s hand in dealing with congressional Republicans; the worst expectations for the natural disasters caused by the Mississippi River flooding have so far not materialized.  His re-election prospects look shinier with every passing day.

But let’s not assume that the president sleeps on a bed of roses.  Obama has problems of his own, and one of them is that he’s facing a lawsuit.  The lawsuit was filed on Apr. 18 in the U.S. District Court for the District of Columbia by two Americans: Edward Lozansky, a former Soviet dissident and currently president of American University in Moscow, and Anthony Salvia, a renowned expert on U.S.-Russia relations and formerly head of the Moscow bureau of Radio Liberty. Lozansky and Salvia are asking the court to force President Obama to use his executive power to graduate Russia from a provision of Title IV of the Trade Act of 1974, commonly known as the Jackson-Vanik amendment.

The notorious Jackson-Vanik amendment (named after its sponsors, Sen. Henry Jackson (D-WA) and Congressman Charles Vanik (D-OH)) is one of the most recognizable ghosts of the Cold War.  The Cold War is long over, but the amendment keeps haunting the house of U.S.-Russia relations.  It was adopted by the U.S. Congress in 1974 to deny the Soviet Union, a non-market economy at the time, normal trade relations with the United States as a punishment for restricting Jewish emigration from the Soviet Union. In 1994 – three years after the disintegration of the Soviet Union – then-President Bill Clinton announced that as far as the emigration was concerned, Russia was no more in violation with U.S. trade law.  Ever since, Russia has been granted normal trade relations through annual presidential waivers.  In 2002, the U.S. Department of Commerce officially recognized Russia as a market economy. Both pillars of Jackson-Vanik have collapsed.

Case closed?  Not so fast.  The U.S. Congress rejected requests from both President Clinton and President George W. Bush to graduate Russia from Jackson-Vanik and grant it normal trade relations. Congress felt it handy to keep the amendment on the books: to press Russia into buying more American poultry and meat.  (The power of U.S. “chicken lobby” must not be underestimated: 38 states, with their 76 senators, have a stake in these sales.)  Besides, lacking any real leverage in influencing Russia’s policies, U.S. lawmakers wanted to have a stick to punish Moscow’s “misbehavior:” In 2003, Sen. Charles Grassley (R-IA) explicitly linked Jackson-Vanik to Russia’s opposition to the Iraq war.

Experts disagree on the extent to which the amendment affects U.S.-Russia economic and trade relations.  Some believe that because of the annual presidential waivers, the de facto influence of the amendment is negligible and that other factors are to be blamed for the poor state of these relations.  Others argue, as does Lozansky in his court filings, that the very need for an annual presidential review—potentially subject to congressional interference—creates an air of uncertainty that is damaging the long-term prospects of the bilateral economic cooperation.

Yet everyone seems to agree that Jackson-Vanik remains a powerful irritant for the whole body of U.S.-Russia relations, especially on the Russian side, with Moscow loudly arguing that the annual review process is discriminatory and humiliating.  Even in the United States, there are not many fans of Jackson-Vanik outside Congress.  Some Jewish organizations, for example, have repeatedly expressed their uneasiness with the fact that the amendment, which they consider a landmark accomplishment in the area of human rights, is being used to sell more American chickens.

On a number of occasions, the Obama administration, too, promised to get rid of Jackson-Vanik.  The latest such promise came from Vice President Joe Biden—incidentally, an active supporter of the amendment in the past—during a spring visit to Moscow.  The consensus, however, has been that the problem lies in Congress: With the Republican majority in the House of Representatives, there is virtually no chance that the amendment would be repealed before Russia joins the World Trade Organization.  The situation seemed completely at a stalemate.

The potential solution came, as they say, from a place no one expected.  Addressing the World Russia Forum in Washington, DC in April, Richard Perle—an assistant secretary of defense in the Reagan administration and not a friend of Russia, to say the very least—dropped a bombshell.  He claimed that Jackson-Vanik didn’t apply to Russia anymore.  Perle knew what he was talking about: As the top advisor to Sen. Jackson, Perle wrote the amendment.  Perle pointed out that contrary to popular belief, the amendment, as originally drafted in 1974, didn’t mention Soviet Jews or the Soviet Union itself (to say nothing about Russia).  All it said was that the normal trade relations with the United States must be denied to non-market economies that restrict emigration.  Because now Russia is market economy and imposes no restriction on emigration the amendment is null and void as far as Russia is concerned.  In Perle’s opinion, President Obama doesn’t even need go to Congress; all he has to do is to issue a corresponding executive order.

The lawsuit that Lozansky and Salvia filed less than three weeks after Perle’s surprising revelation put this idea into legal motion.

Lozansky is quick to add, with a smile, that this lawsuit is a “friendly” one.  Its real purpose is not to “punish” President Obama, but, rather, give him a helping hand.  Obama can now use the cover of the lawsuit to graduate Russia from Jackson-Vanik without spending his preciously limited political capital on squabbling with Congress.  And the more parties—businesses, non-profit organizations and private individuals—that join the lawsuit, the more likely its positive outcome.

There is one aspect of the Lozansky-Salvia lawsuit that must not go unnoticed.  It is perhaps for the first time that two private individuals—that is, people not working for U.S. government or belonging to established public organizations—have undertaken steps towards bettering U.S.-Russia relations.  Should their lawsuit succeed, it may well signal that the much talked about, yet still non-existing, pro-Russian lobby in the United States has finally emerged.