Earning money for meals on wheels 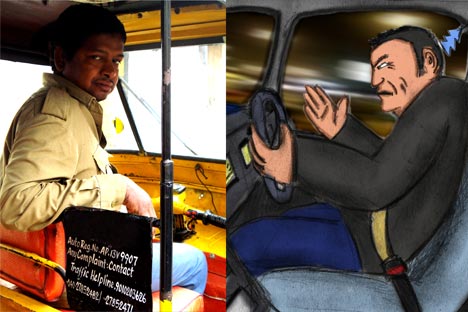 Russia and India are very different countries in every which way: territory, climate, population, religion and popular culture… And yet, are these differences really so important for people of the same profession? We are continuing our series of “Double Portraits” to investigate, and here are the next two characters: Shekar – an auto rickshaw driver – and Pasha – a so-called «bobmila»; both of them are a cheaper alternative to taxis.

Before the marrige Shekar's passion to travel has taken him to different parts of the country like Srisailam, Bider, Nanded, Tirupati and Kerala. He hesitantly admits that once his responsibilities increased his explorations have reduced. The young hidden Shekar comes out for a split second when he sheepishly admits that his only indulgence is a small drink otherwise its just the TV or watching a movie with his daughter and wife. With hope in his eyes he immediately shares that he would soon want to go for a pilgrimage to visit the Golden Temple and the Vaishnavi Devi Mandir.

Yes, of course. There are five of us: myself, my wife and three kids. The oldest is 24 and the youngest is 9. I like to go to the country with my family. I like being invited by friends to visit their dachas with their families. We sit and eat barbecues, relax, drink wine and talk in the fresh air… That’s how I spend my free time. I don’t like going to night clubs: I am past the age and my finances wouldn’t allow me to. In general I think it’s a waste of time.

Are you satisfied with your life? Do you see it in a better way?