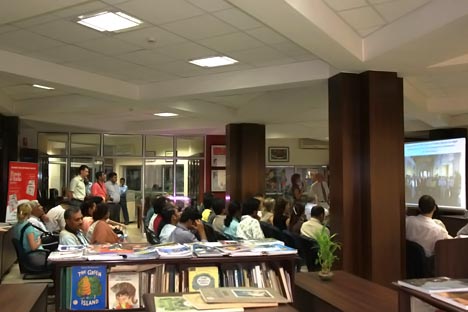 Students looking on the screen during the presentation in RCSC, New Delhi.

A Centre of Public Access to Russian Legal Information was opened at the Russian Centre of Science and Culture (RCSC), New Delhi.

Mr. Vyacheslav Yudin, Deputy Head of a Department, Federal Information and Communication Services (FICS), Russian Federation, who led a three-member Russian delegation, together with Mr. Fyodor A. Rozovskiy, Director, RCSC, inaugurated the Centre. Mr. Vyacheslav Yudin later handed over the computer software and CDs to Mr. Fydor A. Rozovskiy for the requirements of similar Centres to be opened in the near future in Kolkata, Mumbai, Chennai and Thiruvananthapuram.

Addressing an elite gathering at the inaugural function, Mr. Fyodor A. Rozovskiy, Director, RCSC, said that it is for the first time-ever that a centre of this sort is being set up in India. Underlining the importance of the centre, he noted that the legal information on Russian Federation, which hitherto implied difficult proceeding, is now the click of a mouse away for anyone who requires it. Basically instrumental to Russian compatriots in Delhi, the Centre facilitates professionals such as scientists, lawyers, teachers, students, business-men and even common citizens providing easy access to Russian legal information, Mr. Rozovskiy added.

Dwelling at length upon the special features, objective and functioning of the Centre of Public Access to Russian Legal Information, through a multi-media presentation, Mr. Vyacheslav Yudin said that the Federal Information and Communication Service activity in legal information dissemination came into being under the Presidential Decree N. 1013. He further said that the principal task of the Service is State regulation and support to legal information dissemination within the Russian Federation. Is powers mainly consist of providing legal information to the President of the Russian Federation, the Prime Minister of the Russian Federation, President Plenipotentiaries in Federal Districts and other governmental bodies, as also compiling the Integral Data Bank of Legal Information, providing access to the Bank for citizens, Federal and Regional authorities, Institutions of Local Government., Mr. Vyacheslav Yudin said.