“Who knows where I will be soon” 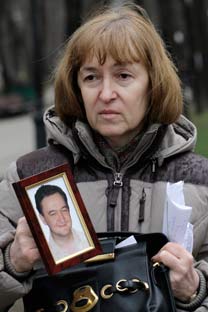 President Medvedev’s advisers speak to Russia Now about the case of Sergei Magnitsky.

The metal cage used for prisoners in courtroom No. 14 at the Tverskoi regional court was empty during a recent hearing, its door wide open. Moscow spring sunshine streamed through windows, their metal bars pushed aside.

There was no need for locks two weeks ago when the court considered the arrest of Ivan Cherkasov, a senior executive at British investment fund Hermitage Capital. Cherkasov lives in London and has no intention of returning to face the charges of tax evasion he says are false. He says his arrest is a counter attack by rogue forces in the Russian security services.

In a bold and surprising move just days before, an independent commission set up by President Dmitry Medvedev said that the charges in the case of Russian lawyer Sergei Magnitsky were fabricated by Interior Ministry officials and that Interior Ministry and FSB security service officers were at least partly responsible for Magnitsky’s death in 2009.

Magnitsky died after 11 months in pre-trial detention and after repeated requests for medical treatment.

The findings of the presidential commission are in a preliminary report that was leaked to Russian newspaper Vedomosti and then confirmed by commission members.

Magnitsky was working for the Hermitage Capital when he uncovered what he claimed was a $230 million tax refund scam set up by a group of corrupt police and tax officials.

“When Sergei Magnitsky testified against the police officers, the same police officers put him in pretrial detention, tortured and killed him,” said William Browder, CEO of Hermitage Capital, in a telephone interview from London.

Magnitsky’s death became an international cause célèbre, and Medvedev has staked much on investigating the case.

“Medvedev has taken the Magnitsky case under his personal control,” said Alexei Mukhin, a prominent Russian political analyst. “If the authorities do not react to such things, then people will not vote in the elections and foreign investors will be reluctant to invest.”

People involved in the commission say that there is a battle going on behind the scenes to temper the results.

Kirill Kabanov, head of the National Anti-Corruption Committee, is working on a separate part of the report. He says pressure has been relentless.

“There are several officials well-known in politics who have stated openly that they don’t give a damn about our investigation,” said Kabanov. “This is wild, brutish arrogance. They aren’t puppets, they are players. And the [security service] isn’t prepared to surrender its employees, partially for the fact that they know a lot and could tell people. In addition, there is huge money at stake.”

The final report is set to come out at the end of May, beginning of June, Kabanov said.

Medvedev has made fighting corruption the centerpiece of his presidency, but critics say there have been few concrete results.

Officials from the Butyrka jail, where Magnitsky was denied medical help, were fired. But there have been no arrests or direct police investigation of the officials accused of corruption.

Hermitage Capital was once one of the most enthusiastic of Kremlin cheerleaders. Since its head, William Browder, was refused entry to Russia in 2005, it has been a strident critic.

Hermitage Capital has spent an enormous amount of time and money on its own investigation of the officials involved in the alleged tax fraud. A series of videos have been released detailing the case, most notably documenting lavish purchases made by the officials in the year after the tax scam took place.

The refund, normally a complicated process, took only one day, according to Hermitage. The most recent video created by the company accused a tax official who approved the tax refund of wiring millions into a Swiss bank account opened in her husband’s name. It also chronicles the purchases of luxury property in Dubai and Montenegro as well as a Moscow country house the size of an airplane hangar, valued at more than $20 million.

The purchases were made even though the official and her husband, the video reported, have an annual salary of only $38,000.

Swiss authorities froze the bank account of the official’s husband after a complaint from Hermitage Capital. Russia has not made any similar moves yet.

The leaking of the report has unnerved the people involved, and Kabanov and others see the hearing against Cherkasov as a counterattack. Cherkasov himself has called it revenge.

At the end of the recent hearing, the court backed investigator Lieut. Col. Oleg Silchenko (who handled the Magnitsky case) and sanctioned the arrest of Cherkasov.

Silchenko refused to comment afterward, but he did throw out the phrase “Who knows where I will be soon,” a fairly common remark in a country where people are not used to planning too far in the future.

But it is a question with special resonance and poignancy in this case that has taken on international proportion.

“After this report appeared [was leaked], we started to be pressured by security officials,” said presidential adviser Valery Borschev, acknowledging he received phone calls from officials. “They call me and ask why we are attacking Silchenko, and I answered that we are simply laying out the facts. We are striving for real punishment for those who are guilty, and we have only touched the tip of the iceberg at this point. Important figures stand behind the investigators and tax officials - we hope to get to them.”