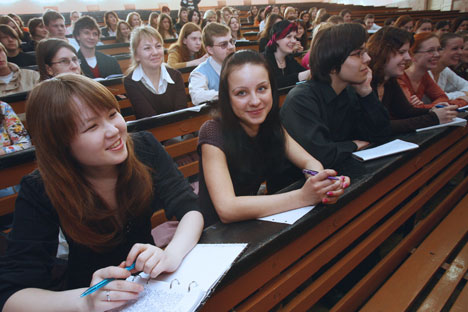 The new move to 'westernise' Russian universities under the Bologna Process has sparked a debate about the dire need to bring Russian education in line with global standards.

Modelled on Germany’s education system, Russian universities are again being “westernised” — this time under the aegis of the Bologna Process. The declaration signed at Bologna University by 28 countries in 1999 set out to create a “European Higher Education Area”, a transnational space with a compatible, harmonised system of education. In 2003, Russia joined the process, indicating its desire to universalise higher education and make its students more mobile in a globalised world.

The process of harmonising higher education across the pan-European space by uniformly adopting the Anglo-Saxon model now has 47 signatory members.

Russia’s process has nonetheless been fraught with difficulties linked to the peculiarities of the Russian system and its distinctiveness from the Anglo-Saxon model. Ironically, the Westernising current in Russian philosophical thought — in this instance, advocated by Prime Minister Vladimir Putin and President Dmitry Medvedev — has seen the Bologna Process come into conflict with the old German education model introduced in Russia in the 18th century.

An enduring vestige of Germany’s legacy in Russia is the spetsialist degree — the generic degree bestowed after five to six years of university study. In October 2007, the Russian government passed a law to bring the degree award system in line with Europe’s. But the law enacting a two-tiered degree system had little effect. Instead of actually drafting a new curriculum, the mandatory B.A. or B.S. level was simply tacked into the curriculum halfway through the old spetsialist degree — amounting to only a change in the veneer of degrees.

The majority of Russian students presently complete all three tiers of degrees (bachelor’s, spetsialist and master’s). They see no point in stopping at the unfamiliar and only partially recognised bachelor’s level. Still, according to the most recent available report on Russia’s progress, the number of students graduating with bachelor’s and master’s appears to be increasing. But this estimated 19% increase is still low, considering that some universities have long offered the “bakalavr” diploma (four years), as well as the “spetsialist” diploma (five to six years) and the “magistr” diploma (six years).

In 1992, Russia passed a law enacting a multi-tiered system of education, but a few Russians enrolled for the bachelor’s since employers did not recognise it and it was seen as inferior to the traditional specialist level. The same problem arose in Germany. The Russian labour market, too, has been sluggish in recognising the bachelor’s and as a result, the bachelor’s degree is often shunned.

“In the new system, there is not enough attention given to the autonomy of higher education. The process of education is still strongly controlled by the government. Still, the government is the source of educational standards," says Archimandrite Cyril Hovorun, an expert on education reforms. "And the universities have less say in their educational programmes in comparison with their European counterparts. I think that the path taken by reform of the education system in Russia is a compromise between the norms of the Bologna Process and the old Soviet conditions. The system is one of compromise.”

Soviet nostalgia is a major challenge to the “modernisation” mantra espoused by President Dmitry Medvedev, but which actually has long been evident in Russia’s Bologna Process, says Roman Selyukov, the deputy director of the “Eureka” Institute on the Problems of Education Politics. Russia’s continued integration into global trade clubs underlines the necessity of Russia’s integration with pan-European education reform. After almost 18 years on the road, Russia may finally be turning the bend onto the final straight of World Trade Organization (WTO) accession.
“I think clearly that if Russia is going to accede to the WTO, we have to encourage as much as possible the competitiveness of Russia’s system of education and related services. Imposing the Bologna Process requires creating infrastructure, which would allow opening up Russia’s education services on the international market,” says Selyukov.

Read more on the topic: Russia calling: Get a degree