Ballerina dances away from United Russia 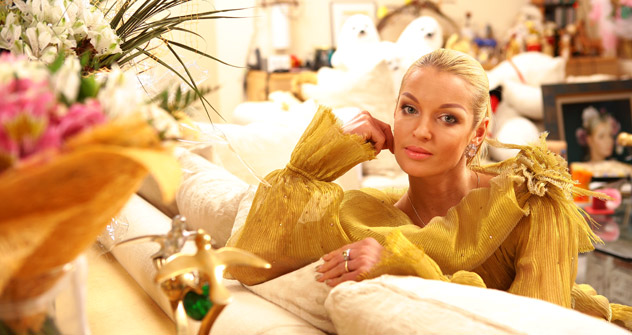 Jilted by the Bolshoi and the ruling party, Anastasia Volochkova still manages to land on her toes.

In her many incarnations--political arm-candy, society princess, purring provocateur, magnificent artist and, yes, fat ballerina--no one has ever accused Anastasia Volochkova of understatement. Take her million dollar wedding to the businessman Igor Vdovin. Volochkova arrived at the Catherine Palace in St. Petersburg sitting in an armchair attached to a hot air balloon and wearing a snow-white dress with its train floating in the wind.

Or consider her recent transition from establishment darling to self-made dissident after a nude photo shoot upset the party of Russian Prime Minister Vladimir Putin: "Today, membership in Vladimir Putin's United Russia party is a much more compromising fact for somebody's reputation than nude pictures published on Internet," she pronounced on her blog. For her, being shunned by the party was a wake-up call, she said. Now she is among its critics.

Volochkova, 35, is the talk of the town again. And she's playing a familiar role: The jilted, outspoken, slightly outrageous diva.

"I am bigger than your party!" Volochkova said, as if speaking to Putin, in a recent interview. The United Russia she famously joined in 2003 and now scorns is maintaining a stiff upper lip. "We have a firm position of giving no comments on the Volochkova scandal," sniffed United Russia spokeswoman Inna Chernavina.

Russians love fairy tales, it is their favorite type of fiction. What else is there to believe in, Russians ask? Volochkova is Russia's living, indomitable fairy tale princess.

In her book “A Story of a Russian Ballerina,” Volochkova compares the chapters of her life with the plots of 12 major Russian ballets she has starred in.  Of course, the heroine triumphs again and again and again. As a teenager, Volochkova heard from her teachers at Vaganova Academy, the notoriously harsh ballet school that also trained Vaslav Nijinsky and Rudolf Nureyev, that a big-boned ballerina like her would never dance on the best stages. The provinces, they said, beckoned.

A few years later, Volockhova debuted as the Mariinsky’s prima ballerina in Swan Lake at the Metropolitan Opera house in New York.

A longtime survivor of backstage battles, surrounded by "jealousy and evil insults," Volochkova describes the drama of the movie Black Swan as "little flowers" compared to the intrigues of the Bolshoi Ballet.

It was the Bolshoi Theater that threw the next "never" at Volochkova, firing her in 2003, a year after she won the prestigious Prix Benois de la Danse. The executives of Moscow’s most famous theater pronounced Volochkova the "fat ballerina," too heavy to ever appear on the theater’s stage again. Volochkova suspects the vindictive hand of a powerful former lover, but will not speak his name publicly. She cried under the marble columns of the Bolshoi, she said. "Nobody had a word of support," she said.

The ballerina remembers with bitterness the day she had to step onto a scale that a New York Times reporter brought to an interview for an independent measure of her weight--without fear or favor. That scale showed 109 pounds, a fine dancing weight for a 5-foot 6-inch woman.

But her Bolshoi career was over in the most embarrassing fashion, after performing as a soloist in six major ballets and touring the world for over five years.

In the wake of the scandal, Volochkova joined United Russia, one of a number of celebrity recruits designed to brighten up a party more associated with colorless bureaucrats. Volochkova says she was a loyal servant. Her image adorned campaign literature. She accompanied regional governors on trips to Western Europe as a cultural ambassador. She demonstrated her famed 42- fouette-turns to 6,000 state apparatchiks, oil magnates, gas company executives and investment fund managers at the country’s major concert hall in the Kremlin. Just a few months ago she danced between the tables at a United Russia gathering, gliding between the men in suits and the vodka bottles.

"For as long as I was spinning with their flag in my hand, they were my friends," she said, "but now they turn their backs."

The souring in her relationship with the party began in 2009 when “paperwork problems” led to her exclusion from the ballot in the race for mayor of Sochi, the city that will host the 2014 Winter Olympics. One of the bespoke, gray men took the job.  Suddenly, she said, solo dance performances were being cancelled for her political impertinence in challenging one of the party's anointed.

The final break, however, did not come until last month when Volochkova photo shopped a semi-nude photo to make it seem like President Dmitry Medvedev was leering at her. And then she posted it on the web.

Senior members of the party dismissed her departure from the party ranks. But Volochkova fought back. She said that in 2005, without her knowledge, the party signed her name on a collective letter in support of the imprisonment of Mikhail Khodorkovsky. The former oil tycoon, she said in a recent assessment, was “more of a man” than those she saw in Putin’s party.

“Anastasia Volochkova attracted the attention of  Russia’s glamorous elite by showing an example of a stoic civil position. I admire her choice,” said Boris Nemtsov, opposition activist and Kremlin foe. Criticizing the party is not taken lightly, critics say, adding that mayors and administrators have lost their jobs for less.

Volochkova likes to say that underneath her fur coats and silk dresses given to her by admirers over the years, she is "a powerful horse with iron stamina." And although it seems she has fallen out of favor with the ruler, her fairy tale life is not over.

In one of her recent blog posts, the ballerina posted photos of a new, $1 million Maybach, the super-luxe automobile.  Curious reporters wondered where she got it. "Where, where?" she wrote on her blog. "I just prayed to God. And He listened to my prayers. I got out of my home, and there it was, my beauty."

Anna Nemtsova is a Moscow correspondent for Newsweek.