Russian Helicopters to be assembled in India 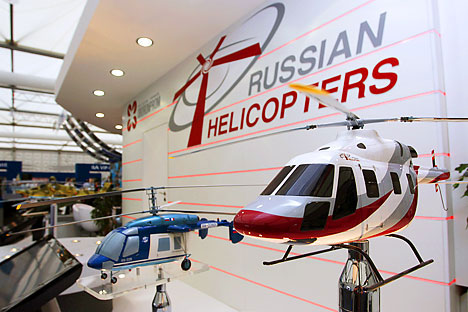 The MiG setback has been a humbling experience for Russian defence contractors. Now, the Russian Helicopter company is sweetening the deal by offering local production in the race for three Indian tenders worth $4 bn.

The Russian defence contractors have been trying to rid themselves of the arrogance that cost them major tenders for supplying MiG-35 fighters to India and T-90 tanks to Thailand.

In a move unprecedented in the country’s history, the Russian Helicopters, JSC announced it was ready to establish manufacturing of military equipment in India with the right to re-export to third countries. The helicopter builders are thus trying to gain the upper hand in three tenders for supplying the Indian Air Force with light highlander choppers, cargo carriers, and assault helicopters worth more than $4 billion in total.

“We may do the final assembly in India and enter other markets from the Indian market base,” Andrei Reus, CEO of United Industrial Corporation Oboronprom, said. The Russian Helicopters, JSC, an Oboronprom subsidiary, is responsible for the design and manufacturing of all helicopters in Russia.

India’s market is of strategic importance for Russian Helicopters Andrei Reus added: "This is a strategic market for us and the most dense in terms of the number of tenders in which we compete”, he noted.

Reus believes that the chances of the Russian company winning all those tenders are quite high, because their equipment meets the Indian party’s requirements. He also pointed out that India had the necessary infrastructure and trained personnel for operating Russian-made helicopters.

Rosoboronexport, Oboronprom’s parent company, is participating in three tenders organised by India’s Ministry of Defence for supplying helicopters of various classes. The biggest one, for light helicopters to be used in high-altitude mountain areas, envisages supplying the Indian Air Force with 197 helicopters worth $2 bn. Kamov’s Ka-226Ts are competing there against the AS-550 from Eurocopter, as well as the A-109 and A-119 from Augusta Westland. In another tender, for 22 assault helicopters valued at $1.4 bn, the Russian-made Mi-28NE is bidding against the American AH-64D Apache Longbow Block III. Finally, a $700 mn contract for 15 heavy cargo helicopters is up in the air between the Mi-26T2 and the CH-47F Chinook from the US competing for it.

The tenders were announced in 2008–2009 and the results are expected in 2011. With this sort of competition, it is only natural for the Russian company to want to better its chance by offering the customer joint production and sweetening the deal with the right to export the output to third countries.

This is unprecedented for Russia. In Soviet history, there was only one instance when, in 1964, Poland received a licence for Mi-2 production. Russian defence industrialists believe the plans to establish production in India with the right to re-export should be a substantial argument in favour of the Russian machines participating in the tender.

It was aircraft makers, namely RSK MiG, that suffered the latest major defeat on Russia’s biggest equipment export market. They presented their most advanced generation 4++ MiG-35 fighter jet for an Indian tender. Throughout the years of selection, Moscow exuded total confidence that the MiG-35 was a sure bet in the competition for the over $10 bn contract. They were so smug that the MiG-35 was the only competitor not even to attend the purchasing country’s main aviation show, Aero India-2011 in Bangalore. Indian government representatives officially stated that not only had they tried to discover, through their ambassador in Moscow, the reasons for the no-show, but had also attempted to persuade Russia to send the plane, but all in vain. Eventually, the MiG-35, which had the advantage of a lower price than its competitors, lost to the European-made Eurofighter Typhoon and Dassault Rafale.

At the same time, the Indian Armed Forces have become virtually the main export market for Russian military equipment, especially since the Chinese customers, having copied numerous models, have switched from purchasing Russian machines to producing their own. According to the Centre for Analysis of the World Arms Trade, the ability to market their equipment abroad gives Russian defence contractors an opportunity to manufacture the most advanced tanks, helicopters, and aircraft to meet their own army’s needs. For example, a contract with New Delhi for 126 MiGs would have permitted a significant reduction in the fighter’s domestic price thanks to economies of scale in production. Now the manufacturing of a relatively small number to meet the Russian Air Force’s needs has become economically unfeasible and those plans are likely to be scrapped.

The Indian customers’ choices are also heavily influenced by a desire to diversify the sources of their weapons supplies; at present, India already receives a significant portion of its military equipment from Russia. In addition, the results of the three tenders may also be affected by a certain change in the Indian Armed Forces’ equipment priorities. In the past, New Delhi was pursuing a technologically “cheap” military. As a supplier, Moscow fit the bill ideally, as it always offered the simplest and cheapest weapons around. The Indian military has now realigned itself towards the most expensive and technologically advanced offerings. That said, the Moscow Centre for Strategic and Technology Analysis believes that it is impossible to predict exactly how the offer of local production of Russian Helicopters, JSC will affect the chances.

"Currently, Russian Helicopters has government orders for 461 machines. There are also, however, so-called quasi-hard contracts, i.e., ones that have not yet been signed for a complete armaments programme. Once all contracts are signed, the orders will top 1,500", the Oboronprom CEO said.

He added that the potential order portfolio was already six times the 2010 level, when 214 helicopters were built.

Dmitry Petrov, the CEO of the Russian Helicopters, JSC says that, in 2010, his company produced up to 10% of all helicopters manufactured worldwide. The same year, the holding’s companies brought Russia’s share up to 14% of the helicopter market in dollar terms, while Russian-made helicopters account for approximately 13% of the total global helicopter fleet, the CEO pointed out. He added that his holding was the number one supplier to the markets of Russia, the CIS, India, and China. On the Russian and CIS markets, domestically manufactured helicopters account for 87% of the fleet in dollar terms.