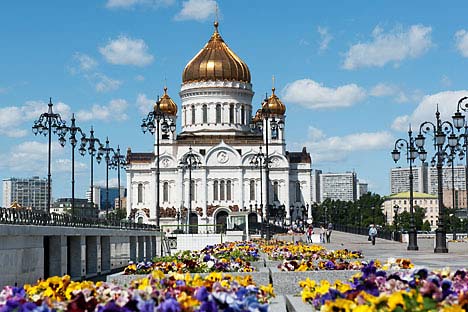 The Cathedral of Christ the Saviour. Source: Lori/Legion media

The actions of the Russian Orthodox Church in recent years show that church leaders need to take another look at what is really important.

The Russian Orthodox Church has traditionally been expansive, thus giving it an edge: expansionism and missionary zeal undoubtedly made it more likely that the people who fell under its influence would become an organic part of the Russian world. In the 18th century, Peter the Great made the church part of government. Even today, though church and state in Russia are separate, the former still has a penchant for management.

The Russian Orthodox Church’s desire to take part in state affairs and to increase its flock through secular channels (for example, through the public schools) can be attributed not only to the ambition to assert its importance. Rather like a spring uncoiling, such behavior is a natural reaction to the suppression of the church throughout almost the entire 20th century. Consider the following figures: before the Bolshevik Revolution of 1917, Russia had 78,000 churches and 1253 monasteries. By 1991, 7,500 churches and 16 monasteries remained. In Moscow, 433 churches were destroyed and in St. Petersburg, about a hundred. The churches that survived were often used as cinemas, garages, clubs and bakeries. When a people is exterminated on such a scale, this is referred to as genocide. In this case, it was the deliberate destruction of the Russian Orthodox consciousness. It’s no wonder that when the oppression tailed off and faith-based persecution came to an end, Russian Orthodox ideologists decided to make up for lost time.

Today, reconstructing its devastated and pilfered property is a major concern of the Russian Orthodox Church. Suffice it to say that museum storerooms still contain about 200,000 icons that were seized from the church, which is now pressing for their restitution along with other “religious property,” a vague concept that includes anything from utensils to church buildings. Now, the church is taking back the buildings it once owned, often over public protests. In the Kaliningrad region—which was once part of Germany—the Russian Orthodox Church did not think twice about gaining possession of Lutheran churches, hardly “Orthodox religious property.” What’s more, the church happily accepts government money left and right. The Russian budget spends up to two billion rubles annually to restore church property. What does the church give in return?

First of all, it formulates (or tries to formulate) social values. Thus, last March the Council of Russian Orthodox Non-Governmental Associations presented a triad of values that, as church leaders saw it, should become the basic values for the 21st century. They are, first of all, faith, followed by Motherland and Freedom. It looks as if this compromise solution is the most the church ideologists could bring forth.

Taking these statistics, the Russian people today are predominantly secular with a substantial share of Orthodox believers whose numbers the church is trying to increase. To do so, it uses not only preaching, but administrative methods as well, including building new churches—sometimes contrary to the locals’ wishes—and agreements with the security agencies (Emergency Situations Ministry, Interior Ministry, the Federal Penitentiary Service, the State Drug Control Agency). On several occasions, Russian Orthodox dioceses are known to have cooperated with regional administrations to ban public events that the church considered to be ideologically incorrect.

Thus, today, like of old, the Russian Orthodox Church has a lust for power and money. The spiritual example that Russian Orthodox priests set for their flock is, to put it mildly, controversial. There are even voices, coming from highly regarded people, who claim that Orthodoxy was an accident, that it had been imposed on Russia and that even a thousand years later it has not taken root in Russia. Is that really so?

At this point I would like to set aside lofty thoughts and share my personal experience. My parents were not brought up with religion. They were members of the Communist Youth League and believed in communist ideals, at least when they were young. But when they decided to marry, my mother’s grandmother took her icon off the wall (where it hung throughout the long years when religion was hounded) and blessed their marriage. The blessing with an icon was important not only for the old grandmother, but for my young and unreligious parents. It was an organic feeling and not something imposed on them.

Several years ago, when the exhibition “Forbidden Art” in Moscow featured an icon of the Virgin Mary smeared with caviar, it insulted not only of my Russian Orthodox friends, but also people who had Russian Orthodox parents. They thought it was making a mockery of an important religious symbol. It was a sincere and ardent feeling on their part.

In the Moscow neighborhood where I live, there often are charitable concerts that take place to raise money for building a Russian Orthodox church. They are staged not by priests, but by local residents, among them singers and composers who love their city. Although the construction has a commercial element to it (they sell “inscribed bricks” to be put into the church foundation) a lot of it has to do with the sincere and selfless desire to help.

One value that the Russian Orthodox Church does not have enough of is kindness and compassion. The upholding of ritual and rules often supplants genuine feeling and compassion. Among Orthodox priests there are many who would sternly tell a woman, “cover your head” in church, oblivious to the fact that the woman is trying to calm down her crying child and has no time to find or readjust her headscarf. A sad young woman who comes to a church to seek solace may hear: “You can’t wear trousers here.” I have witnessed such scenes myself and I can imagine how many souls have been turned away by such uncharitable severity. As long as the Russian Orthodox priest does not become a shepherd first and an administrator second, the faith of many Russians will remain a dream and not a source of spiritual fortitude.

Unfortunately, when a person loses faith in a dream, the dream is replaced with indifference or bitterness.