From water and chocolate, a club scene 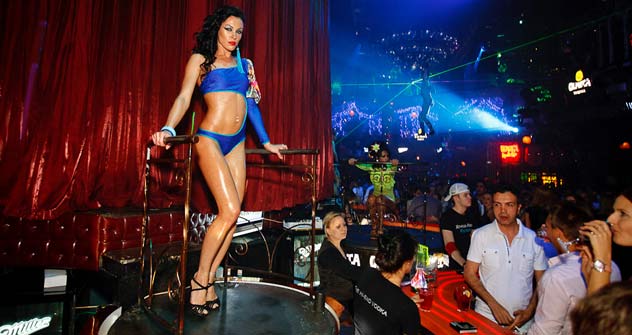 A dancer at Club Rai, located in the old Red October Chocolate Factory. All photos by Ruslan Sukhushin

It’s 2 a.m. on a Saturday and there is a procession of BMWs and rickety Russian cars leading to the site of an old chocolate factory, once renowned for its rivers of chocolate and mouth-watering fragrance wafting over the riverfront neighborhood. These days, the chocolate factory is one of Moscow’s most Dionysian of clubs, a study in crass opulence, what one club blogger called “the nightmare of a 7-year-old boy who ate too much candy and fell asleep.”

Girls, in heels designed for better pavements, get out of taxis and head toward the red brick building. To a paradise of sorts. Some say that Rai, which means Paradise in Russian, is not Moscow’s hottest club anymore, but you wouldn’t know it from the long line of hopefuls standing outside waiting to be let in on this Saturday night.

Entrance is free, but that doesn’t mean just anyone can get in. In its unparalleled celebration of excess, Rai is still the face of Moscow clubdom. It is also emblematic for its face control, which is now part of the Russian vernacular (feis kontrol). Entry depends on one man at the door. Moscow has turned feis kontrol into performance art.

Yet some night owls suggest the oversized glamour clubs, with their chronic techno beats, are becoming a tad passe. At the very least, they have some earthy competition. A vast range of clubs have debuted nearby since Rai opened its doors, even after the financial crisis of 2008. Many cater to entry-level professionals who can’t afford Rai’s VIP couches, or students looking for an alternative venue.

A beautiful young girl comes up to Rai and stares doe-eyed at a man called Vladimir, Vladimir wouldn’t give his last name, saying that he could be referred to simply as “Vladimir Face Control.”

Cars wait outside the Strelka club in central Moscow.

“Can you let me and my friend in,” one girl asked Vladimir plaintively. “I want to go to the VIP area.”

“Our feet are tired,” she moans, knowing that if you are not in the VIP area, there is nowhere to sit down in the club.

“Show me your friend. Maybe I won’t like her,” said Vladimir, explaining in a few brutal words the concept of face control.

Her friend, sheathed in a leopard-skin top, passes muster and they enter the Rai temple, which resembles a mad grotto with elephant heads coming out of the wall. Pretty girls and rich men are still the cynical mainstay for these high-end clubs. Yet a stone’s throw away, another club caters to an entirely different clientele. Rolling Stone Bar and Tattoo appears to be part college pub, part fashion rocker bar. It still has face control, but the contrast between the two clubs so close to each other is enormous. The main gimmick is that those who drink too much may well end up in the tattoo parlor.

The financial crisis of 2008 scuppered plans to turn the chocolate factory into a “million dollar mile.” Luxury lofts were shelved, and instead it has become Moscow’s most thriving nightlife area.

At first, clubs closed down during the crisis. But soon, real estate moguls saw new opportunity for their failing developments — party caverns. “Prices are lower, but real estate is cheaper and new [clubs] are opening up,” said Rolling Stone’s face control man Fillip Alexeev, who says he gets a staggering $8,000 a month for his grueling two-day week.

“It’s a dangerous job,” he said. “I get death threats, people say that they will wait for me after work. The security escorts me home after work.”

His advice on getting in? “You have to look good, have an intelligent face.”

For some, that’s too much pressure. They head over to Mayak, a bar linked to the Mayakovsky Theater. Friday nights is a raucous dance night in a place that has been adopted by journalists, actors and artists. Anyone who doesn’t dance when on the dance floor can expect to get shouted at by the owner.

Some of these places, called “demokratichniye,” or democratic, are not wildly expensive, but they still have face control. And i f you can’t get past face control on looks and charm alone, it seems to be increasingly difficult to buy your way in.

A few hours before closing, Vladimir is surveying the applicants for Rai, some hopeful, some arrogantly expectant. Two young guys with watches that look too heavy for a wrist come up to the second gate.

When told that access is denied, one said, “I have known the club owner for years, do you know who my father is?” The other, Adam, rubbed his fingers together in the global sign for money and asked, “Can we solve this in a Chekhovian way.” The euphemism is odd, but Vladimir understood the gesture. He refused the bribe.

It is now 6 a.m., and nearly all of Moscow’s clubs have closed. The party moves to Krisha Mira, or Roof of the World. Atop an abandoned factory, the club looks onto the Moscow financial center, called Moscow City. Some revelers cannot say goodbye, even when it costs $16-20 for a Cuba libre. Partygoers finally stumble outside to the waiting taxis, the girls’ heels in their hands. They pour into cars as the unforgiving sun rises.