Better a Technocrat at the IMF 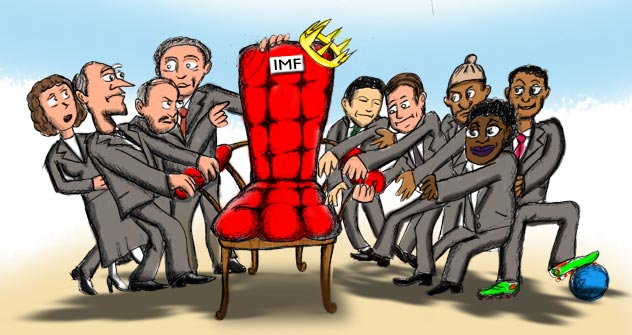 It will be interesting to see what role President Dmitry Medvedev decides to play May 26 at the Group of Eight summit in Deauville, France. Of the many issues on the crowded G8 agenda, the one that is not even to be formally discussed could show Medvedev’s true colors.

This is the question of who will succeed Dominique Strauss-Kahn as the new managing director of the International Monetary Fund. Even though Strauss-Kahn was widely expected to resign next month anyway, the succession issue has taken on a sudden urgency. Strauss-Kahn stepped down last week after being charged with sex crimes that he denies.

In any case, the maneuvering by Europeans to secure what they regard as their rightful position at the IMF’s helm has begun. Last Friday, the IMF announced that a selection process for the leadership post was under way, and it will be up to the membership of 187 countries to select a candidate. The IMF noted in a statement that it was committed to “an open, merit-based and transparent process in selecting a new managing director,” echoing the conclusions of a 2008 report by then-South African Finance Minister Trevor Howard that the covert process that led to Strauss-Kahn’s appointment in September 2007 would no longer be tolerated.

Now evoking specious arguments as to why it is not opportune to apply what was earlier agreed upon and consider qualified non-Europeans for the post, the Europeans will be anxious to coalesce around a mutually acceptable candidate for the post before they debark at Deauville. They would like to create a fait accompli to get the United States on board before the BRICS and other emerging market countries can organize support for a viable alternative.

The Deauville group may still have some relevance, harking back to their domination of global economic affairs resulting from their original mandate as the G5 currencies constituting the IMF’s special drawing rights. This derives from a historical anachronism that gives the Europeans more than 33 percent of the vote in IMF decisions even after minimal reforms agreed upon with such fanfare in 2008 following the controversy surrounding the appointment of Strauss-Kahn.

They are likely to pull this off unless Medvedev improbably sticks a spoke in their wheels. Medvedev, representing a historic European power, stands with one foot in the European camp and the other with his BRICS partners. Where is Russia’s interest in this affair? It may be useful to recall the Russian position at the time of the last change in IMF management.

At the time, Mozhin was quoted in the Financial Times as saying, “There is nothing in Mr. Strauss-Kahn’s curriculum vitae which could make it clear he has the necessary technical skills to do the job.”

This position was backed by Finance Minister Alexei Kudrin, whose ministry noted in a statement that Tosovsky possesses “serious practical experience in the sphere of international economic cooperation and is an acknowledged specialist in financial stability issues. He is a perfect candidate for the post of the IMF managing director.”

In retrospect, the Russian position was as wise as it was prescient. Maybe the IMF would not be as big or politically prominent as it had become under Strauss-Kahn, but it might have remained more relevant to long-term solutions for the global economy.

I believe that too many people are rushing to heap praise upon Strauss-Kahn’s stewardship of the IMF in managing the crisis. This may turn out to be rash. We do not yet know how the sovereign debt crisis in Europe will unfold. It could well be that the IMF, rather than coaxing creditors and debtors to come to a pragmatic solution supported by their respective taxpayers, helped secure even higher levels of debt that will ultimately prove financially and politically unsustainable. And having a politician as managing director, however astute, from the same region as the IMF’s major borrowers may have been the ultimate conflict of interest for the IMF as mediator.

This is also why a serving European politician could be a part of the problem, not the solution.

The traditional prerogative of the Europeans to pick one of their own as the IMF managing director may have made sense when those countries, along with North America and Japan, were the center of global finance. But the center of financial gravity has clearly shifted to the east and the south. This move has barely been reflected in country voting shares in the IMF: China has a quota less than Britain or France, and India’s share is less than that of Italy.

Moreover, perhaps the Europeans could be forgiven if they had provided better-quality managing directors in the recent past. Unfortunately, the three politicians of the past decade — in the end — have proved a disappointment. Of course, their illustrious predecessors in the heyday of the IMF, Jacques de Larosiere and Michel Camdessus, were hard acts to follow. They were also both French and superb technocrats — not ministers.

In the meantime, Russian support for a recent CIS proposal to nominate Kazakh central bank chief Grigory Marchenko as IMF head is hard to take seriously since he doesn’t stand a chance even though he does appear to be a qualified technocrat. Maybe it was just a feint to distract from the European steamroller.

The next few hours could be critical. Much will depend on how the United States and China see the situation. For different reasons, neither is likely to be enthusiastic about a European candidate if other highly qualified, non-Europeans are available. Surely like last time in 2007 Russia wants to see a stronger IMF that can deal with the financial problems of the 21st century.

The Europeans hope to secure their lock, yet again, on the IMF leadership at the Deauville summit. Will Russia play along or try to champion a viable alternative as it bravely tried to do in 2007? This is a chance for Medvedev to demonstrate leadership in the global arena.