Vladimir Putin: At home in nature 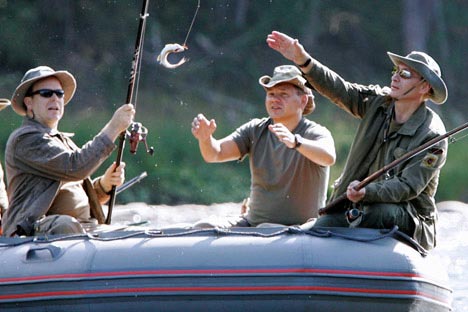 In a rare and exclusive interview, Russia's Prime Minister speaks out on fishing, hunting and why he loves the outdoors.

Outdoor Life has published an exclusive interview with Russia's Prime Minister Vladimir Putin. You can read the interview here.

The magazine published an abridged version of the interview. Here we offer you an opportunity to read the missing parts – and watch Putin in action in the wilderness.

Outdoor Life: I have described your travels on my website many times and believe that the steps you have taken in preserving rare and endangered species as well as your active lifestyle possibly distinguish you as the most charismatic person in the political arena. Are you naturally an unconventional person?

Vladimir Putin: I’m not prepared to try on the laurels of “the most charismatic person in the political arena,” and, frankly, I don’t see anything unusual in my activities related to nature conservation or the desire to lead an active lifestyle. I believe both are the norm for any person. Thank you, of course, for the lofty attributes and assumptions about me, but I can say that I am very well acquainted, and in several cases am friends, with colleagues and leaders of several states and governments, and almost all of them are exceptional, very interesting people, who are undoubtedly better than me at something, although each of us, like any normal person, has pluses and minuses.

O.L.: In 1909-1910, U.S. President Theodore Roosevelt took part in African safaris, publishing notes on them in newspapers and magazines around the world, which resulted in millions of people changing their perception of the African continent, hunting and the attitude towards preserving living creatures. I think if I had the opportunity to join you on one of your next journeys, the articles that would be published afterwards in OutdoorLife magazine could have a favorable impact on the promotion of sport tourism in Russia as well as reveal interesting details about you, as a person who prefers an active lifestyle. I would like to offer you the chance to go bear hunting in Kamchatka and would be happy if you could take me with you.

V.P.: If we’re talking about nature conservation, I would likely cite other examples from the life of Theodore Roosevelt. After all, he wasn’t just an avid hunter, he was just as passionate about protecting pristine nature. His father was one of the founders of the American Museum of Natural History in New York, while his uncle, Robert Roosevelt, was a pioneer in ichthyology and the first person to combat exploitative fishing. Roosevelt himself was around naturalists from childhood, learning from them how to love and respect nature. As a result, during the eight years of his presidency, he declared several hundred million hectares of territory, including the Grand Canyon and Pelican Islands in Florida, a nature reserve. One of his direct achievements was creating the National Wildlife Refuge System, and he was the one who put the Forest Service in charge of protecting and conserving reserve lands. This was all Theodore Roosevelt’s enormous, invaluable contribution to environmental protection and one of his most outstanding achievements. Going to back to Roosevelt’s famous safari, I would like to note that, during that time, the number of people on the planet was much smaller, while the number of animals was much larger. The activities of one hundred years ago and today are incomparable. This completely changed priorities, putting the preservation of animals first over hunting. I’m not a prude and I believe that hunting has a right to exist as a form of recreation, but only in individual cases where it can be regulated properly and animal reproduction can be ensured. Of course, we could take one of the trips and hunt together, but only when there is an extreme need to hunt related to critical overpopulation of, say, wolves in some Russian region.

As for the brown bear, which indeed is one of the most popular hunting attractions in Kamchatka, I don’t think it’s likely that I will ever go there to hunt. And as for me personally, the other animals can also “sleep peacefully” as they say. I more enjoy observing animals in their natural environment and habitat and taking part in scientific work. I assure you this is all just as interesting as hunting, and I suggest you see for yourself, so I invite you to join one of the Russian Geographic Society’s programs for researching rare animals, for example, the snow leopard. And then we could also go fishing somewhere together. I stress, I especially love this type of active recreation.