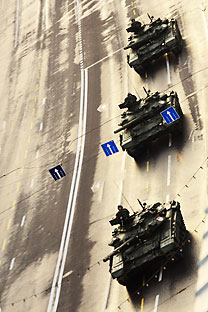 India could sign a new contract with Russia for an additional batch of the T-90S tanks, UralVagonZavod Corporation Deputy CEO Vyacheslav Khalitov said.

“We don’t rule out an additional contract for our tanks,” Khalitov said at the MILEX-2011 international weapons and military exhibition in Minsk, Interfax reported. He didn’t specify the timing or how many Russian tanks would India like to procure.

Working jointly with Rosoboronexport, UralVagonZavod has been successfully fulfilling earlier contracts for supplying and manufacturing the T-90Ss at India’s Avadi plant under a license. “We have excellent relations with our Indian partners. Take for example the fact that ranking Indian officials have openly said that they would like to continue this project and sign a new contract with us,” Khalitov pointed out.

He added that preparations for manufacturing Russian tanks in India under a license have been successfully completed. “We supply our knock-down kits there, and they assembly our machines,” Khalitov added.

India manufactures some of T-90S components locally. “Local components production is accepted international practice,” the Deputy CEO said. The Indian Army has around 700 T-90S tanks in its arsenal, and a contract for the supply of another 400 units is being fulfilled. Each tank costs approximately $3 million.