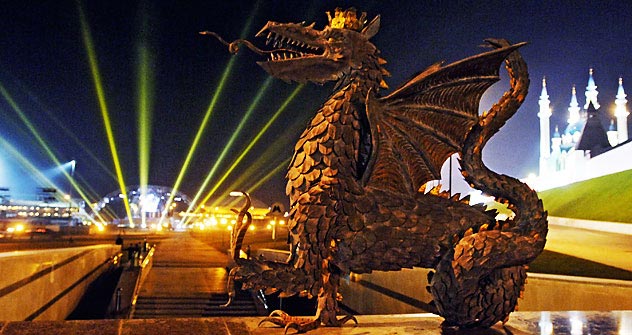 If you left the ancient metropolis of Kazan in Tatarstan a decade ago, you would hardly recognize it upon returning today. The city’s signature white-and-blue kremlin with minarets and Orthodox onion domes still stands majestic, elevated on the bank of the Kazanka River, but an infrastructure overhaul has added whole new neighborhoods to the city in a little more than half a decade.

Low-scale crumbling homes of brick and stone are being restored, coated with fresh paint and, in some places, are giving way to steel and glass high-rises. The vibrant, pulsating city, which celebrated its millennium in 2005, added a metro, several sports arenas, one of the largest technoparks in Europe — Idea — and thousands of square meters of residential and office space since the early 2000s.

New projects, especially those related to sports, have sprouted up around the city, situated at the intersection of the Volga and Kazanka rivers. Kazan is preparing to host the 2013 Summer Universiade (kazan2013.com), when 10,000 university athletes from around the world will participate from July 6 to July 17 in 26 events with a total of 341 medals. In 2018, Kazan will be one of the cities to host the football World Cup.

Readers of the Sovietsky Sport newspaper named Kazan as the sports capital of Russia in 2009. But the city itself prefers to be known as the country’s “third capital” — and in 2009 registered the right to brand itself as such with the Russian patent office.

The tourism industry is rapidly developing in the city where Tolstoy and Lenin spent their student years. Some new projects include a water taxi station on the historic Sviyazhsk Island and Kamskiye Fields campground and spa.

Billions of rubles have been invested into the republic, known as a manufacturing hub. The region’s major industries include mining, oil, chemical and agricultural production as well as factories that pump out helicopters and boats.

Small businesses involved in trade, like shops and distributors, are flourishing, accounting for 25 percent of the region’s economy, significantly higher than the 20 percent national average. Their local share will swell to 34 percent over the next four years, according to Tatarstan President Rustan Minnikhanov.

“It is necessary for us to form a business atmosphere where every economically active person can open and successfully operate their own business,” Minnikhanov said at a conference March 16.

Kazan ranks first out of Russian cities with the most favorable climate for entrepreneurs in a recent study by the New Economic School and consulting firm Ernst & Young.  But small businesses have much room to develop, said Khaliullin, who is president of the Association of Small and Medium-Sized Businesses of Tatarstan.

“I can’t say small business development is on a high level here,” Khaliullin said. “It could grow provided that the president continues to act the way he does.” The city and the republic have been actively trying to attract foreign investment. Sukuk, or Islamic no-interest bonds, will most likely debut in Kazan this year.

Despite Tatarstan’s traditional Muslim roots, Kazan is a multicultural city with a surprisingly harmonious mix of mosques, Orthodox churches, narrow European-style streets with Baroque architecture, large Soviet blocks and modern high-rises. The local kremlin includes both a mosque and a Christian Orthodox church, and crosses are sold alongside Islamic rings at jewelry stores. All signs are in Russian and Tatar, and both languages can be heard with equal frequency.

Unlike some parts of Russia, locals exhibit a high level of tolerance toward foreigners — both light- and dark-skinned.

What to see if you have two hours

Drop by the majestic local kremlin (+7 843-292-7883; kazan-kremlin.ru/main), a UNESCO site since 2000, to admire structures from the 16th to 19th centuries. The site, where some elements date back to the 1200s, includes one of the oldest Russian Orthodox cathedrals alongside the newly constructed Kul Sharif mosque, the largest mosque in Europe, as well as Islamic, Tatar and art museums and government buildings.

Take a lazy walk down Ulitsa Baumana, Kazan’s equivalent of Moscow’s Arbat, which stretches 1.3 kilometers from the kremlin to Tukai Square in the city center. The city’s oldest street is a monument of architecture from different historic periods, as well as a main thoroughfare with shops, cafes, restaurants and clubs.

To learn about the unique Tatar culture, history and scientific achievements, visit the National Museum of the Republic of Tatarstan (2 Kremlyovskaya Ulitsa; +7 843-292-7162; tatar.museum.ru). The museum, founded in 1895, is the largest in Tatarstan and houses a collection of more than half a million items on the natural history of Tatarstan, Egyptian and antique artifacts, and collections of golden coins, ancient books and folk art of the Tatar people. Admission costs 100 rubles ($3.50), while tours in English are priced at 2,000 rubles ($70).

What to do if you have two days

Visit Lenin and Tolstoy’s alma mater, Kazan State University (18 Kremlyovskaya Ulitsa; +7 843-292-7600; ksu.ru). Founded in 1804, the university is one of Russia’s oldest and largest cultural centers and known for its science and math studies. Among its other well-known alumni is mathematician Nikolai Lobachevsky, who enrolled just three years after the university opened and made a name for himself with his pioneering work in hyperbolic geometry.

A short ride northeast of the city is Raifa Monastery, Kazan’s largest operating monastery. The monastery is known for miracles. According to locals, the place is so holy that frogs living in the adjacent lake don’t croak when perched on the bank nearest the monastery.

What else is good to know

Everything in Kazan is written is in two languages, Tatar and Russian, although occasionally you see some English. Tatars are Muslim, while most Russians living in Kazan are Orthodox Christian. There are many intermarriages, and Tatars are considered more family-oriented than Russians.

Because much of the city is being rebuilt, many of the roads are closed, creating traffic that almost rivals Moscow’s standstills. Residents like to complain about the traffic jams as much as they praise all the changes happening in the city. Get a smile from the locals by mentioning the upcoming Universiade, a source of pride for many in Kazan.

The Kazan International Airport (+7 843-267-8807; airport.kazan.ru) receives direct flights from all three main Moscow airports and an eclectic mix of foreign destinations, including three cities in Uzbekistan, Tel Aviv, Istanbul and Frankfurt. Lufthansa and Turkish Airlines are among the foreign airlines that fly directly to the city. A round-trip ticket for the 90-minute flight from Moscow starts at $150 to $200.

A taxi is the best way to get into the city since the airport is about 27 kilometers southeast of Kazan. The airport’s official taxi service is Taxi-S (+7 843-500-0005; taxikazancity.ru), and a car can be ordered at the terminal or by phone. The fare is 800 rubles ($28) for the 30-minute ride to downtown Kazan.

Aeroexpress, the airport express train service in Moscow, is expanding to Kazan and plans to build a train from the airport to the city.

A train from Moscow’s Kazansky Station takes about 12 hours and arrives at Kazan’s train station near the city center. Plans to build a high-speed rail line to connect Moscow with the city for the 2018 World Cup are in the works, with construction expected to start in 2013.

Read more on the topic: India interested in cooperation with Tatarstan