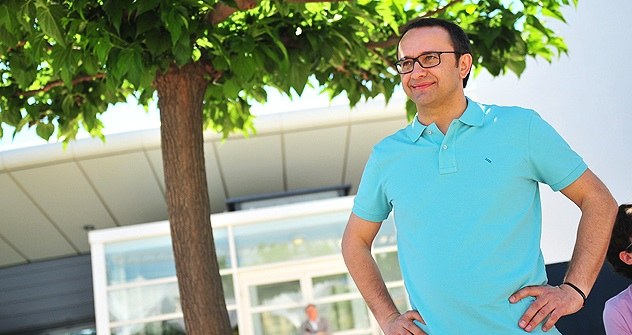 Director Andrei Zvyagintsev discussed the philosophy behind his art on the eve of the Cannes Film Festival.

Actor-turned-director Andrei Zvyagintsev began appearing at film festivals with his very first movie. In 2003, “Vozvrashcheniye”(The Return) earned him two prizes at the Venice Film Festival. In 2007, “Izgnaniye” (The Banishment) was in competition at Cannes, and its star, Konstantin Lavronenko, won the prize for Best Actor—the first actor in a Russian film to do so. Zvyagintsev’s third film, “Elena” (2010), reportedly provoked heated debates this year at Cannes among members of the selection committee. Ultimately, “Elena” officially closed the festival.

In “Elena,” Zvyagintsev covers one of today’s hottest topics— the invasion of barbarians—although the action concerns just one family. Elena (Nadezhda Markina) is married to a rich man with political connections (Andrei Smirnov). Her feckless son and his family live on Smirnov’s money. A false sense of indebtedness prompts Elena to commit a crime. On the eve of “Elena”’s premiere at Cannes, Andrei Zvyagintsev spoke to Itogi’s Irina Lyubarskaya about himself and his film, good and evil, and the light at the end of the tunnel.

Itogi: For the first time, the name of your film is not metaphorical.

Andrei Zvyagintsev: No other name turned up. I really only liked one name. Elena is the name of the heroine. Why not? Like “Evgeny Onegin,” like “Anna Karenina,” like “The Brothers Karamazov.”

I.: They say that “Elena” might not have been a Russian-made film.

A. Z.: Yes. A British producer tried to put together a project of four films. The subject: apocalypse, with complete freedom of interpretation. My co-author Oleg Neginy and I thought about it for three weeks and then Oleg quickly wrote a script. But the producer still had to find the other three stories, and that could take years. So we left the project, showed the script to Alexander Rodnyansky — and soon we were underway.

I.: In “Elena,” there is not only dramatic tension, but quiet humor. The script can be read either as a comedy or a tragedy.

A. Z.: If only as in the case of Chekhov, whose comedies Stanislavsky staged as dramas. One of the producers tormented me with the question: Where’s the light at the end of the tunnel? And while fighting to keep him from interfering with the conception, I realized that to convey hope directly from the screen is a terrible sham. I don’t want to deceive the people sitting in the audience. It seems to me that the absence of any hope or light at the end of the tunnel, like a slap in the face, forces a person to think about his fate and to look for hope himself.

I.: But at the end of “Elena,” the people identified with the barbarians can see hope.

A. Z.: Those people will be saved only by a terrible catastrophe, one that makes them understand what a horror their life, in fact, is. I do, of course, hope that audiences will see how Elena, in committing murder, destroyed herself. She broke her inner construction, the moral model for her existence. To me, it’s clear that’s what the end of the film means. But Oleg said to me once that most people will see her action as entirely justified, to save her family. And that is horrible.

I.: In Woody Allen’s “Match Point,” the hero also commits a murder, but we sympathize with him and so side with evil.

A. Z.: “Match Point” is a remarkable movie. But this is not a question of siding with evil; it’s about having to look the truth straight in the eye. Myths and fairy tales about good triumphing over evil don’t always work. One has to have the courage to realize that evil is flourishing, affecting us — and what of it? But, actually, in these categories, the conversation can’t be deep. No one triumphs over anyone. Everyone loses. These are the times we’re living in.

I.: When did you fall in love with the movies?

A. Z.: It happened in my second year at GITIS [State Institute of Theater Arts in Moscow] when I saw Antonioni’s “L’avventura.” I’d never heard of him before. The film was shown at VGIK [Cinematography Institute] and I had gotten in with a contraband ticket from a friend who was a cameraman. I walked out absolutely stunned. I suddenly understood that a movie is not just telling a story, that the language of film is not just conveying verbal meanings. I had seen a thing that staggered me with the extraordinary sensation of a miracle. A film, it turned out, could convey something fine, invisible and inexpressible by any other means. Afterwards, my friend came up to me, very cheerful, and he saw that I was blown away.

I.: Hadn’t you ever seen the films of, say, Tarkovsky?

A. Z.: I had. I saw them when I was still living in Novosibirsk. There was a Tarkovsky retrospective. This was in 1982. “Stalker” had just come out. Yes, I’d seen Tarkovsky, and also Bergman. But the miracle happened at “L’avventura.” Maybe it’s just that I was finally old enough to understand such things.

I.: Today the rhythm of films is much faster, crisper. The way, for example, popular Korean film directors do it.

A. Z.: Let them. For me it’s not organic. I remember I noticed at an awards ceremony when one of the nominees for Best Editing was a film with 6,000 splices. Tarkovsky’s “Zerkalo” consists, I think, of 200 camera shots. That is a completely different type of thought process. For example: I see a fist, quick splice, a face, a punch, now the enemy is hurt, now the hero is jubilant. And all that takes no more than seven seconds. In other words, I’m being offered pictograms of reality. As expressive as road signs. But a film that plunges into a story’s actual rhythm is definitely more, wider and deeper, than a system of signs.

It’s also a sign of the rhythm of life today. Everyone wants to save time, to understand more quickly where a conversation or a movie is going. There’s a sort of frenzy in everything, and that’s where the distrust people feel for each other comes from, the suspicion, the irony, the lashing out at what is most sacred. That’s why people need outlets. They walk into a movie theater, sit down and calmly watch a crow fly into the frame. That’s the first shot in “Elena,” and originally it was three minutes long. I watched it over and over during two months of editing and kept taking bits out of it. Now it’s a minute and 20 seconds.

Long, long. I know. And static. But then many things are happening inside — the sun is rising. The next shots, showing empty rooms, also seem long. But in fact they’re only 12, 14 seconds.

I. So what have we come to, if to us 12 seconds of nothing happening on screen is a catastrophe?

A. Z.: I would have made those shots even longer. I revel in the sense of meditation that comes from looking at an object or a person for a long time. For me the hero of a film is the language of that film, the rest is characters. And of course the heroine is the idea.