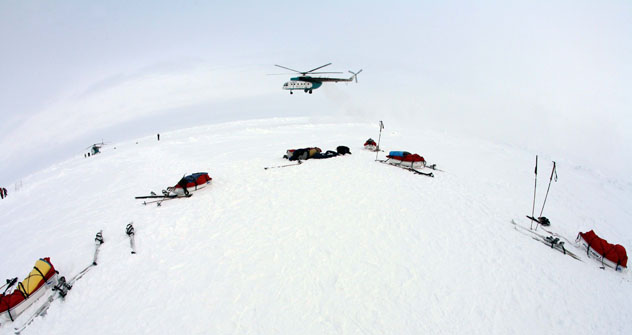 For those who have seen it all, a visit to the North Pole via the Russian base Barneo is at the top of the list.

I have seen all kinds of hotels. In Florida, there are underwater suites; you can spend a night in the trees in Turkey; sleep underground in a coal mine in Sweden, or in capsules at a Japanese train station; in a former church in Scotland or in a former prison in Slovenia. But sleeping at the North Pole was an even more unique experience. The Russian Arctic ice base Barneo doesn’t even have an address. Every year for more than 10 years it has appeared on the map for just 40 days, from the end of March until early May. Several tents and an airstrip float over the ocean currents, causing the coordinates on a GPS screen to change every second.

The drifting camp is the northernmost hotel in the world. It is the only shelter in the expanse of the Arctic Ocean for polar explorers, scientists and tourists from all over the world, who want to play at being polar explorers and touch the ever-moving tip of the Earth.

In this unique refuge, you never stand still. You move willy-nilly even while you sleep or eat, and even when you stand trying in vain to tell east from west because all the directions are due south and due to the polar day, there is no sunrise or sunset.

According to the organizers, finding a suitable ice floe to host the Barneo camp sounds simple. Two bases are set up in early March, the first at about 87 degrees latitude and the second closer to the Pole. Fuel and an ice reconnaissance group are flown in and the search for a large and solid ice floe begins.

The ice floe coordinates are reported to Murmansk, which sends a plane with tractors. An airstrip is cleared and a commission comes from Krasnoyarsk to grant approval. Then the personnel are brought in and the construction of the camp begins.

For most visitors to Barneo, the base is not the climax of the trip; it is just a temporary stop where you spend several hours or days before and after the main event, the conquest of the North Pole.

Tourists are delivered to the camp from the mainland by plane, landing n the northernmost airstrip in the world. From there, the journey to the Pole is made by skis, dogsled or by parachuting from a helicopter. The camp’s organizers are ready to cater to your every whim, understanding that a trip to the Pole via Barneo is every bit as expensive as tours to elite, comfortable and less frigid vacation destinations. The pleasure of sleeping in temperatures of -30 celsius, sometimes in snowstorms, in tents with outdoor toilets costs between 10,000 and 30,000 euros, depending on the duration of the trip.

Even so, every year Barneo plays host to hundreds of amateur and professional polar explorers as well as celebrities and the simply curious. For example, Prince Albert II of Monaco visited the North Pole in 2006. Just several days before my arrival, the UK’s Prince Harry had left the camp. During his trip, a half-meter-wide crack opened in the middle of the runway, severing the air link to the outside world. Fortunately, within two days, the ice plates rejoined. Otherwise, the camp organizers would have been forced choose a suitable ice-floe to build a new runway.

I wasn’t able to meet Matvei Shparo, one of the new generation of Russian polar explorers, since he was accompanying a party of young skiers to the Pole, but I did meet dozens of unshaven but happy tourists. Clearly, money was not a problem for them. Nor did they mind the very basic conditions in the camp. Everyone was glad to be able to say, “I’ve been there, too.”

It is amazing how every year, this drifting patch of ice—whose lifespan depends not on people but on God’s will and weather conditions—becomes a crossroads on the way to the Pole that neither commoners nor royalty can afford to miss.

On the way to Barneo from the Norwegian island of Spitsbergen, the only thing I could see from the plane is water and ice. From the moment we landed at Barneo, there was no time to be afraid. The tourists on my flight were welcomed by polar explorer and pilot Alexander Orlov, the head of Barneo, Victor Boyarsky, a legend in his lifetime who has conquered all the Poles and is director of St Petersburg’s Arctic and Antarctic Museum, and Alexander Bakhmetyev, the commander of the Krasnoyarsk Air Unit responsible for the air link with Barneo.

Almost immediately we were invited to a welcome dinner that involved slices of frozen fresh fish with vodka or straight alcohol served on an empty fuel drum.

But there was no time to linger. We were given 10 minutes to carry our rucksacks to the camp and be assigned a bunk, put on warmer clothes and make a dash for the helicopter. Its engine and blades speed up and the huge MI-8, packed with people and gear, finally lumbers into the air.

The next stop is near the 89th degree northern latitude, where we drop five Australians who want to reach the Pole on skis. The chopper was airborne again, and within 15 minutes we were on the Pole.

A middle-aged couple from New Zealand produced a bag with golf clubs and started playing golf. Four Japanese women whipped out their cameras and tried to take pictures. The guide uncorked a bottle and poured out champagne, but no one managed to have a drink it before it froze. Then we all stared as an English Romeo dropped to his knees in front of his Chinese Juliet and proposed on the spot.

Back at camp we were treated to a hot meal. Borshch with sour cream was the first course. “It’s natural, brought straight from Moscow,” the chef boasted. The sour cream and yogurt can be kept in a warm tent for a long time because there is a steady refrigerated temperature at floor level.

For the second course, there was not canned meat, but fresh beef cutlets. “Barneo is the best freezer for storing meat,” joked the chef. As a side dish, there was pasta in pesto sauce.

The lounge with its ever-boiling samovar serves as a round-the-clock meeting place. You can sweeten your tea or coffee with cookies and exotic stories.

At one table, American scientists were bemoaning the loss of an expensive buoy that was blown into the sea. At another, the local guide was sharing his rich experience with a newlywed couple. He claims to have been present both at weddings and divorces at the North Pole. Once a client who had reached the Pole immediately called his wife over a satellite phone, boasted his triumph and told her that he had decided to divorce her. At a third table, a group of businessmen tourists are busy exchanging their business cards.

The pristine blue ice shimmers with gold for the organizers of the tourist business in the Arctic. It turns out that the pioneer spirit is still alive in this world, and many people are ready to pay just to learn how Robert Peary and Umberto Nobile felt away from home.