Who needs a free Khodorkovsky? 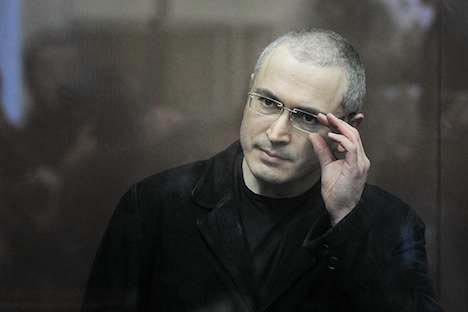 Former Yukos head may be awaited by Dmitry Medvedev and Mikhail Prokhorov.

May 31 Khodorkovsky and Lebedev won against Russia in the European Court of Human Rights and, at the same time, filed for parole. It won’t be long before they are released, say political analysts, as the detainees are needed by the “right”, the presidents, and modernization.

The former head of Yukos and ex-director of Menatep have decided to submit a petition for parole at the Moscow Preobrazhensky District Court. Khodorkovsky’s last attempt, which was made three years ago, was unsuccessful, and Lebedev had decided not to even try. Today, the situation has changed, clearly to the advantage of the prisoners, say Trud’s experts.

“The release of Khodorkovsky and Lebedev is, first and foremost, beneficial to Medvedev. His involvement in this will serve as a trump card in the political game,” says Mikhail Vinogradov, president of the St. Petersburg Politics Fund.

The president and the prime minister have chosen opposing viewpoints in the Yukos case. On May 18, Dmitry Medvedev said that a free Khodorkovsky “is absolutely non-threatening”, which could have influenced the decision of the Moscow City Court to reduce his jail term by one year. So, if the Supreme Court of Russia reduces the term by several more years and then approve him for early release, then Dmitry Medvedev will have reasserted himself in the eyes of Russian citizens as an independent leader, just as he did in the case of Luzhkov’s resignation.

Without a free Khodorkovsky the president’s modernization stalls. Foreign investors do not want to work in Russia until they ascertain the legal rules of the game in the Russian field of innovation.

The “rights” will save a space

Mikhail Prokhorov and the Right Cause Party, which he has personally revived, are also waiting for the prisoners. According to the director of the National Strategy Institute, Stanislav Belkovsky, the “rights” would accept Khodorkovsky and Lebedev in their ranks – which would win them more votes – especially considering the fact that the head of Onexim Group has already expressed regret about the new term assigned to the head of Yukos.

The chosen candidate in 2012

“Khodorkovsky’s release from jail is beneficial to the next president of Russia,” says Igor Bunin, director of the Center for Political Technologies. “It will be done by Putin or Medvedev, whoever becomes the head of the country in 2012.” The country needs to change its image, to finally respond to the EU’s accusation of judicial lawlessness, and to attract investors. The political scientist is confident that Vladimir Putin will not be deterred by his stated position – “a thief must sit in jail.” It will be a gesture of goodwill, and it will be even more dramatic than if the jail cell door was opened by Dmitry Medvedev.

However, according to Sergey Markov, director of the Political Research Institute, no matter who initiates the release, the authorities and the prisoners will first need to come to an agreement. “Khodorkovsky and Lebedev will be forced to stop criticizing the state and speaking out against those who divided the property of Yukos,” says Sergey Markov.

For now, the international community continues to frown on the sentencing of Khodorkovsky and Lebedev. Yesterday the European Court of Human Rights, though it did not find solid proof that the case was politically motivated, obliged Russia to pay the prisoners €10,000 in damages and €14,543 in legal fees.

Strangely, US President Barack Obama is also interested in seeing the businessmen released. He is currently gaining points for his second term in office, and a democratic victory in Russia would be rather timely, says Stanislav Belkovsky. At last year’s APEC summit in November, the Russian and US presidents held a meeting, during which Barack Obama asked the Russian president to resolve the issue concerning Khodorkovsky, to which Medvedev replied: “Okay Barack, I hear you.”