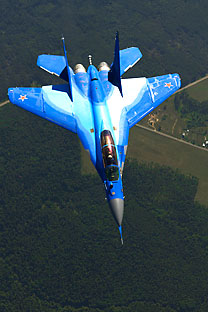 The Indian navy has received the second batch of Russian MiG-29K jets, bringing the total of its carrier-borne fighter jets MiG-29Ks to nine.

Under the deal signed by India and Russia in 2004, Russia is to supply 12 single-seat MiG-29K fighters and four two-seater MiG-29KUB trainer-cum-combat jets.

Russia's MiG Aircraft Corp. has delivered a flight simulator and other technical equipment to the Indian navy as part of the bargain.

In March 2010, Russia and India signed another $1.5 billion contract for the purchase of 29 additional MiG-29K Fulcrum-D carrier-based fighter jets.

Delivery of those planes is to begin next year, about the time Moscow is expected to deliver the retrofitted aircraft carrier.