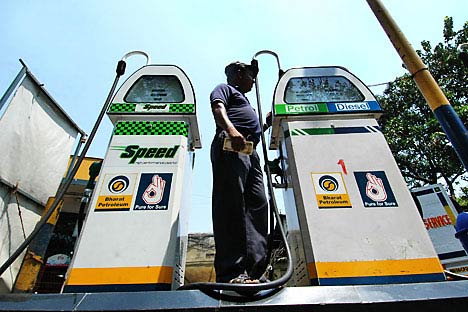 Petronet LNG Ltd. (PLNG), India’s biggest importer of liquefied natural gas, and Gazprom Global LNG, through its Singapore affiliate, Gazprom Marketing and Trading Singapore, a 100% subsidiary of Gazprom Marketing & Trading, have concluded a memorandum of understanding for the long term supply of LNG.

Under the terms of the agreement, Petronet will purchase fuel from Russia’s OAO Gazprom and boost long-term contract volumes by 28 percent.

Petronet plans to buy as much as 2.5 million metric tons of LNG annually for 25 years, the company said in an e-mailed statement today.

“This MOU is a key step in diversifying our LNG supply portfolio and this relation will go long way in developing mutually beneficial relation between the two Companies“, said Mr A K Balyan, Managing Director and CEO.

Gazprom Marketing & Trading buys gas from the export division of Gazprom as well as other producers, Vitaly Vasiliev, the unit’s chief executive officer, said in an interview with Gazprom’s corporate magazine in April.

“In the initial stages, the gas will be supplied from Gazprom Marketing & Trading’s portfolio of LNG capacity assets,” Paddy Blewer, a London-based spokesman for the unit, said by phone today.

Petronet rose 4.2 percent to a record 142.20 rupees in Mumbai, compared with a 0.6 percent gain in the benchmark Sensitive Index. The stock has climbed 14 percent this year.

The New Delhi-based company currently imports 7.5 million tons of LNG a year from Qatar under a long-term contract and reached an agreement with Exxon Mobil Corp. in August 2009 to buy 1.5 million tons annually for 20 years from Australia’s Gorgon project.