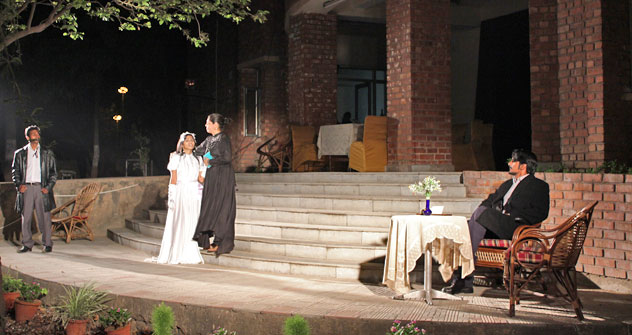 In mid-May, Delhites got an emotive respite from the blistering heat when Three Sisters, the classic play by iconic Russian playwright Anton Chekhov, was staged at School of the Arts and Aesthetics compound in Jawaharlal Nehru University.

An elevated corridor of an old style building with huge pillars and narrow but long steps extending towards a pavement amidst lashes of bushy orchards formed a natural stage for a theatrical production that otherwise may represent an old mansion artificially using a painted back curtain.

The play conjured up the late 19th century wealthy Russian household ambience beautifully. It created a new spirit of acting in the campus as the play goes back to 1900, 17 years before the Russian Revolution radically changed the Russian society forever. The acting was superb as the theme of the play – the degeneration of Russian aristocratic ideals, giving way to crass insensitivity - shone through it.

Instead of going for an open air stage or an artificial back curtain stage, the director Ramendra Chakarwarti, a JNU student, managed to retain the natural atmosphere of the plot almost the way Chekov described it in the play.

The story develops in a rich mansion of a military general through the memories of the three sisters -- Olga, Masha and Irina -- and the portrayal of their suffering, which emanated from their brother Andrei’s marriage to a scheming young woman who eventually control their lives. It delineates the upbringing of children in an upper class Russian family of the time and how the educated and privileged class degenerates during the course of time due to their failure to move according to changing times. In the play, Moscow becomes an emblem of hope and yearning as the three sisters pine for a day when they could go back to the city and escape from the boring life of a remote provincial town. In fact, boredom, gloom and ennui pervade the mental atmosphere of the play. Olga and Irina often appear tired, but they continue dreaming that their brother would one day become a professor in the Moscow University.

The spirit of the play — the atrophy of the refined cultured life, the promise of revolution and hope for enjoyment of work in the near future — is re-created deftly by the actors. The maximum use of natural space and natural properties such as the building corridor, pavement, garden and so on gave an unrivalled opportunity to the actors and director to do justice to the drama and the unfolding changes in the society it represented. The production team invested well in research and it showed in the costumes and artefacts of the age such as long gowns of ladies and coats of men and the culture of samovars, wines and vodkas. The lighting arrangements were imaginative and took the audience to the 20th century Russia for a couple of hours.

The play was prepared and staged by The Eurasian Foundation, a think tank that actively promotes the Indo-Russia relations, in association with Sehar, an amateur theatre group consisting of mostly JNU students. Prof. Arun Mohanty, a director of the Eurasian Foundation and a recipient of the prestigious Pushkin award, was the driving force behind concept and staging of the play.

More than four hundred spectators, including students and professors of JNU and art lovers of the capital, savoured the play from beginning to end. The play ended with a shimmering ray of hope that was shown through lighting lamps by all the actors, the way Moscow symbolically represented their dream and hope for a better tomorrow.