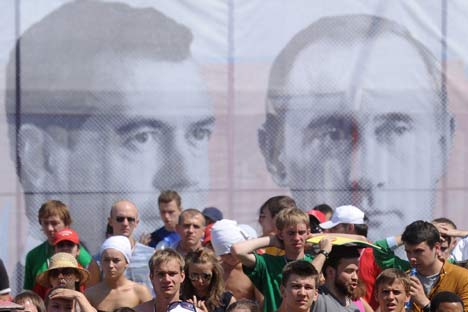 By avoiding the formation of formal political platforms, Russia’s ruling tandem slows down, perhaps even arrests, the development of the market for political ideas in Russia.

During his recent news conference, Russian President Dmitry Medvedev was widely expected to announce that he had decided to run for a second term. Medvedev, however, defied the expectations and restricted himself to his usual line that “the decision is coming soon.”  In revenge, pundits and journalists called the news conference disappointing, lacking substance and even outright boring.  Yet media coverage of the event was extensive and emotional, making the news conference one of the most celebrated “boring events” in Russian political history.

The barrage of criticism notwithstanding, Medvedev’s news conference provided fresh evidence that the competition of political ideas is returning to Russia.  However upsetting his unwillingness to vow a political “I do,” the president did articulate a number of important political points.  Some of these points directly challenged positions outlined by Russia’s other top politician, Prime Minister Vladimir Putin, in his latest public statements.

Whatever Medvedev and Putin mean when stressing their agreement on “strategic” issues, they do differ on the topic Medvedev has made the hallmark of his presidency: Russia’s “modernization.”  Make no mistake: in dispute is not the “speed” of modernization or the amount of “unwarranted liberalism” allowed down the modernization road.  Medvedev envisions political reforms – first of all, the “de-monopolization” of the political system – as and intrinsic part of the modernization of Russia.  For his part, Putin thinks of modernization in terms of purely technocratic solutions.  Even in the area of international relations an increasing rift between the two leaders is obvious: Medvedev is promoting a more flexible – sometimes almost “value-oriented” – foreign policy approach while Putin is sticking to a more traditional (“us vs. them”) ways of conducting Russia’s dialogue with the rest of the world.

What is really important is that these differences do not simply reflect the diverging personal opinions of Medvedev, Putin and their teams of advisers.  These differences demonstrate the existence of factions within Russian political and business elites. These factions embrace competing views on Russia’s national interests, needs, problems and future.  Moreover, the political platforms that are being proposed by the president and his prime minister have begun gaining recognition and support from different parts of Russian society.

The identity of Russia’s next president will have a profound short-term effect on the way the most important problems facing the country will be dealt with, including liberalizing the economy, fighting corruption, and upgrading national security.  But these problems will not go away after the presidential election; the long-term approaches to their solutions will continue to be subjected to debate.

By postponing their 2012 decision – or even refusing to provide a deadline for it – Medvedev and Putin prevent the country’s political discourse from morphing into the most appropriate format: The format of election campaign platforms, either for political parties or individual presidential candidates.  By reducing such a public discussion to a string of euphemistic hints at news conferences and in speeches, the tandem slows down, perhaps even arrests, the development of the market for political ideas in Russia.

It remains to be seen if the revitalization of ideological diversity, however fragile, will be matched in the future by the increased political competition.  Some promising signs are definitely out there — just remember the Duma elections in 2007.  The only question back then was by how wide a margin United Russia would win; today, no one can guarantee United Russia even a simple majority. Everyone seems to agree that the party’s electoral base continues to erode.  Exacerbating the trend is United Russia’s perennial inability to generate new ideas and present new, attractive faces to the voters.  Back in 2007, everything was easy: All the party needed to grab the Duma supermajority was the high ratings of its leader Vladimir Putin.  Apparently, this does not work anymore, as the creation of the half-baked All-Russian People’s Front attests. If United Russia needs a “front” to ensure its domination in the Duma, this means that even Putin’s popularity, itself in decline, has lost its magic touch. True, United Russia can still rely on its formidable election campaign machine and almost unlimited administrative resources in the regions.  But in 2007, the party had a devoted cheerleader in the Kremlin.  Will the Kremlin’s current occupant be equally supportive?

One of the intrigues of this year’s Duma election season is the future performance of the Right Cause party.  The party is yet to elect the billionaire Mikhail Prokhorov – an energetic, charismatic and politically untested businessman – as its leader, but speculation abounds that under Prokhorov’s leadership, Right Cause may form the second largest Duma faction.  The hoopla surrounding Prokhorov’s rush into politics aside, the importance of the emerging of Right Cause as a potential parliamentary party is hard to overestimate.  Since the imprisonment of Mikhail Khodorkovsky in 2003, large Russian corporations have had to rely on carefully choreographed meetings with the president and the apolitical Russian Union of Industrialists and Entrepreneurs to defend their interests.  If Right Cause enters the Duma, it will provide the oligarchs with a venue to directly influence the country’s economic policies.