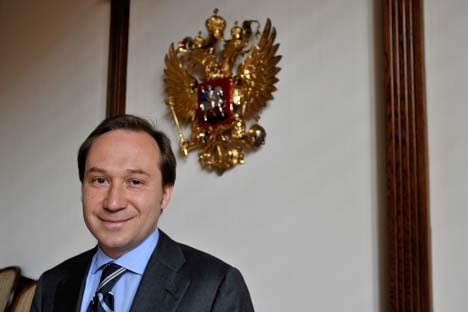 As the Russian government prepares to privatize more of its assets, Ben Aris, editor-in-chief of Business New Europe and Russia Beyond the Headlines contributor, sat down with Alexei Uvarov, head of the property relations department of the Ministry of Economic Development to discuss how the sales will proceed.

RBTH: What is the goal of the privatization program – to make money or to get business out of state hands and into private hands?

Alexei Uvarov: It is a combination of the two: money and management. The federal budget is in deficit, but raising money is not the overriding goal of the program.

The privatization will have a good effect on the companies that will become transparent and understandable to international investors, as they will brought to the same high standards as in the west. We want our companies to meet this standard.

RBTH: How many companies are being sold and how much money do you expect to raise?

A.U.: It is a three-year program and it is very big. There are more than 1,300 [companies] on the privatization list, of which about 90 percent are small- and medium-sized enterprises [SMEs]. These are companies that have ended up in government hands during the transition of the last 10 years. They are state-owned, but most of these companies are not bigand they will only be interesting to local business investors.

RBTH: It is only the top 10 percent of the companies on the list that will interest the international investors. And these are big strategic companies that we plan to sell off gradually through 2013 and raise 1 trillion rubles ($33 billion) in the process. We expect to raise 200 billion rubles this year with the sales of stakes in Sovkomflot and a stake in Sberbank.

RBTH: How will these companies be sold? By auction, through IPOs or from direct negotiation with foreign strategic investors? And will you sell controlling packets or in pieces?

For example, we could sell a controlling package to a big foreign investor or sell them via IPOs in chunks with subsequent issues of shares.

The government has hired several investment banks that are studying the company and will advise us on what is the best method for selling them.

RBTH: Following the infamous “loans-for-shares” auctions in the mid-1990s, auctions have a bad name in Russia. What can you do to ensure auctions are transparent and open to everyone?

A.U.: The auctions will be absolutely open and transparent. We didn’t apply the proper rules to “loans-for-shares” auctions more than 10 years ago. Actual privatization law envisages clear auctions, so anyone that wants to can participate. All they have to do is pay the deposit and then they can participate.

RBTH: While there are a few important companies on the list, won’t it be hard to sell most of the companies? For example, in May the attempt to sell Murmansk port failed as there were no bidders.

In 2010 and this year, we have sold most of the objects put up for auction, despite the failure of Murmansk, but if the object is a good one then it will be sold.

RBTH: What are the major companies on list that will most interest foreign investors?

A.U.: In 2011, the major companies to be sold include Sovkomflot and a 7.5 percent stake in Sberbank. In 2012, among the most important companies on the list are FSK, RusHydro, and another 10 percent of VTB Bank.

Sovkomflot is the one of biggest shipping company in the world, and it already works to international standards. It already has to compete with its international peers, so it is already ready to be sold.

We plan to sell a 25 percent minus one share stake this year. it will probably be sold as an IPO, privatizing the share through the stock market, and use it as an instrument to raise funds and improve the quality of the market. If it works well, then the value of the shares will go up, and if it goes badly, then they will go down.

Later we will sell another 25 percent and could sell a 25 percent stake plus one or two shares, and that could happen in 2015.

RBTH: Another company on the schedule this year is Perm Pig, a government owned agricultural concern in an attractive sector.

A.U.: Perm Pig is one of the strongest factories in Russia and 100 percent owned by the state. We will give the mandate to the investment banks to prepare the company for sale, and they will look at the market and the company to decide how best to sell it. It could be sold on the stock market or it could be sold to an investor, but in this case we will sell a 100 percent of the company in the privatization.

RBTH: Some of these companies are very expensive – isn’t there a danger of flooding the market with shares, as the market only has a limited capacity to absorb offersof these sizes?

A.U.: The valuation of some of these companies is very high and we can't sell them all at once. We also understand that Russia’s privatization program is in competition with the privatization programs of other countries, which are also selling companies to raise money for their budgets. There is a lot of activity on the international markets at the moment and investors have a great choice of companies to choose from but there are limited funds available. But, we believe it is possible to raise 1 trillion rubles in the next three years.

RBTH: The government has done an about-face as some of the companies on the list are included under the “strategic investment law” that was passed in 2008 and excludes foreign investors from some sectors. How will these companies be sold?

A.U.: The strategic objects will also be sold and can be sold to foreign investors, however, there will be a state commission that will review the sale. But there are only a few of this type of company on the list, like the Murmansk port. The deal will have to be reviewed by the commission but the sales will almost certainly be approved.

A.U.: Market conditions are important, as we don’t want to privatize objects irrespective of the price. We do want to sell these companies over the next three years, but we won’t sell them cheap. Getting a good price is not the top priority, but we are not going to sell at any price either. We are planning to sell Sovkomflot and Sberbank this year, but if the market conditions are very bad we will delay the sale.