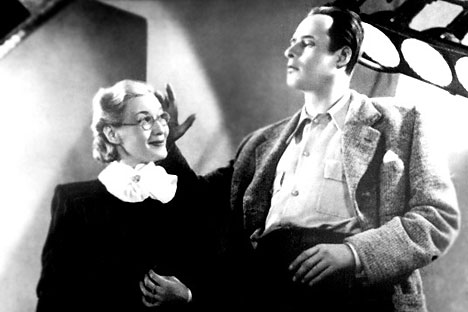 From silent classics to the the age of the auteur, the best Russian films of the past 100 years are now being showcased in Britain.

The British Film Institute (BFI) is showing an unprecedented retrospective of Russian and Soviet films featuring classic and contemporary movies spanning more than a century of cinema.

Billed as КiиО (the half-Russian name given to the project is pronounced Kino, meaning cinema in Russian), the six-month event is big and bold, say the organisers, and brings the best of the past and present to British screens.

“Kino is huge and epic in its scope, and it covers the whole spectrum, from classic icons of Russian heritage right the way through to contemporary films,” said the BFI’s director, Amanda Nevill.

In a three-year project, the organisers of КiиО have collected, restored and brought back to life not only the gems of Russian cinematography but also the best original versions of the pictures, from the classics of early silent movies to notable works from the age of the auteur.

The flagship of the project is one of the all-time classics - Sergei Eisenstein’s Battleship Potemkin (1925), which has particular resonance for its British fans: praised in Europe after its release , it was banned in Britain until 1954. “It seems the whole British Army would crumble like a house of cards just from the single word ‘Potemkin’,” critics wrote in the Twenties as they ridiculed the government’s decision to ban Eisenstein’s masterpiece.

The restored and digitalised version of the film has been released in eight British cinemas and art centres and is accompanied by the music Edmund Meisel played at its world premiere in Berlin in 1925. “It’s what we love doing here: we like to put things together that you couldn’t get anywhere else,” the BFI director enthused.

In 2005, the Berlin Film Festival premiered the film’s restored version, which featured lost footage and captions, in particular the censored words of Leon Trotsky in the prologue and out-takes from the scene on the Potemkin Steps in Odessa, one of the most iconic in film history.

In addition, the Pioneers of Russian Film series, which will run for the first two months of the season, will show little-known Soviet films of the Twenties and Thirties, including Third Meshchanskaya Street ( M é nage à Trois , 1927) by Abram Room and Viktor Shklovsky. Depicting the touching story of the experience of living together in Moscow during the New Economic Policy, the film was banned in Russia and Europe for its relatively risque content.

Moviegoers can also take in the subtle comedies of Boris Barnet, including the most popular film of the Twenties, The House on Trubnaya (1928), which portrays the difficulties of life in Moscow for people from the provinces.

There are also films from a pioneer of global documentaries, Dziga Vertov, including his avante-garde Man with a Movie Camera (1929), as well as less well-known work such as his first experiments with sound in film. Viewers will also be treated to a special showing of The Heir of Genghis Khan (1928) by Vsevolod Pudovkin with the original film score, and Mikhail Kalatozov’s Palme d’Or winning post-Second World War drama The Cranes Are Flying (1957).

The second part of the КiиО programme, titled “Cosmos”, is devoted to the conquest of space by Soviet film-makers, and includes remarkable film chronicles of man’s first space flights, including the Armenian director Artavazd Peleshyan’s documentary Our Century , the stark and challenging philosophical parables of Andrei Tarkovsky’s Stalker and Solaris , and Georgi Daneliya’s satirical sci-fi film Kin-Dza-Dza.

This ambitious Russian invasion of British cinema screens will conclude with the first retrospective in the United Kingdom of the films of  Alexander Sokurov – who turns 60 this summer and will come to London in November to introduce his works.

Another intriguing facet of the КiиО season is a DVD series, The Soviet Influence. Each disc in the series will consist of a Soviet film and a handful of renowned films which were influenced and inspired by the first movie.

Judging from the buzz on the South Bank in London, the organisers of the КiиО programme are proud of what they have achieved in putting together a wide-ranging tribute to Russian cinema.

“I think the BFI is probably the only place on the planet that could have the ambition to put together a film season with such scope as this,” said Ms Nevill.