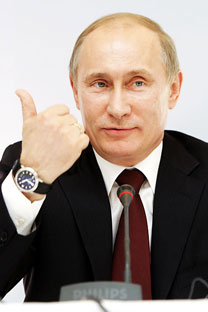 While President Dmitry Medvedev promotes his  hi-tech innovation centre at Skolkovo, Prime Minister Vladmir Putin has launched an agency which he says will complement its work.

In a move guaranteed to set tongues wagging about courting the voters and a supposed rivalry with the Russian president, Prime Minister Vladimir Putin has unveiled his own business initiative.

The Agency for Strategic Initiatives (ASI) was set up as a communications channel with medium-sized businesses and is expected to start work this summer.

But while he and President Dmitry Medvedev remain  silent about their intentions for the 2012 presidential race, Mr Putin warned against attempts to look for political implications in the creation of ASI as a counterbalance to the Skolkovo hi-tech hub  outside Moscow.

“There is no need to look for political motives. No one is going to step on anyone’s body parts,” he said in comments reported by the Itar-Tass agency. Amid plenty of buzz generated by the Skolkovo centre, the prime minister was also quick to dismiss comparisons or overlaps with the president’s pet project, saying that they would complement each other.

“This is something different. This means network activities across Russia,” he said when he presented the new agency at Government House on May 25.

But both entities will groom the work of innovation departments, facilitate the promotion of projects, and co- ordinate work through individual research and targeted programmes. So it is unclear how the agency can fail to partly duplicate the work carried out by Skolkovo.

The idea of ASI ostensibly arose after Mr Putin’s various trips around Russia, during which he talked to many entrepreneurs. Their stories merged into one continuous litany of grievances about the difficulties faced by Russian businesses struggling under the yoke of bureaucracy.

According to its architects, ASI will not seek to consolidate government programmes but will select the most promising projects in certain sectors. Citing the example of a federal programme for the development of the medical industry, Mr Putin said that was a typical situation where ASI could play a role in determining which projects needed support.

“Our market is dominated by foreign pharmaceutical companies” that earn billions of dollars in Russia, “while domestic products are scarce and can be found only in the low-priced segment, and there are only a few hi-tech products,” he said.

The agency will not be staffed by government personnel. The economic development minister Elvira Nabiullina, who will be on the supervisory board, will be the only exception, because her ministerial duties are seen as coinciding with many of the issues that the ASI will address. The director of the agency has yet to be appointed.

Thу oiginal version of this article was published in the Nezavisimaya Gazeta (translated by RIA Novosti).