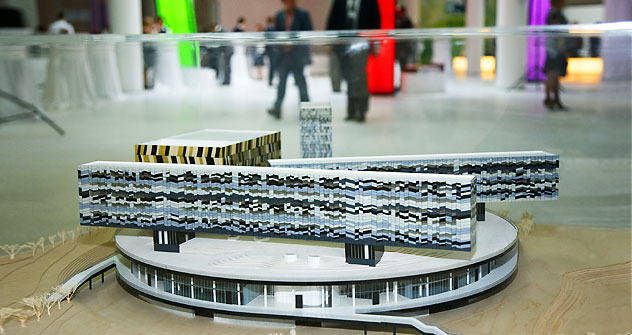 Derided as a pipe-dream by some but embraced by Russia’s leader as an engine of modernisation, there’s a new brand to watch out for that might loosely be called ‘made in Skolkovo’.

Twelve miles west of Moscow lies the bricks-and-mortar nucleus of a vision for a massive hi-tech leap, a Russian remastering of California’s Silicon Valley, exploding in a little village called Skolkovo.

“I hope that the whole world comes to know this brand, not only as the place investors should put their money, but because any big development undertaking needs to have its main engines that drive the whole process,” President Dmitry Medvedev said earlier this month when he brought more than 800 members of the global news media to Skolkovo for a question-and-answer session.

Eventually, more than 40,000 people will live and work on these 900 acres of land. Designated “Innograd” (a contraction of the Russian for “Innovation City”) it will concentrate a mass of Russian – and, if it takes off, multinational – high-technology companies.

Mr Medvedev gave the green light to the project in February 2010, and construction will take place within the framework of broader initiatives in the country. As the president told the national and foreign press at the May 18 meeting: “I don’t think we should look at modernisation within some firmly fixed time frame. I remember the time when we all counted how  one year had passed since perestroika began, then two or three more years, and we all know what happened in the end.”

For months, Skolkovo has mostly been a buzzword punctuating talk about the Kremlin’s modernisation programme. Apart from its newly opened Moscow School of Management, the site is largely still on the drawing board. But Russia is getting serious about spreading its wings, and moving away from the traditional role of global energy and raw material exporter to become a hi-tech development hub. And this is the flagship.

Mr Medvedev has visited Silicon Valley to see what might or might not work for his country. True, that region became the main United States technology centre largely through defence spending (chiefly aimed at the Soviet Union) in the Seventies and Eighties. But Russia’s version is in a different era, and Skolkovo is about making it work internationally. “This place holds special significance for me, because it is here that we are developing our new technology, here that we have established the Skolkovo university and the school [of management], and here that our innovation centre will be located,” the president said.

Beyond Mr Medvedev, there is a weighty line-up of names working to make the project a success. The former chief executive of Intel, Craig Barrett, and the Russian billionaire Viktor Vekselberg co-run the Foundation Council, which includes among its members the Lukoil president Vagit Alekperov, and Anatoly Chubais, CEO of the Russian Corporation of Nanotechnologies (Rusnano). Two nobel laureates in physics and chemistry, Zhores Alferov and Roger Kornberg, head the Skolkovo Scientific Council.

“Skolkovo will become the conductor of an orchestra consisting of start-ups and investors,” the foundation's vice-president Stanislav Naumov predicted in an interview with Russia Now .

But this is not an attempt to create a Soviet-style Utopia, paid for and run by the state. Although the state has lobbied heavily for the project, it’s exactly the government’s involvement that’s unwelcome here. Or at least any dependence on its financial participation. The state has provided two thirds of the amount at most, says Mr Naumov, emphasising that funds borrowed to meet the projected $1bn annual development price tag will be repaid in eight years at the most.

A driving premise behind Skolkovo is the need to marry innovation with education. The first batch of 40 young businesspeople graduated last year from the Moscow School of Management’s MBA course. With a focus on emerging markets, the class, which included students from India, Brazil and Canada, spent months honing practical skills on work placements that took them as far afield as Chinese factory towns. The Skolkovo Technical University is expected to start post-graduate admissions by 2014.

There are naturally some doubts and contradictions. surrounding the project. Even if Russian start-ups do gravitate towards Innograd and international scientists follow, investors cannot be taken for granted. Skolkovo’s current image is still too vague,  critics point out.

And, given that the odds are often stacked against bold visions at their time of inception , there is also a healthy, pragmatic concern from within. “Since 1990 there have been 980 attempts to create such centres of innovation, only 17 of which made it, and only three of these really measure up,” said Grigory Revzin , the respected  architecture specialist and t own planning board member. “Statistically, Skolkovo’s likelihood of going under is high. But nor is there any need to kill it off artificially.”

Just as Silicon Valley entered the public consciousness as an embodiment of pure innovative brilliance, so Skolkovo is looking to tap the imagination as it strives to become the brand of which the president speaks.

In one inventive, if slightly whimsical, step in the process, the foundation has hired the Russian-Kazakh director Timur Bekmambetov ( Night Watch , 2004) to produce  an animated television series based on stories by the Soviet science-fiction writer  Kir Bulychev. His protagonist, Alisa Seleznyova, will live in modern Skolkovo and will make scientific discoveries  together with her parents, Mr Naumov said.

However, back in the real world, the former Intel chief executive and Skolkovo participant Craig Barrett insists that “linking business and  research is Russia’s real chance of a technological leap forward.

“It’s necessary to be confident in the righteousness of one’s cause, even if stable guarantees are lacking,” he said.