The shadow of a MiG 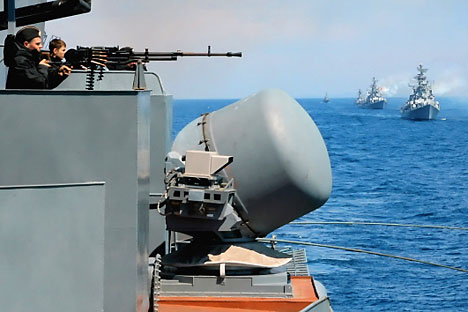 Russian-Indian relations have lately been overshadowed by the unexpected cancellation of bilateral training drills, Indra (Indo-Russian) 2011. On land and at sea.

In late April the Indian destroyers Delhi,Ranvir and Ranvijay arrived at Vladivostok for joint exercises with ships from Russia’s Pacific Fleet. The exercises were planned a year ago. But according to the Times of India, the Indian ships were not welcomed with open arms. No, all the proper customs on such an occasion were observed — the honor guard, the orchestra playing hymns and marches, the meetings with admirals and senior officers. Even so the exercises did not take place. The hosts excused themselves saying they did not have enough ships. Supposedly the ships had all been sent to Japan to help control the situation around the crippled nuclear power station at Fukushima.

Owing to the tragedy in Japan, which had already cost thousands of lives, and to complications to do with the Kuril Islands, to which Tokyo had responded sharply, the Russian admirals in Vladivostok had decided to calm the nerves of their southeastern neighbors and not irritate them by flying the Russian flag so close to the disputed territories. Instead of the planned naval exercises, the Russian admirals suggested trainings on maps and computers — so-called command-staff trainings.

This hardly persuasive, if not absurd explanation for the non-participation of Russian naval ships in the joint exercises became immediately obvious when the Indians learned that Pacific Fleet ships had in fact sailed out to sea and conducted trainings — only without their guests from the distant subcontinent. Then the question arose: why didn’t the Russian admirals warn their Indian colleagues about the change in plans ahead of time? One doesn’t treat friends and partners that way.

Naturally, all of this offended Delhi. The Indians were even more distressed when they discovered (though in plenty of time) that the land portion of the joint Indra 2011 exercises would also not take place. These exercises too had been planned a year ago: trainings equivalent to ones conducted in India. Again, there was no clear explanation from Moscow as to why the trainings had been cancelled.

Certain experts maintain that these actions on the part of Russia are a sort of response to the Indian government’s decision concerning the finalists in a tender to supply medium fighter aircraft. The Russian multipurpose MiG-35 had been a contender. Also taking part in this tender to deliver 126 jets for a sum in excess of $10 billion were the American F\A-18E\F Super Hornet made by Boeing and the F-16 Fating Falcon made by Lockheed Martin, the French Rafale manufactured by Dassault Aviation, the Swedish JAS-39 Grippen produced by SAAB and the European (Great Britain-Germany-Italy-Spain) Eurofighter EF-200 Typhoon.

After months of negotiations and familiarizations with the technologies at the various plants participating in the tender, of comparative trainings and tests of all the fighters in the sky over Indostan, Delhi chose only two aircraft: the French Rafale and the European Typhoon.

This choice, so they say, deeply offended Russian military and defense officials. Moreover, they learned that the Indian leadership had announced a tender to supply spare parts, radars and missiles to repair, modernize and militarize planes bought earlier from the USSR and later from Russia. In Moscow the consensus was and is that since Soviet/Russian planes are part of India’s Air Force, there can be no tender — supplies of spare parts and components should be delivered by Russia. Especially since Moscow has not transferred the intellectual property rights for building and arming the MiG and Sukhoy jet fighters sold to India earlier. Of course, there are flaws in the servicing of these Russian-made planes, but they need to be overcome; their existence does not mean that the time has come to stop all cooperation with the producers.

Then again, Russian-Indian military-technical collaborations have never been cloudless. One recalls the reconstruction of the aircraft carrier Gorshkov/ Vikramaditya, which was delayed for several years because the original price stated in the contract in no way corresponded to the amount of work done on the ship. Also not forgotten are the problems with the delivery of Talwar class frigates, with the modernization of Il-38 spy planes, and with other projects, including air-to-air missiles for multipurpose Su-30MKI jet fighters. But the contract for these fighters was a model of cooperation, like that for T-90C tanks, for the supersonic anti-ship BraMos missile, for a fifth generation jet fighter and other promising projects.

There are problems, but there always are — that’s life. India is not putting all its eggs in one basket. It is trying to diversify its military purchases, to buy not only military technology but also licenses to produce that technology in India, so as not to depend on anyone in a crisis. And that is sensible.

To take offense because you were not chosen is, of course, possible. This often happens with marriageable brides. But one needs to be able to endure those unpleasant moments in life. One needs to find the energy to go on. A contract that does not go through is not the end of the world. There are many other contracts under the sun, and much more work to be done.

Unfortunately, not all the people making these decisions realize this. Sometimes they are governed by their emotions in the moment. But those emotions will pass.

Still, there is something more nervous-making than the cancellation of the joint Indra 2011 exercises. A year ago Russian President Dmitry Medvedev met with Pakistani President Asif Ali Zardari in Tashkent. A few months later they met again in Sochi, and recently for a third time in Moscow. The Kremlin press service reported that the two leaders “discussed regional security matters and the prospects for bilateral cooperation”. In what area the two sides planned to cooperate was not mentioned. One should bear in mind that up until then Moscow and Islamabad had no military-technical ties. Primarily because Delhi was opposed. But the Kremlin has greatly valued the steadily increasing export of military technology to the Indostan Peninsula. Now, after the failure of our MiG-35 in the Indian tender to supply multipurpose jet fighters, some shifts may be in store. But so far there is no hard evidence to prove this.

However, according to an officer of one of the Russian power structures, the most likely and obvious reason why the Navy drills were cancelled - organizational. In April, process of shifting Russian Navy headquarters from Moscow to St. Petersburg started,  also restructuring is going on in the Defense Ministry departments, engaged in international cooperation.