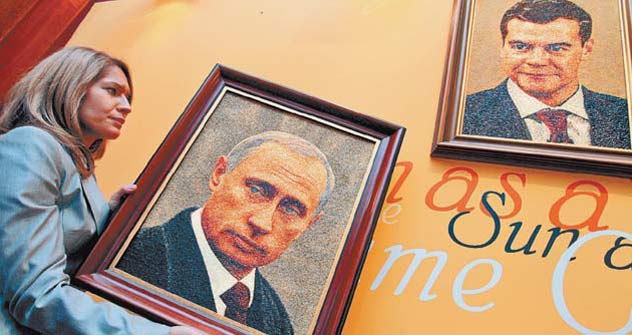 Picture of uncertainty: Who's next in the Kremlin hot seat? Source: AFP/East News

Appearances by Dmitry Medvedev and Vladimir Putin suggest the election season has begun. But their actions seem designed to keep voters and pundits guessing.

Slowly but surely, the 2011-12 election season in Russia is getting under way. In recent weeks, both President Dmitry Medvedev and Prime Minister Vladimir Putin have made appearances that pundits regard as the beginnings of an election campaign, and analysts are watching closely to determine whether the Tandem will remain in place after March 2012.

On May 6, during a congress of the ruling United Russia party, Mr Putin announced the creation of the All-Russia Popular Front. This organisation will be made up of trade unions, business associations, youth groups and Kremlin-friendly NGOs and is intended to improve United Russia’s popularity by giving it more of a connection to ordinary people.

The new organisation will include “everyone who is united in their common desire to strengthen our country, united by the idea of finding optimal solutions to the challenges before us,” Mr Putin said.

President Medvedev immediately gave the pundits reason to speculate that there was discord between the Kremlin and the White House when he declined to endorse the concept of the Popular Front, saying in an interview only that he understood the reasons behind the move.

“I understand the motives of a party that wants to keep its influence over the country. Such an alliance is in accordance with the law and justified from an electioneering point of view,” he said in televised comments.

Mr Medvedev also speculated that United Russia could not count on a landslide in December’s State Duma elections, saying that competition was vital in a democracy. “No one political force can regard itself as a dominant one, but any force should strive for maximum success,” he said.

The president promoted his own agenda during a lengthy press conference at the Skolkovo Innovation Centre on May 18. Answering questions from an audience of more than 800 journalists, Mr Medvedev commented on topics ranging from modernisation to gubernatorial elections to missile defence. His responses were mostly predictable, but the conference showed him to be comfortable, confident and in command of the issues – a man who could head a successful presidential campaign.

The press conference followed a meeting on May 10 with judicial officials in which the president again pressed for judicial reforms and a strengthening of the court system, and a spring marked by a controversial plan to remove government bureaucrats from the boards of state-owned companies.

Some analysts see Mr Medvedev’s actions as more proof that he is further distancing himself from Vladimir Putin. A process that began with his criticism of the prime minister’s comments on the prison sentences of Mikhail Khodorkovsky and Platon Lebedev, continued with the leadership’s difference of opinion over Nato intervention in Libya, and expanded with the shake-up in corporate boardrooms.

“This is a major development, marking an independent move by Medvedev, touching the interests of influential members of Putin’s team,” said analyst Dmitry Oreshkin, discussing the new policies with Bloomberg.

The theme of the president’s autonomy was noted in his reaction to the formation of Mr Putin’s Popular Front. “Medvedev is trying to demonstrate his independence with those remarks,” Alexei Makarkin, a political analyst with the Centre for Political Technologies, said in an interview with The Moscow Times . “And it looks like the number of similar remarks will be growing soon.”

The political scientist Grigory Golosov said: “If they [establish this new grouping], and there is no reason to think they won’t, then we can say that Vladimir Putin will be nominated precisely by this ‘popular front’ – that is, by all Russians who are for a better life.”

Alexander Venediktov of the radio station Ekho Moskvy agreed. “This story shows us again that Vladimir Vladimirovich [Putin] certainly has not said ‘No’ to a third presidential term,” he told the BBC.

Those who believe the Tandem will continue past 2012 say that the recent appearances have given both politicians the opportunity to define their different but complementary personas – Mr Medvedev the “modernist” and Mr Putin the “traditionalist” – in the hope that one or the other will appeal to Russia’s increasingly divided voting population.

“Like before, Putin and Medvedev tend to occupy different political niches,” the independent political analyst Stanislav Belkovsky told  Interfax. “But both men continue to serve their common cause.”

The opposition politician Vladimir Ryzhkov even suggested that the Popular Front initiative was in fact intended to shore up the Tandem. “He [Putin] is attempting to halt rapidly eroding support for the ruling Tandem and the ‘party of power’,” Mr Ryzhkov wrote in an editorial in The Moscow Times .

The television analyst Nikolay Svanidze echoed these comments. “All this doesn’t necessarily mean it is Putin who will stand for president next year. I believe the Tandem has not yet made a final decision regarding who is going to run. If such a front is formed, the current president, Dmitry Medvedev, may use it just as easily. The new platform will make it possible for either of the two candidates to declare that he is backed by a considerable part of the people, not just one party and its voters,” he told Russia Today TV.

Any candidate for the Russian presidency in 2012 may have to pay more attention to the people than previously planned. According to an Levada Centre poll in April, 75pc of Russians are interested in politics. But 83pc of respondents believe that politicians work only to promote their own interests and ignore the needs of voters.