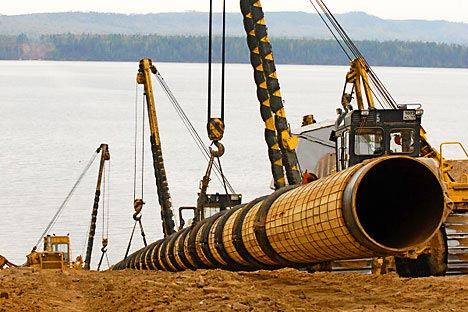 Russia and China set aside their differences in pursuit of greater economic goals.

After a protracted spat that threatened to undermine otherwise booming trade relations between Russia and its southern neighbor China, business-like pragmatism prevailed this week over pesky payment problems. Over the past several months, Moscow and Beijing were locked in a dispute over oil pricing and overdue payments. Analysts say that China, the world’s number one energy consumer, is set for heady growth in the coming years, and could therefore least afford a costly trade dispute with its northern neighbor.

At issue is a loan-for-oil agreement inked in February of 2009, in which Rosneft and Transneft agreed to start shipping an annual 15 million metric tons of oil through the Eastern Siberia–Pacific Ocean (ESPO) oil pipeline, which is designed to pump crude from Siberia to Russia's Far East and then on to energy-hungry China and the Asia-Pacific region. Rosneft and Transneft borrowed an unprecedented $25 billion from China to build the pipeline as part of a broader deal to supply Beijing with 300 million tons of crude over 30 years. But since the agreement became effective early this year, China has been pressuring Russia to revise the pricing formula for its crude oil supplies. Beijing says it wants to purchase oil at a price lower than that offered at the ESPO’s Pacific Ocean terminus of Kozmino, arguing that the distance from Skovorodino, where the spur to China branches off from ESPO, to Kozmino, is 2,046 kilometers, but it’s just 60 kilometers from  Skovorodino to the Chinese border. Russia insists, however, that it applies similar tariffs to both routes and urges China to pay the ESPO’s terminus’s price at least for the first year. In April, Transneft said it had incurred a loss of more than $20 million a month due to underpayment by China for crude oil supplied via ESPO.

The spat has had chilling effects on otherwise booming and mutually beneficial trade relations between the two nations. Since March, when news of the alleged underpayments first emerged, the dispute has escalated so much so that in April Transneft threatened to file a lawsuit against China's CNPC in a London arbitration court over what it said were underpayments for oil supplies. Suddenly this week China paid out about three-fourths of a debt owed to Russian state-controlled companies for oil deliveries. “China has started to pay up its outstanding arrears for our oil,” Transneft Spokesman Igor Demyon said. “Transneft received $33 million transferred on Monday and another $45 million on Tuesday.” Rosneft has also received $127 million from China this week, he said. However, China still pays less than the agreed sum on the oil shipments it received this year through the East Siberia-Pacific Ocean pipeline, Demyon said.

Some analysts said China’s decision to start paying off its debt shows that it may have caved in to the legal pressure. "Obviously, the legal position of Russian companies was stronger, and the Chinese chose to start paying off their debt,” said Denis Borisov, an oil analyst at Bank of Moscow.  “Like Russia, China is very much interested in expanding energy cooperation with Russia, especially in the gas sector, and therefore has incentives to make concessions." But other experts have suggested that the two may be playing shrewd political games, as they both try to save face ahead of a crucial summit next month. “Transneft’s threat to litigate is just that – a threat,” said Troika Dialog oil industry Analyst Valery Nesterov. “There is too much at stake for both nations to allow court cases to interfere in other potential trade deals.”

One potential victim of a protracted spat is a fresh landmark deal with China on natural gas supplies, which Russia has been trying to secure. For months, Russian gas monopoly Gazprom has been making futile attempts to clinch a gas deal with China, which it needed so badly to diversify its exports away from saturated European gas markets. Negotiations were stalemated, analysts say, by the wide gap in the price demanded by Moscow and the one Beijing was willing to pay. Deputy Prime Minister Igor Sechin said that Russia hopes to finalize a gas supply deal with China by June 10 to export 68 billion cubic meters per year for 30 years. Under a draft accord discussed at bilateral energy talks, Russia would supply 30 billion cubic meters per year of gas through a western route from Siberia into northwest China, and a further 38 billion cubic meters down its Pacific coast into the Chinese northeast, he said. The launch of gas exports to China would break Russia's almost complete export dependency on the European market, to which gas export monopoly Gazprom expects to export more than 150 billion cubic meters this year, Reuters reported.

Sechin, who was speaking after meeting his Chinese counterpart Wang Qishan, said final agreement had not yet been reached on price, but the two sides had tasked their state energy firms, Gazprom and CNPC, with finalizing terms. "We have asked Gazprom and CNPC to finish talks and prepare a package of contracts for signing before June 10," Sechin said. That would enable a deal to be finalized before a visit to Russia by President Hu Jintao, who will be the guest of honor at the St. Petersburg International Economic Forum on June 16 to 18, Sechin added. Prime Minister Vladimir Putin's Spokesman Dmitry Peskov confirmed to Russia Profile that both sides are working hard to formulate transparent guidelines for approving gas pricing formula for a possible deal in June.

In an about-turn last week, China called off talks with Russia scheduled for May 30 to 31 to iron out disputes over the price of Russian oil and gas deliveries to China, despite earlier statements by Sechin that Moscow and Beijing would discuss the price of pipeline crude deliveries at an energy dialogue later in May. But in a sign of things to come, PetroChina Chairman Jiang Jiemin said at a May 19 briefing in Beijing that both countries have almost completed technical and commercial talks on a gas supply contract, implying that Beijing may no longer insist on changing the rules in the middle of the game.

But while the ever-rising oil and gas prices, spurred by the Fukushima nuclear accident and upheavals in the Middle East, put Russia in a much stronger position at the bargaining table with China, there has been a studied effort on both sides to avoid explosive conflicts, analysts say. Nesterov said the latest developments show that Moscow and Beijing have only been able to achieve major breakthrough under intense political pressure. "Neither side needs a conflict, however trivial, ahead of Chinese President Hu Jintao's visit in June," Nesterov said. “Some issues are still outstanding, but both sides have decided that they are negligible.”