Counting by millions and billions 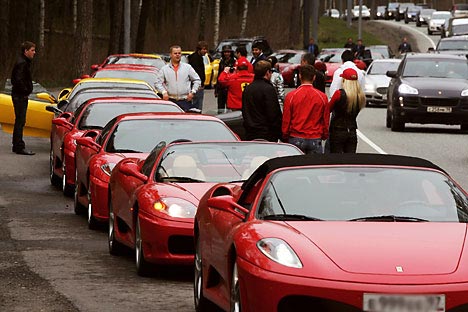 Russia may be the best place to live if you want to be a billionaire. For those with lower ambitions, the picture is less promising

The number of millionaire households in Russia is rather modest for a country with record numbers of billionaires, according to a new report by Boston Consulting Group (BCG).

In BCG's Global Wealth 2011 report on global financial flows and the world's richest households, Russia ranks among the top five countries by the number of super-rich families: 561 households have assets in excess of $100 million. The United States tops the list with 2,692 such households, followed by Germany, Saudi Arabia and Britain.

On the other hand, Russia failed to make it into the top 15 countries when a per capita view is taken. Moreover, the report revealed a shortage of "common" millionaires in Russia – that is, those with $1 million or more in investible assets.
Counting in millions and billions

At 5.2 million, the United States tops the list of countries with most millionaire households, while Singapore has the highest proportion of millionaires, at 15.5 percent of the population. Russia is not in the top 15 in either of those rankings.

"Russia is unique because 2%-2.5% of the population control 70%-80% of all assets," said Alexander Rubinstein, director of the Institute for Social Economy at the Russian Academy of Sciences. He does not think this should threaten political stability unless "billionaires parade their wealth and annoy people."

Predictably, most of the wealth is concentrated in Moscow. On the upside, as a result, wealth inequality is negligible outside the capital. On the other hand, this dearth of millionaires strips Russia of the benefits a rich country would normally enjoy - well-developed markets and technology.

Vyacheslav Bobkov, head of the National Living Standards Center, said Russian millionaires are probably those who have built up a successful business in a competitive environment, while billionaires are mostly living off the country's mineral resources, rental incomes or monopolies.

The BCG report also concentrates on international millionaires' preferences in using offshore financial centers. It appears that Russian capital accounts for less than 5 percent of "external" assets in Switzerland, Luxembourg, Britain, Hong Kong, Singapore and the Caribbean Islands. The only low tax haven where the Russian contingent rose to 8 percent in 2010 was Dubai. Curiously, this is not confirmed by any official reports.

Investment in property, the main asset in Dubai, may even be more popular with Russian billionaires than is officially believed. One reason for this discrepancy may be the corrupt origin of the funds invested in UAE development projects.

According to BCG, Cyprus remains a "transit" zone for Russian capital; the island has not grown into an important global wealth-accumulation center.

The Bank of Russia's inventory of the destinations for Russian capital outflow ahead of the elections broadly confirms BCG's estimates: most financial transactions performed by corporations controlled by super-rich Russians involve Britain and Switzerland, followed by Luxembourg and Germany.

Russia may not be the richest large economy, or the fastest growing large economy, or Europe's largest economy, or even the economy that hosts the world's financial centre, but it is pretty clearly the best place to be if you want to become a billionaire.

The rate of return on investment in Russia is among the highest in the world – for the well-connected or the aggressive risk-taker, that is. It has been the large economy in which the chance of becoming a billionaire has been the highest over the last 15 years.

"After all, there certainly weren't any billionaires in Russia in 1991 when the Soviet Union was dissolved, and probably none until 1994 when the first businessmen began to secure control over privatized property. But since then, Russia has been churning out billionaires by the dozen every year; today, there are 101 according to Forbes and no sign of the number slowing down anytime soon," said Jacob Nell, an analyst with Morgan Stanley in Moscow who compiled the table below.

China, the darling of the emerging markets, doesn't do half as well, producing one billionaire for every 11.7 million people in the last 15 years, while in Germany, the man in the street had no chance of becoming a billionaire at all, as the overall number of billionaires has remained stuck at 52 since 2004.