The brighter side of Nationalism 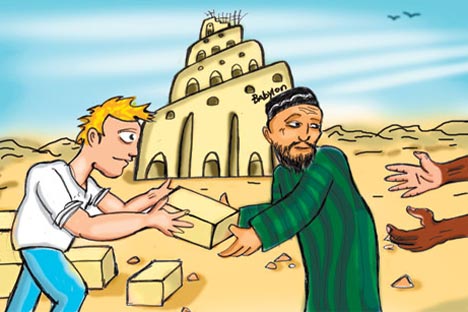 Readers hardly need to be reminded of how “bad” nationalists are supposed to be: an aggressive crowd clamouring against the presence in their country of people of a different ethnicity, faith, or skin colour is the conventional image of this social phenomenon perpetuated by the mass media.

But how do good nationalists look? Do they even exist at all, or is this phenomenon doomed to exist forever with only a negative aura?

The Russian press, and the European press too, constantly carry stories of attacks on immigrants. The notorious phrase, “Here they come,” ever popular among the angry citizens of major Russian metropolitan areas, is clear evidence of permanently rising tensions in society regarding all kinds of newcomers. That said, many nationalistic incidents have nothing at all to do with the arrival of “aliens” in Russia – ie, citizens of former Soviet republics who come here in search of jobs.

According to the statistics, just as many nationalism- related conflicts occur between Russian citizens of different ethnic backgrounds. Many Russian politicians consider the latter to be the most disturbing development. The conflict between so-called native Russians, mostly perceived by public opinion to be residents of European Russia, regardless of their affiliation with a particular national republic, and people from Russia’s North Caucasus, has risen to the forefront of attention at the highest political level.

This happened several months ago when the police illegally freed a murder suspect, formerly from that area, hours after detaining him. This sparked a mass riot among football fans from whose ranks the victim came. The fans staged an unsanctioned rally under nationalist slogans at Manezh Square in Moscow. The country’s leaders had to intervene to ensure the suspect was rearrested and the case against him prosecuted.

In many cases, unrest is caused not so much by an abstract hatred that Russians supposedly feel towards people of other ethnicities as by an understandable indignation at social inequality, corruption, or lack of trust in the justice system. The implications of such reactions are disquieting, and not only for Russia. The abandonment of multiculturalist policies by a number of European countries and a serious upsurge in ratings of not just national but also of far-right nationalist parties has threatened the United Europe project from within. In fact, restoring erstwhile borders fully or partly, banning new immigrants from entry, and expelling those who are already in residence are all measures being contemplated. Judging by local election results, a considerable portion of Europeans are no longer happy with life in different ethnic and cultural “tents” under one roof in a single European home.

Certain commentators believe that the further growth of nationalist sentiment will inevitably lead to radicalisation, not only of the right, but also of the left wing of the European political spectrum – ie bringing about parties that oppose nationalists. This will gradually squeeze moderate political parties out of power in Europe.

But is it even possible to confront nationalism in a democracy, given the obvious appeal and often sophistication of this ideology?

A number of Russians believe that the Soviet experience of promoting “friendship among peoples” at the state level can be drawn upon to fight nationalist tendencies. Those programmes were well funded and the policy of cadre rotation between representatives of various ethnic groups within the country was a normal practice.

At the same time, the state, emboldened by its ideological monopoly, suppressed any unauthorised manifestations, chiefly those of ethnic nationalism in the republics. Admittedly, friendship among peoples didn’t stop the USSR from breaking up along ethnic lines, the implication being that this experience cannot serve as a benchmark for modern states.

That said, many Russians are still unprepared to paint nationalism exclusively black as a cultural and social phenomenon. They believe the threat comes from interpretations that are capable of generating xenophobic feelings of a religious, or racial nature. Provided such pathologies are promptly nipped in the bud, moderate nationalism should remain part of any political system.

Russian researchers consider such nationalism to espouse an entire nation’s right to political self-determination, as opposed to just a part of any nation, and believe that such sentiments shape a society’s skills as a civilisation.

Fear of any manifestations of nationalism is driving this phenomenon underground. It is also very quickly forming gangs of radical thugs who by their aggressive actions are forcing the subject of “legitimate” nationalism that exists for the benefit of the state to the margins of mainstream politics.