A “sweep” operation for the homeless 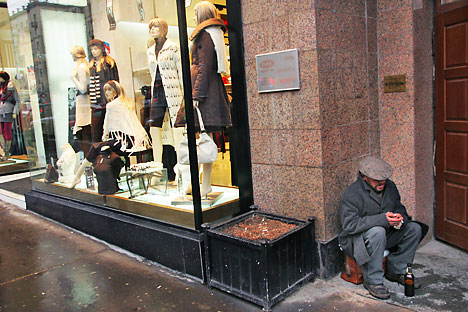 The Ministry of the Interior deems it necessary to create a network of public centers for the homeless.

Special patrols deliver the homeless to social hotels, bathhouses, and hospitals. This original method of protecting citizens from close and frequent interaction with the homeless has been applied by the police. Though time-consuming and often thankless, this method is humane.

A fundamental legislative recipe of how to get rid of the homeless, alas, does not exist. But there is an opportunity to minimize interaction with them on public transport and in other public places, as well as reducing the risk of getting infected by these people.

Nikolay Ivanov, chief of the Moscow Metro police, told Rossiyskaya Gazeta (RG) that the Moscow subway police, together with the social patrol, daily “round up” up to 200 homeless people on their premises. They are not detained or arrested, but taken to bathhouses and hospitals, and even social hostels, such as in Lyublino, for example. They are given clean clothes and food. After getting medical assistance and being thoroughly “fumigated”, or cleansed of all insects from their bodies and clothes, the poor souls are released. Some return to their den, and already two weeks or so later go back to being covered in dirt and lice.

Meanwhile, some will try to grab on to the chance of being rescued and return to normal life – because all of the beggars are offered a chance, albeit small, to find some temporary job.

Each month, Nikolay Ivanov prepares a summary statement on how many people were delivered and where, and what assistance was provided. In the end, these documents end up on the table of the Moscow Mayor, Sergey Sobyanin. According to Nikolay Ivanov, about 4,000 people a month become the “clients” of the subway police and social patrol officers.

On a daily basis, there are no more than 300 homeless in the Moscow subway. As someone who uses the subway on a regular basis, I can confirm that unpleasant meetings with bad-smelling passengers have become much more infrequent.

And yet, what is to be done with those whose presence literally poisons the life of those around them? What is to be done about the presence – on the subway, electric trains or buses – of those who have long lost human form, similar to being in a gas attack? And if we consider that many homeless people have tuberculosis and surely head lice, then the danger is evident for all of us.

Ministry of Interior (MOI) analysts believe that a solution to the problem is, to put it mildly, long overdue, and that the matter calls for an immediate legislative decision. The government is obliged to protect normal citizens from the dubious pleasure of rubbing shoulders with beggars. But a policeman can, essentially, only temporarily detain a homeless person and then he must let him go. Perhaps the article prescribing punishment for vagrancy should be re-instated in the Criminal Code?

Attempts to revive this article have already been made by the Moscow City Duma and the State Duma. They failed for a fairly objective reason: deputies had rightly felt that the problem of homelessness cannot be resolved through punishment alone. Generally, MOI representatives agree. However, they are not suggesting catching and arresting all beggars indiscriminately.

First and foremost, it is being proposed that the status of a person with no place of residence by law is confirmed. Otherwise, it is impossible to so much as count these people. How many of them are there? We know there are about approximately 300,000 – and that is just those brought to police departments and included in police reports. In the MOI, representatives believe that there are 4.5 million homeless persons in Russia, including about 100,000 homeless living in Moscow.

Counting and officially registering all beggars is necessary not so they can be immediately jailed. It is important to understand why a specific person has found himself living on the streets. Criminal psychologists are confident that only 7% are homeless due to “ideological beliefs”. They, indeed, need to be isolated from society. Others, on the other hand, should be helped.

Who is a modern beggar? MOI statistics show that almost half of all homeless persons are ex-cons who under the old Soviet laws were discharged from housing due to their arrest. Today this law under which a person loses housing if assigned a guilty verdict by the court is no longer in effect. But affected persons remain. Not many were able to win back in court their square footage after returning from “the zone”. Former prisoners continue to join the ranks of the homeless today. Annually about 250,000 persons are released from jail.

About 20% of beggars are victims of criminal privatization. But their number continues to fall as it is becoming increasingly harder for “black market realtors” to illegally deprive people of housing. Another 10% have left their homes for family-related reasons: such as divorce or a quarrel with relatives. They left everything and went to build their lives from scratch. But they failed and could not return as their relatives did not allow them back. Most of the homeless – some 90% – are men.

Others found themselves destitute for various reasons. Some had simply lost their house to drinking or due to high debt. And some simply like living this way. However, this existence can hardly be called a life. Each winter, in Moscow alone, about 200 homeless people freeze to death. They earn money for bread mainly by begging, collecting bottles and scrap metal and petty theft. They show no disdain for selling drugs.

Those who live at train stations and dumps have developed their own hierarchy. A share of the profits from begging must be paid to the leader. Otherwise, they will be kicked out form their lucrative spot. As a result, the upper echelon earns a pretty good profit and can even afford to buy expensive alcohol. As for the homeless that live at the dumps, they manage a fairly good business themselves by selling “recyclables”. It was rumored that one such beggar had earned a million. They build huts, and even get married and have babies.

Neither the police nor healthcare professionals are interested in these people. Only the most outrageous crimes are investigated, and only those that have been committed against law-abiding citizens. What happens inside the homeless hovels, who murders or rapes whom is treated as their inside business. Nor will anyone agree to provide serious medical treatment to a beggar, unless he has a passport and medical insurance. Emergency service technicians are perhaps the only ones who will provide aid, and then return the homeless person back to the park bench. Therefore, beggars are not afraid of jail – at least there, they will be cleaned and fed.

Is it possible to return beggars to normal life? MOI representatives believe that we should at least try. Half of all homeless people have a high school diploma, 20% have specialized secondary education, and about10% have higher education. The MOI talks about the need for preventive measures. We need to create public rehabilitation centers to give these people a chance.