No more ambiguity around Vikramaditya 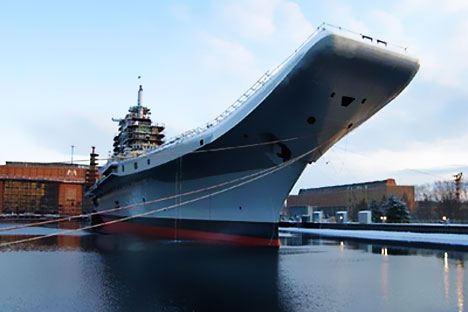 “During the talks we discussed military-technical cooperation in detail and went over the [upgrading of] the Admiral Gorshkov and the schedule [of works]. We have no questions, and nor does the Indian side,” Patrushev said.

He noted that “no unsolvable questions arose” during the discussion of military-technical cooperation. “There are questions that need to be discussed and that need support,” he added. Patrushev admitted, “Acute questions did arise in the past and required the leaders of the two countries to interfere… now everything is solved in the routine way.”

An additional contract for repair and upgrading of the heavy aircraft carrier Admiral Gorshkov was signed in March 2010 during Prime Minister Vladimir Putin's visit to India.
The document allows the two countries to reach mutually acceptable agreements on this issue.

A year before that, Indian Defence Minister Pallam Raju said his country had agreed to negotiate for a revised sum of the contract. Under a packet inter-governmental agreement signed in New Delhi in January 2004, the body of the Admiral Gorshkov was transferred to India for free subject to its upgrading at Sevmash and armament with Russian aircraft. Russia will also train the Indian crew of about 1,500 and create an infrastructure for the ship in the Indian Ocean.

The overall cost of the contract was estimated at 1.5 billion U.S. dollars, of which about 974 million U.S. dollars were intended for the conversion of the ship into a full-scale aircraft carrier. All work was supposed to be completed in 2008. However the completion date has been postponed. Russia claimed that the volume of work had been underestimated and demanded an additional payment of 2.2 billion U.S. dollars.

According to the Sevmash shipyard, the Vikramaditya (Powerful) is about 50 percent completed. If financing is provided regularly, Sevmash plans to complete work and begin testing at sea in 2011. The ship has to be handed over to the Indian Navy at the end of 2012. It is designed to operate for 30 years.

The Admiral Gorshkov was built in Nikolayev under the name of Baku and put to service in the Northern Fleet in 1987. It is 283 metres long, 51 metres wide, with water displacement of over 45,000 tonnes.

Russian President Dmitry Medvedev called for completing the modernisation of the aircraft carrier Admiral Gorshkov for India's Navy. When visiting the Sevmash shipyard in July 2009, he asked its management detailed questions about the status of the project.

The Gorshkov project has turned into the only problem in Russian-Indian relations, the president said. “We should view it as the first and very difficult experience,” he said, adding, “It should be completed and commissioned. Otherwise, this will have bad consequences,” he warned.

Medvedev severely criticised all parties involved in the project and regretted that the Russian side had assumed certain obligations during talks with Indian colleagues. "Why did you sign up for this? As a result we all have to make excuses: you to me, and I to our Indian colleagues," the president said.

Sevmash Director-General Nikolai Kalistratov said after the examination of the ship's mechanisms and units that its modernisation happened to be much more expensive than was initially expected. “All equipment had to be changed. And the price rose considerably,” he said.

Kalistratov said the shipyard would complete the project by all means. “We have already made all the decisions and preparations for the testing,” he said, adding that the ship would be tested by the Russian side first and then Indian colleagues would join in.

Transfer and acceptance tests are scheduled for 2012.

Sevmash is the only shipyard in Russia that builds nuclear submarines for the Navy. It employs over 25,000 people. Since its creation in 1939, Sevmash has built 45 surface ships and 163 submarines, including 128 nuclear-powered ones.

Sevmash has been reorganised into a joint stock company and will join the Northern Shipbuilding and Ship Repair Centre, one of the three holdings within the United Shipbuilding Corporation, the creation of which should be completed in 2009.