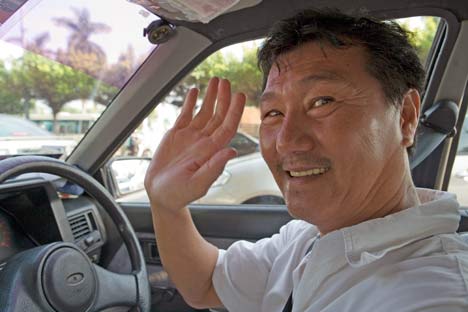 From the streets and markets to the steel high rise, Central Asians help keep Russia’s urban centers whirring and the demographics from further decline. But new immigrants also face hostility and xenophobia.

Grab one of Moscow’s ubiquitous gypsy cabs and there is a good chance the driver will be a young Central Asian, maybe a Moldovan, who is completely new to the city and has to be shown the route to Red Square or just about anywhere else.

Migrants from former Soviet republics, who do not need visas, have rushed in the millions to find work in Russia, both legal and illegal, and Russian companies have been quick to use the cheap labor.

The Federal Migration Service (FMS) estimates that about 1.7 million foreigners will enter Russia to work legally in 2011, and that there at least another three or four million working in the country are undocumented.

It is not difficult to find many of these new immigrants. They are the young men who sweep away the snow and pick up the garbage, and the hard-hats who build the city’s new glass and steel high-rises. They are the young women who sell produce in the markets, clean public toilets and street underpasses, and push strollers in city parks.

Bakhyd Asilbekulu, 21, came from Osh, Kyyrgyzstan, to work as a cleaner in a Moscow market for 15,000 rubles, or about $540, a month. He shares a room in a hostel near the market with more than a dozen of his compatriots. Bakhyd, who has Russified his name to Borya, plans to return to Kyrgyzstan in December but "if there is no money, I will return [to Moscow]."

Emigration from the former Soviet republics, and especially from Central Asia, is driven by poverty at home and the attraction of a booming Russia where the demand for cheap labor, particularly in major cities such as Moscow, is robust.

Russia’s need for workers is not likely to abate anytime soon. The country’s population—currently about 143 million--could shrink by as much as 40 million by 2050, according to demographers.

By 2030, the Russian economy will need another 30 million immigrants, according to Vyacheslav Postavnin, a former deputy director of the Federal Migration Service and chairman of the Migration XX1 Century Fund, an advocacy group.

“If there were no migrants then a square meter [of real estate] would cost three times more, roads twice as much,” said Postavnin at a press conference in May. “Ten per cent of GDP is [generated by] migrants.”

The FMS announced earlier this year that it plans to ease the immigration process, increase the number of legal residents it allows, and clear the path to citizenship for those who want to make their home in Russia. Konstantin Romodanovsky, head of the migration agency, also said that he wants to root out corruption, which often forces emigrants to pay bribes as they attempt to navigate the bureaucracy and legalize their status.

"It is difficult to move up each step without needing to pay a bribe," said Gafova.

One measure under consideration is the opening of a passport-visa service at Moscow’s Kazansky station where trains from Central Asia arrive. In a hassle-free environment, immigrants can immediately get the permits they need.

President Dmitry Medvedev changed the country’s visa regulations last year to allow highly qualified specialists and their families to come to Russia more easily. Even with that measure, officials estimate that the country will attract only about half of the skilled emigrants it needs.

Grafova said the government's current push for a more liberal immigration policy has in part been sparked by inter-ethnic strife, and a desire to counter a growing and sometimes murderous xenophobia that has been directed at emigrants.

Despite the country’s demographic crisis, there is widespread ambivalence about a more liberal immigration policy. Eight-six percent of Muscovites said the state should institute strict controls on immigration, but at the same time 57 percent of respondents said the city needs workers from abroad, according to a survey by the Politex agency.

Olga Kirsanova, a 52-year-old cleaner in a Moscow hotel, espouses a fairly typical hostility. "Crime goes up and they take all the jobs," she said. "You can't really close [the borders] but you need to restrict."

According to migration experts, Russia does little in the way of public education to foster tolerance. Nor does the state provide enough programs to help immigrants to integrate; recommendations include free language classes as well as instruction focusing on Russia’s culture and laws.

"There are a few efforts but they are very weak," said Alexander Verkhovsky, who studies assaults on migrant workers at the SOVA Center for Information and Analysis, a non-governmental organization based in Moscow. Attacks on immigrants are still common, Verkhovsky said, but the number of killings has been reduced after the police secured murder convictions against the members of a number of racist gangs.

Verkhovsky and others said that new immigrants are often exploited by employers; they need to be educated on their rights without fear of retribution from the authorities.

Abror, from Uzbekistan, declined to give his full name since his current work status is unclear. He worked in construction in Moscow for three years and saved up to buy a car. He said he was cheated out of his wages a few times, however. He wised up, he said, and now drives an unlicensed taxi, or gypsy cab, in Moscow. Now fairly fluent in Russian, he recalled his earliest days.

“When I first started, I only knew ‘left,’ ‘right’ and ‘straight’ in Russian,” he said. Abror is now almost fluent in Russian, adding proudly, “I learned to speak Russian from all the people I drive.”