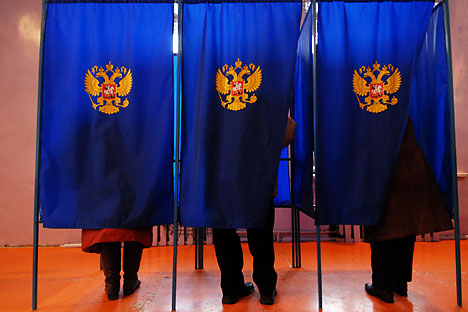 Six months ahead of Russia’s next parliamentary elections, the configuration of political parties looks roughly like this:

The country continues to have two political parties about which there is no speculation.

The Communist Party, headed by Gennady Zyuganov, can count on winning approximately 15 percent of the vote. Senior citizens make up the traditional electorate of this party, and even though the number of them with kind words about the Soviet Union is rapidly declining, the Communist Party continues to take its standard share of the vote. The departing pensioners are being replaced by middle-aged and younger voters who see a vote for the Communists as a protest vote. Although the number of Russians who are put out with the ruling elite continues to increase, the number of them who throw their votes in with the Communists is unlikely to rise much further. This is primarily because Zyuganov himself has clearly become obsolete. He makes too many compromises to hold on to the protest electorate, and has not come up with any new ideas in a long time. The Communist Party has stagnated, and no regeneration is expected in this election cycle.

The same is true of the Liberal Democratic Party of Russia (LDPR) whose leader, Vladimir Zhirinovsky, has looked very tired in recent years. His old nationalist fervor has subsided; he doesn’t look like an extremist anymore. Instead, he looks like a perfectly sane and even constructive politician who from time to time shines in the fairly lackluster sky of Russian politics where there is too little excitement. Will Zhirinovsky have the energy to drag the LDPR over the threshold into the Duma? At this point it’s too soon to tell with any certainty, but there is a chance.

The other parties vying for Duma seats at least provide some intrigue.

The ruling United Russia headed by Vladimir Putin (who is not a member of the party, but is its leader nonetheless), plans to go into the elections renewed. The party’s leadership sensed that voters were tired of certain old faces and increasingly irritated by overall lack of attention to the concerns of the voters. Many Russians worry that the country is not coming out of the financial crisis more quickly, and others feel that there is no progress towards solving the country’s many social and economic problems. United Russia is trying to channel this expectation of accelerated development and modernization into a constructive course. At the end of May, Putin announced the creation of a pre-election People’s Front to allow nonparty candidates (up to 25 percent) to win election on the United Russia roster. This reflects the party’s desire to attract fresh faces. It is also expected that ahead of the December elections, United Russia will propose a raft of new ideas. The party machinery and ER-friendly analytical structures are now actively working on an ambitious campaign program. For his part, the still extremely popular Putin will try to convince voters to believe in all these plans.

The other pro-Kremlin parties have also gone through a shake-up in recent weeks ostensibly to improve their election prospects. Center-right Just Russia appeared to take a blow when it’s leader Sergei Mironov had a falling out with his local governor, St. Petersburg’s Valentina Matviyenko. Matviyenko, a member of United Russia, subsequently removed Mironov from his post as speaker of the Federation Council – the third most important post in government. Ironically, this move it likely to benefit Just Russia: Mironov’s “persecution by the authorities” gives Just Russia a more oppositionist image. And although the party currently polls about 5 percent of the vote, Mironov has yet to play his main trump card – Dmitry Rogozin, Russia’s permanent representative to NATO. In the last Duma elections, Rogozin’s nationalist Rodina party easily won 15 percent of the vote. But then it was swallowed up by Just Russia, while Rogozin was sent for “re-education” to the capital of the European bureaucracy. It is likely that Rogozin will return to Russian politics this fall as a member of Just Russia.

And on the center-left, Right Cause, whose electoral prospects had looked very bad, will officially have a new leader by the end of June: billionaire Mikhail Prokhorov. Prokhorov is a controversial figure, but also a colorful one. His reputation as an international playboy is well known, and there is speculation that he wants to increase the workweek from 40 hours to 60, but he has obvious advantages. He is a fresh face in Russian politics; he is not connected with the ruling bureaucracy; he is quite impressive and does well before the TV cameras. In addition, there is a demand in Russia today for party that is both liberal and pro-business; the kind of party that would express the interests not of those waiting for handouts from the government, but of those who want government policies to allow them to realize their potential.

The most interesting thing about the configuration of Russia’s political ahead of the December parliamentary elections is that it depends almost not at all on the answer to the other important question in Russian politics today: who exactly — Dmitry Medvedev or Vladimir Putin — will be United Russia’s candidate in the March 2012 presidential elections.