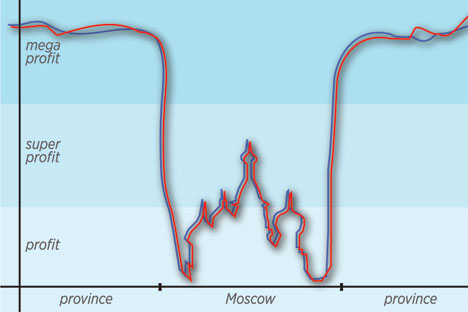 Is it more profitable for a business to set up in the Russian capital or a regional city? The move beyond Moscow has already begun.

Moscow has historically absorbed the bulk of investment and development in Russia — no one was surprised to learn that more than 90 percent of domestic investment wound up in Moscow in 2010. But there are several signs that this trend is coming to an end. Moscow’s overloaded infrastructure, new authorities with a different set of priorities, and exorbitant costs of doing business all are factors that are prompting businesses to explore Russia beyond Moscow.

Due to a combination of market forces and prudent policies, by 2020 the Russian economy will be far more modern, expanding more evenly across the regions. The capital itself will become a far more livable city — and thus more competitive as a global financial center.

New York was once the dominant city for business in the United States. But it became so crowded and expensive that many industries left it for New Jersey or Los Angeles. In the 1990s, Los Angeles went through the same process. Today the U.S. economy is spread out across more than 20 major cities, many of them hubs for specific industries.

In Russia, the move beyond Moscow has already begun, led by the economy’s most innovative sector: Information technology (IT). At least 12 major IT companies have developed or relocated their research divisions to regional cities, including Accenture in Tver; Hewlett-Packard in St. Petersburg; Oracle in St. Petersburg, Novosibirsk, Tolyatti and Ryazan; and Intel in St. Petersburg, Nizhny Novgorod and Novosibirsk.

The key factor is the ability to hire and retain workers who have the training and education that the business needs. Human resource experts already know that the best hires often come from strong institutes in the regions. These schools turn out specialists with skills to match their Moscow counterparts — but with initially lower salary expectations. Once they’re in Moscow, however, the competitive nature of the market makes retaining them an expensive prospect.

It is much cheaper for a business to set up in a regional city, next door to the institute that produces the specialists it needs—with no competitors nearby and cheap real estate.

How does it look from the employee’s standpoint? The traditional path to success for talented young Russians is to move to the big city — Moscow — because there are no good jobs available at home.

But the employee’s housing prospects significantly improve once industry moves to his home region. With 70 percent of a Moscow salary, an average college graduate can afford a mortgage in his hometown, where an apartment is a third of the price of one in Moscow. Kaluga, for example, has a market of more than 125,000 creditworthy buyers, including 25,000 employed at the region’s growing modern industrial parks.

Many businesses locate in Moscow to be near their clients. For the financial services, legal and consulting industries, most clients will always be in Moscow. For other industries, including oil, natural gas and pharmaceuticals, the government is either a partner or regulator, or both.

For most businesses, each function has its own set of factors that determines its optimal location. Most manufacturing functions need to be near abundant, cost-effective labor, not near the customer — except where logistics costs represent a high proportion of total product cost. Some need to be near cheap raw materials. Almost all need access to cheap, reliable utilities.

Accounting and finance, customer service, repair, training and many human resources functions do not have to be near their internal or external clients. Thus, in 2008 Alfa Bank acquired a former factory building in Ulyanovsk and redeveloped nearly 81,000 square feet for support functions. Citibank purchased 65,000 square feet in Ryazan.

Historically, the shift from overgrown cities to the regions has taken place when changing conditions create a better business and living environment there. Clearly, today the factors are there to push business out of Moscow, and now the government is realizing that endless growth is bad for the city and Russia as a whole. Indeed, for Moscow to perform effectively as a modern financial hub, it will benefit from less demand on its infrastructure.

Regions that are delivering a transparent process free of corruption are winning the investment of businesses in Russia.

Kaluga has become the leading example. Four industrial parks combined with the transparent, hands-on approach of the team led personally by Governor Anatoly Artamonov have attracted more than $5 billion in investment and created a pipeline of more than 25,000 new jobs. New business has created demand for higher standards of infrastructure, including housing, hotels, education and medical care. These are the things that improve the quality of life for talented professionals and their families — and will make them choose places such as Kaluga over Moscow.

Companies should not wait for Russia to modernize before they take the plunge into the regions. It’s their plunge that will accelerate the modernization of Russia.