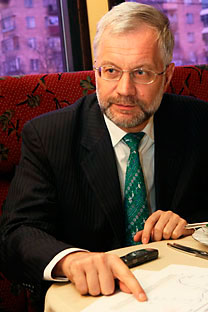 Russia nominates Grigori Marchenko to head the International Monetary Fund in Washington, D.C. An IMF appointment is unlikely but Marchenko is a CIS banker to watch.

Grigori Marchenko, the governor of Kazakhstan’s central bank, the National Bank of Kazakhstan, made no secret of his surprise when he received a text message on his cell phone from Prime Minister Karim Massimov: Russia had nominated Marchenko as its candidate to succeed Dominique Strauss-Kahn at the helm of the International Monetary Fund in Washington.

“I didn't expect the nomination,” he told journalists covering the annual meeting of the European Bank for Reconstruction and Development in Astana, Kazakhstan’s capital, last month.

Marchenko, who is 51, is nothing if not candid and he has a reputation of speaking truth to power – near-absolute power in the case of his boss, President Nursultan Nazarbayev.

Relaxed and self-assured and fluent in German and English, Marchenko occasionally betrays impatience with those who are not familiar with the jargon of macro-economics. Those who are, like Anders Aslund, an economist and Central Asia expert, generally praise him. “He has an extremely impressive personality,” said Aslund, a senior fellow at the Peterson Institute in Washington. “He has a proven record of handling crises well, he has integrity and he’s a good manager. I’d say he’s certainly the most qualified economic technocrat in the former Soviet Union.”

Kazakhstan emerged better than many countries from the financial meltdown that started in 2007, with $37 billion of foreign reserves in the central bank and another $36 billion in the National Oil Fund, which was modeled on Norway’s. Its small population (16 million) and considerable oil exports (1.35 million barrels per day) have allowed it to become a net creditor to the world. Inflation, at 8 percent, remains a concern.

Marchenko, who studied international relations in Moscow, was hired in 1994 as deputy governor of the central bank by Oraz Jandosov, who played a key role in the 1990s in building the only home-grown banking system in the former Soviet Union apart from Russia (the others were largely taken over by foreign banks).

In the early 1990s, scores of newly privatized concerns created pocket banks as a way to get cheap credit from the central bank. By mid-decade, there were 230 of them. “Instead of accumulating savings of the population and of the enterprises and providing loans to those who needed them, they were basically playing the foreign exchange and government securities markets,” Marchenko recalled in an interview several years ago. “Lending was unfortunately marginal and with little collateral.”

So Marchenko and Jandosov began a process that reduced their number to below 40 in less than five years – no easy feat in any country. “He’s as tough as they get,” notes Aslund.

Marchenko left the central bank in 1996 to head the National Commission on Securities and served as stint as CEO of Deutsche Bank Securities (Kazakhstan), returning as governor in 1999.

During the following five years, he introduced Western accounting standards and audits by the big international accounting firms, the first CIS country to do so. Kazakhstan became the financial center of Central Asia, with a banking sector that in many ways was more efficient than Russia’s. Then he helped organize the stock market, which today remains small because the economy lacks many medium-sized companies (most of the large ones are traded in London). Finally, Marchenko oversaw the reform of the Soviet-era pension system.

In 2004, he moved to Halyk Bank, the Kazakhstani successor to the sprawling, old Soviet savings bank, Sberbank, whose branches were almost as ubiquitous as the post office’s. The bank is controlled by Timur Kulibayev, the most successful of Nazarbayev’s three sons-in-law, who is widely regarded as the second most powerful man in the country.

During that stint, Marchenko notably avoided over-investing in the real-estate bubble that had gripped the Kazakhstani economy and the bank weathered the global downturn better than most.

Jandosov, who now a runs a think tank in Kazakhstan called the Center for Economic Analysis, credits Marchenko for his role in reforming the financial sector but faults him for making the bank one of the most secretive institutions in the country.

As for the IMF job, Aslund said, “Marchenko’s main problem is that he has no Western graduate degree in economics and no experience of working in an international organization, even though he has lots of valuable practical experience in dealing with crises – much more than (Christine) Lagarde,” a French lawyer who is France’s finance minister and the apparent choice of Europe and the United States. Given that two-thirds of the IMF’s lending ability is now committed to Europe, another European head appears likely.

In early 2009, Marchenko returned to the National Bank to cope with the crisis. “He handled it quite well,” Aslund said. He sacked Goldman Sachs and Morgan Stanley as financial advisers to Kazakhstan because of conflicts of interests and replaced them with Lazard Frères and NM Rothschild. These helped restructure the debts of three failed Kazakhstani banks, with foreign investors losing about two-thirds of their investment, reports Aslund. “The result was that the whole burden of bank failures did not fall upon Kazakhstani taxpayers, as it did in Ireland,” Aslund noted.